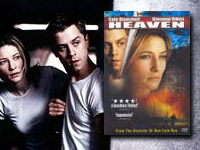 Heaven introduces us to Philippa, a schoolteacher who commits a crime in the name of justice, and Filippo, a policeman who helps her escape, thus raising numerous questions regarding morality, situational ethics, and vindication. Heaven is a dialogically sparse, beautifully and intentionally filmed, image-rich layer of questions: In the face of injustice, to whom can we turn? Is anyone listening? What do we do with guilt? Is Heaven silent?

1. This film is one in a trilogy, the others being titled Purgatory and Hell. The script-writer clearly wants to deal with ethical issues. What are the central ethical issues raised by this film? 2. How does the ending sit with you? Is it satisfying as a resolution, or does it leave too many questions unanswered for your liking? How would you have chosen to end the film, and why? 3. The film opens with an aerial shot and returns to aerial shots throughout the film. Why? What might the writer mean to indicate by them? 4. When we first see Philippa, she’s wearing dark shades and looks lost, angry, and destructive. In what ways has she changed by the end of the film, and in what ways hasn’t she changed? What is/are both the immediate and ultimate catalysts for any changes? 5. Under what moral category would you place Philippa’s bombing? Justice? Revenge? Something else? What was your response to her when you found out her reasons? Was she justified? Is her kind of behavior ever justifiable? Why or why not? 6. In the face of evil, Philippa calls out to the Carbinieri, the keepers of order, to do something. When she decides that they aren’t going to listen, she takes the law into her own hands. Is there a comparison here to what we read in the psalms, especially the imprecatory psalms? How do you tend to react when you feel that your justified complaints and questions aren’t answered, both with people and wiht God? Is there a difference, and should there be? Biblically, what should our attitude be to what we consider unanswered prayer, calls for righteousness, justice, and vindication? 7. Both Philippa and Filippo commit crimes in the name of fighting against evil. Did you find yourself rooting for them to get away? Are there situational ethics here that help determine your attitude? Should you root for them? And what are you rooting for them to do, exactly? 8. Philippa says, “I don’t want to escape punishment. I killed innocent people, and I want to answer for that. But before I do, I want to kill him. That’s the only reason I agreed to escape.” What do you make of that? How do you reconcile that with her escape? Do you applaud her for this initial desire to pay for her crime? Does your attitude change when she escapes? Do you think her desire to pay for her crimes is a normal one? 9. We find out, ultimately, that Filippo assists Philippa, by his confession, because he “love[s] her.” How do you react to that? Is it believable? What kind of love is that? Is there any significance, other than plot-wise, for his being her interpreter? 10. In the Carbinieri Precinct building attic, Filippo breaks down in tears? Why? 11. In the church in Montepulciano, we first hear Philippa confessing, then we pan to see her confessing to Filippo. What do you think the director’s intention here is? After Philippa’s confessing “I’ve ceased to believe . . . . In sense, in justice, in life,” Filippo replies, “I love you.” What kind of an answer is that? 12. Do you see Filippo as a Christ figure, as a second Adam? Consider the following: 13. The film ends with Filippo’s literal ascension, enabling us to understand the opening of the film as his preparation for that ascension. 14. Filippo acts as Philippa’s interpreter, or mediator, for her compaints against evil. 15. Filippo follows in his father’s footsteps; we also see him working in a carpentry shop of sorts at one point. His love for Philippa seems, by all human accounts, unaccountable and unmerited. 16. While in the carpentry shop, Filippo’s brother asks him, as he prepares, whether he’s afraid, and Filippo responds, simply, “Yes, I’m afraid.” 17. Filippo’s father seems, tacitly, to be the only one who understands why he does what he does. Filippo quotes his father as saying, “My father always said that at the right moment, you have to do what nobody expects.” Is there a parallel to the passion here? 18. He returns with Philippa to the place of her birth (her literal creation) (where Philippa responds, upon seeing it, “It’s as if nothing ever happened.” 19. The first thing we see in Montepulciano is a wedding feast. 20. Philippa mentions that she was taking her first communion at the moment of Filippo’s birth, and that she was dressed like a bride and burst into tears when her mother put a veil over her face. 21. When Philippa confesses to Filippo, he responds, simply, with “I love you.” 22. Throughout the film, Philippa and Filippo become so physically identified with each other that they become, by their consummation, as one. 23. Filippo’s father offers to attempt to rescue them, but Filippo refuses. 24. During Filippo and Philippa’s last supper, a loaf of bread and bottle of wine are prominently displayed. Their last free act is consummation and then ascension. What do you make of all of this? And how does this square with his abetting her escape from justice? 25. The director, Tom Tykwer, said in a New York Times interview, “Heaven is about silence . . . but all the silences have ten layers.” What might he have meant by this, and how does the film corroborate? 26. In what ways do the moral ambiguities and complexities parallel or contradict reality? 27. If you were to watch this with an unbeliever, how would you discuss Filippo as a possible Christ figure, and how would you deal with the complexities? 28. If you were to show this to your church, what do you think the overwhelming response would be, and why? Should it be thus, or different? 29. Which character do you most identify with? Most have sympathy for? Most dislike? 30. How does this film mesh with your own ideas of what the word “Heaven” denotes or connotes? What are your culture’s dominant views of heaven, and what good, true impulses might those views indicate? What erroneous views of heaven most need addressing? How important is the topic of heaven, both in the church and in the culture?