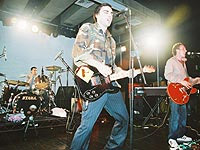 “I wanna be successful…what’s the point of being parochial and small time? You’ve got to think big.” These could be the ambitious utterances of any average bloke, but they happened to be those of British indie-rock Hard-Fi frontman Richard Archer. This little affluent band of eclectic rock from Staines, a borough of Surrey in South-East England, is now a chart topping (#1 in England) and fresh flavor in the musical world. These audiophiles of ‘hard fidelity’ are indeed the self-proclaimed Stars of CCTV (closed-circuit television) and they’ve earned a 2005 Mercury Music Prize nomination and a #1 album in the UK to boot.

Hard-Fi is comprised of Archer, the bollocks and brains, along with guitarist and vocalist Ross Phillips, bassist and vocalist Kai Stephens and drummer Steve Kemp. Their debut album, Stars of CCTV was recorded at ‘The Cherry Lips Hits Facility’ in Staine and produced by Archer and mixed alongside Wolsey White. Having moved from Necessary Records over to big time Atlantic, Hard-Fi has been declared by The Sun , as “Pure foot stomping anthemic genius…Gods in the making.” Well, I’m not going that far but the Stars of CCTV give a fair gamut of highs and lows with an English flair all their own.

From the punk and rock flair of “Cash Machine” and “Gotta Reason” to the more mellow and easy flowing “Move on Now” and “Better Do Better,” it’s a pint of jovial hip fluctuation complete with a white-man’s overbite and a compulsive toe tap on any night of the week you deem worthy, and that includes the Bay City Rollers Saturday Night. Their release and re-release of “Cash Machine” among other singles such as: “Tied up to Tight”, “Middle Eastern Holiday”, “Living for the Weekend”, “Better Do Better”, and “Hard to Beat” have all reached the top 15 on the UK charts with both “Cash…” and “Hard…” reaching the top 40 on the US charts.

Reflections
To preface, it’s very important to acknowledge that the cultural landscape of this band might beset us a bit, i.e. the British roots. Regardless of what side of the ocean it’s on, it has a relevant theme which hinges on livelihood leisure’s like the weekend and the up down again challenges of relationships. If I had to describe it in recognized terms, I’d say it’s a cross between the HBO television series Sex and the City and the movie Swingers. The lyricism covers the gamut of relational dilemma from hooking-up-just-met-you-intimacy to cheating and breakups. The music is overly familiar in tone but enjoyable and the lyrics are a common dime a dozen.

Our reflections should center on the cultural notions of explorative individuality which tends to breed between the hours of 5 PM on Friday and 8 AM on Monday. If there’s one thing most working folk can relate to, it’s working hard all week both “for the weekend” and the “cash machine” in hopes of living life to its fullest at one go around. I don’t know that this music is stimulating in the sense of depth. If you like the style, which I do, then it’s alright. Yet, it’s the themes and the realities of such lifestyle that arouse our interest and beg our reflection and analysis. It has a finger on the pulsating reality of relational enigma and the life that so many tend to spend all their free time and money to achieve, i.e. the mythological and lucid dreams of fantasy that they envision in their mind due to relational emptiness and pop culture exploitation. It captures a flamboyant and bombastic lifestyle that rarely considers consequences and that has little regard for anyone or thing but self. This is the defining characteristic of our post-modern culture but more accurately, the human heart.

Desperately unwilling to acknowledge such, our culture will cling to anything that seems to offer hope, even unrealistic or ideological, to their unquenchable thirst for purpose and significance. Apart from the gospel of Jesus Christ, there is no such reality, truly. Perhaps it might seem contrary to what our culture proclaims, but then again who says our culture has the cornered market on significant relationships. Hard-Fi embodies fun and flashy lyrical tunes that resonate with a culture inebriated on domestic individuality and the naïve illusion of no consequence and to leave such worldview hovering as though adequate and meaningful is to apathetically buy in. So, here is where our call to engage culture with “gentleness and respect” for the glory of God is in frantic need of application.

1. [From “Cash Machine”]
I'll wonder if I'll ever get
to where I want to be.
Better believe it.
I'm working for the cash machine.

What does this song intend/mean? What does the notion of ‘working for the cash machine’ convey? Does our significance and success hinge on how much or little is in that cash machine?

2. [From “Middle Eastern Holiday”]
He's got a gun, bullets meant for me.
Time seems to stand still I'm so scared I can't speak…
I don't understand why it is my mothers crying?
Going on my Middle Eastern holiday.
Give me a gun.
I hope I see my mum again.

With the realities of war all around us, what is ‘just’ war? What is meant by the title, “Middle Eastern Holiday”? How can we think ‘intelligently’ about war?

3. [From “Tied Up Too Tight”]
So we'll ride in my car;
follow the star;
Drive on into town;
with the stereo loud;
take the Great West Road out;
nothing can bring me down;
tied up too tight!
How do you relate to this notion of the city and invincible euphoria? What is meant by ‘tied up too tight’?

4. [From “Gotta Reason”]
Hung around here long enough;
I've seen the smooth, but only caught the rough;
I've got no reason; but wait,
See the new girl in town…
now I've gotta reason
How would you describe the attitude of this song? What is meant by the term ‘reason’? How do relationships give us this sense of ‘reason’?

5. [From “Hard to Beat”]
Can you feel it?
Rocking the city…straight out of nowhere-ness…
You know I love ya, just wanna touch ya.
Stand up knock me right off my feet.
Hard to beat.
How does our culture perceive marriage in comparison to ‘hooking up’? What is meant by ‘hard to beat’? How do you differentiate love and lust?

6. [From “Unnecessary Trouble”]
There's just no point in cause unnecessary trouble.
Just make sure you cause trouble when it's necessary…
It's necessary.
What is meant by ‘necessary’? What determines when trouble is or isn’t necessary?

7. [From “Move On Now”]
Baby, Baby I think its time we move on now.
Looking out my bedroom window
See the planes take off from Heathrow.
I think about the places I'd go.
I think about this place I call home…
all around.
When is it time to ‘move on’ in relationships? What authority governs how we establish and cease relationships?

8. [From “Better Do Better”]
You think I'm gonna take you back!
You'd better do better than that.
I'll tell ya how it’s gonna be,
don't you never ever come near me
What attitude would you assign to this song? What does forgiveness look like in non-Christian intimate relationships? Does is look differently in Christian relationships?

9. [From “Feltham is Singing Out”]
It started off alright.
We'd go out Friday night…
do whatever made us feel alright.
You only live once—I thought.
Till I got caught…
Heartbreak, a sickness I can't see.
Feltham is singing out.
How do you define infidelity in relationships outside marriage? Is this genuine regret or consequential guilt? What is meant by ‘a sickness I can’t see’? If you can relate to this song, how do you offer hope in similar circumstances?

11. [From “Stars of CCTV”]
Stick 'em up.
Give me the money…
I'm gonna get my face on the 6 'o' clock news.
We're the stars of CCTV.
Making movies out on the street…
On every corner, every street.
Down every underpass you'll see.
Somebody's stealing the show.
Flashing blue lights, camera, action.
Watching my life, main attraction.
How do you feel about local network news? What do you attribute the central motivations of crime? What is intended by “stars of CCTV”? Do we more often watch these lives than serve them? How should the Church respond?