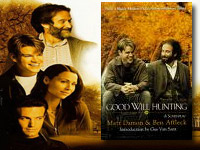 Good Will Hunting took me by surprise. With Robin Williams playing the part of a psychologist to a desperate and abused young man, I was expecting a stale recycling of Dead Poets Society. Thankfully, my expectations were turned on their head.

The main character, Will Hunting, is a twenty-year-old delinquent with an abusive past and no ambition, yet he’s not your average loser. He has a photographic memory and likes to scribble complex theoretical math on his mirror with an erasable marker in his spare time. Not just complex math, understand, but the most advanced kind of math that baffles the leading mathematical minds in the country. One night, Will notices a difficult equation on a blackboard in the hallway of MIT, where he is working as a janitor. With barely a pause, he scratches out a proof, and the stunned professor tracks him down.

Herein lies the crux of Will’s conflict: Up to now, Will has been happy guzzling beers and beating up neighborhood enemies with his buddies, but now he finds himself standing on a psychological minefield, forced to come to terms with his past and choose his future, to weigh responsibility with desire. In the process, we are treated to an excellent exploration of the meaning of loyalty, education, class, money, love, and forgiveness.

Good Will Hunting is a movie worth seeing, and not simply because it won Best Screenplay at the 1997 Academy Awards. It will move you and give you plenty to discuss.

1. What motivated professor Lambeau to pursue Will? 2. Were Lambeau’s motives right or wrong? Why? How does he define success and failure? Do you sympathize with him? Why or why not? 3. What was Sean’s approach to Will? Were his motives right or wrong? Why? How does he define success and failure? Were your sympathies for Sean stronger or weaker than for Lambeau? Why? 4. Sean extends forgiveness to both Will and Lambeau. Is this a sign of strength or weakness on his part? Why? Would you have been as forgiving if you were in his place? What other instances of forgiveness did you see in the movie? 5. Throughout Good Will Hunting there are episodes of tension between different groups of people—i.e., poor vs. rich; uneducated vs. educated; conceited vs. humble; successful vs. unsuccessful; powerful vs. powerless. Was the tension realistic or simply made-for-the-movies? Was there any resolution? Does the Christian world and life view offer any additional possibilities for resolution? 6. Do you think Will’s final decision was the correct one? Why? What does his decision say about his values? 7. As a Christian, how do you respond to the value system of Will Hunting? Of Lambeau? Of Sean McGuire? Of Skylar? 8. What is the significance of the movie’s title?