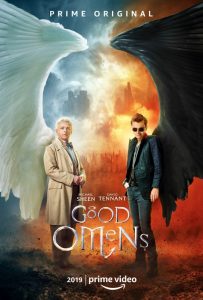 I came to appreciate Neil Gaiman as a storyteller and fantasy author by reading his 2001 novel American Gods. In it he depicts American society not as a marketplace with competing political and economic forces but as a spiritual battle waged between gods, old and new. He broadens our perspective past the petty detritus of daily life to see the normally hidden powers and principalities that animate them.

‘The TV’s the altar. I’m what people are sacrificing to.’
‘What do they sacrifice?’ asked Shadow.
‘Their time, mostly,’ said Lucy. ‘Sometimes each other.’

Gaiman is correct: we are worshipping beings, and even those who profess to believe in no religion still believe something, still foster a vision of the good life and still consecrate something as the center of their existence. We live surrounded by competing idols and rival kingdoms.

So, when I heard Gaiman was developing Good Omens (2019) as a television series I wanted to watch it. The series is based on a novel of the same title published in 1990, co-authored by Gaiman and the late fantasy author Terry Pratchett (1948-2015). An Amazon/BBC production of six episodes directed by Douglas Mackinnon, it’s about the end of the world.

Good Omens is a comedy—a comedy about a tragedy, the final tragedy. The story goes something like this: At creation an angel (with the flaming sword) and a demon (the tempter / snake) have been assigned to work on earth. Now, in 2018, however, suddenly the announcement reaches them (from above and below, respectively) that the time for the end has arrived. They find this upsetting—they’ve grown to rather like their comfortable lives on earth. So they agree to work together (sort of) to keep Armageddon from occurring. Trouble is, they’ve lost track of the Anti-Christ—the boy was mistakenly adopted at birth by the wrong parents—and so things are in a bit of a mess and they find themselves up against a rather strict time limit. The story unfolds from there.

In reality, Good Omens is a satire on Christian beliefs. Episode 1, for example, opens with God speaking, voiced by the veteran actor, Frances McDormand:

Current theories on the creation of the Universe state that, if it were created at all and didn’t just start, as it were, unofficially, it came into being about fourteen billion years ago. The earth is generally supposed to be about four and a half billion years old.
These dates are incorrect.
Medieval scholars put the date of the Creation at 3760 BC. Others put Creation as far back as 5508 BC.
Also incorrect.
Archbishop James Usher claimed that the Heaven and the Earth was created on Sunday the 21st of October, 4004 BC, at 9:00 a.m. This too was incorrect. By almost a quarter of an hour. It was created at 9:13 in the morning, which was correct. The whole business with the fossilized dinosaur skeleton was a joke the paleontologists haven’t seen yet.
This proves two things: firstly, that God does not play dice with the universe. I play an ineffable game of my own devising. For everyone else it’s like playing poker in a pitch-dark room, for infinite stakes, with a dealer who won’t tell you the rules, and who smiles all the time.
Secondly, the Earth’s a Libra.

I have not read the book, so these comments are limited to the TV series, but I started losing interest around the 4th episode. I thought the pacing faltered, and that some parts of the story strained plausibility—even granting the story line and world imagined by the authors. On the other hand I appreciated Gaiman’s and Pratchett’s skill in writing satire. They have a dry wit; this is comedy, and in many places the humor works, not just to make me laugh, but to surprise me into seeing something in a new light. After all, I had never before wondered what it might be like for an angel to team up with a demon to avert the Apocalypse.

The question I’d like to address here is how Christians should respond to productions like Good Omens.

I suspect the series will offend and anger many believers. The doctrines embodied in the story of creation, fall, redemption and restoration are very precious to me. They not only shape my life and thinking, they provide the best expression of reality and our humanity of any story yet told in human history. Still, in a pluralistic and increasingly post-Christian world we must not be surprised when unbelievers satirize our beliefs. At least they consider my beliefs significant enough to spoof. The scriptures insist I must live at peace with my neighbors, even those who scoff at and make fun of my faith.

What grieved me about Good Omens is not the satire but that much that is satirized is not historically orthodox biblical doctrine. Instead, they spoof a host of popularly held but badly mistaken versions of Christian belief. It grieves me that such nonsense is attributed to the faith, and even more that many theologically and biblically illiterate believers actually buy into them.

The demon, Crowley, for example, is courageous and formidable, a creature people tremble to meet. The angel, Aziraphale, is cuddly and soft, reserved and affable. This is simply the opposite of biblical teaching. Heaven is depicted a place far removed from earth—not a renewed earth—devoid of art and music, good food and all other good cultural gifts of God. The brief views of it in the series are not of a place I would like to visit, to say nothing of being there for eternity. It is little wonder that the angel Aziraphale prefers life on earth. And the Apocalypse is not imagined as a time of judgment when justice finally will be rendered for all the brokenness and suffering inflicted throughout human history. It is not a final victory for righteousness and grace when all that is broken is undone and made better than it was in the first place. Rather it is depicted merely as a final, brutal battle between good and evil, between the forces of heaven and hell. This is a vision of the end that has missed the significance of Christ’s resurrection and supposes the struggle between good and evil has yet to be decided. There is more, but these examples can suffice. This is not what I believe.

I suppose Good Omens could be taken as a reason to encourage authors like Gaiman and Pratchett to do more research into what Christianity actually teaches. I prefer to take it as a sign that Christians are not doing a very good job communicating what we actually confess as true. It might even be a good exercise for believers to watch the series to identify all the mistaken beliefs and then to discuss how to communicate the real biblical doctrines in a way our non-Christian neighbors might be able to understand and appreciate. That might not stop them from satirizing our beliefs, of course, but I’d rather they had to wrestle with the real version.

Part of the reason Good Omens works as comedy is that the version of the faith it is satirizing is worthy of it. It’s easy to make fun of a heaven that everyone will find boring and sterile. More difficult would be to satirize a new earth and new heaven that fulfills not merely the best hopes of justice and humanity and righteousness, but far exceeds our wildest hopes by having the resurrected God-Man in whom is life eternal design it specifically for us as persons made in the very image and likeness of God. C. S. Lewis defines it as, “The whole Nature or system of conditions in which redeemed human spirits, still remaining human, can enjoy participation [in the Divine Life beyond all worlds] fully and forever.” It’s easy for me to see how that might be disbelieved; it’s harder to imagine it being satirized effectively.

Sadly, many non-Christians have not rejected biblically orthodox Christianity but merely a bowdlerized imitation of the faith. I have been praying that Good Omens will not add to their number. Beyond prayer there is little or nothing I can do to keep that from happening. I can, however, be willing to explain what the faith really claims and to live in such a way that the reality of Christ and the beauty of his kingdom make the idols and rival kingdoms of our age to withdraw into the shadows where they belong.