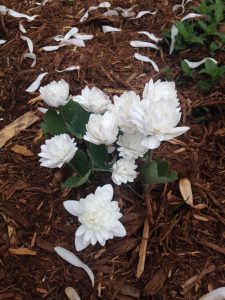 Going Home
We are saddened by the recent death of Denis’ mother. At the same time just when we’d almost lost hope of spring ever arriving, the Northern blood root in my garden poked her green tongues through the frozen ground. Ever in need of redirecting my wandering heart, Holy Week is here now to remind us of the true Hope we have in Jesus.

Recently, I came across an essay written 20 years ago when a dear friend, MaryJane Worden Clark died. Twenty years! As if we cannot comprehend the passing days of our lives we often declare: I can’t believe it’s been that long! Today it seems appropriate to resurrect it during this season of our lives:

Three days before she died, MaryJane, wrote:
It’s interesting to look back just a few days, and see how gradual, but inexorable this process is. (When was the last time I drove the car? Went for a hike? Felt like going out for dinner?) For awhile I was pretty intentional about anticipating all those ‘last times’ … but now it just seems to be happening. (Hmm… I wonder if I’ll ever have the strength to do a real shower again?) And while there seems to be little point in lamenting what’s past, I do miss a lot of the small pleasures, like enjoying food, being able to take a walk comfortably, even just getting my body in and out of bed. Every day I’m surprised at how much less energy I have …

Another frustration is not being able to get beyond a shallow, superficial level spiritually and emotionally. Drugs, I think. And so I continue to depend on you, friends, to remind me that God promises to be present with us through each part of the journey. I also need reminders that there can be something redemptive about pain and suffering…it’s easy to lose sight of that in the swirling chaos of pain and discomfort that sometimes overcomes us here.

Four weeks earlier, MaryJane and her family held a Celebration of Life. Knowing that she was in the final stages of melanoma she did not want to miss her own funeral so she invited the people she loved to join her for a good-by party—an afternoon of singing, Scripture reading, sharing of prayers and memories, and a thirty minute roast of her life that had everyone laughing and crying. We were unable to join them, but so thankful that we’d visited MaryJane and Harry only three months earlier.

On March 31st she went Home.

Waiting for Consolation
Who or what consoles when you lose your best friend, your life companion, your wife, your mother?

In the middle of the last millennium, 1553 to be exact, Louis de Marc was held in the French prison at Lyon. While awaiting the sentence of death for heresy, he wrote this to the reformer, John Calvin:

Sir and brother,
I can not express to you the great comfort I have received from the letter which you have sent to my brother, Denis Peloquin, who found means to deliver it to one of our brethren who was in a vaulted cell above me, and read it to me aloud, as I could not read it myself, being unable to see anything in my dungeon. I entreat of you, therefore, to persevere in helping us with similar consolation, for it invites us to weep and to pray.
– From Letters of John Calvin, Bonnet Edition.

Shortly after Louis de Marc was burned at the stake.

Late last year, after the holidays, [This was 20 years ago] our granddaughter, Manessah, sat on the bottom stair in our living room sobbing. In her arms she clutched her blanket, pillow, and stuffed giraffe. As her mom’s laundry basket, full of her clothes and books was carried past on its way to the car, she tried to rescue it from relatives who had apparently become thieves. Someone was even taking her new boots and putting them in a box! Four days of festivities had crashed every system in her two and a half year old soul and she was inconsolable.

How often in the after math of disasters, deaths, or even holidays do we find ourselves sitting on the bottom step in need of consolation? Sad that life is not what we long for? Depleted of energy and hope from living in a fallen world? Or suspicious because we don’t get what God is up to? And if we don’t know what he’s up to can it be any good?

The Power to Console
Two-thousand years ago Jesus was only eight days old when he was brought to the temple for dedication and circumcision. Joseph and Mary weren’t expecting a special welcome, but for years an old, old guy had been watching for just this moment and he spotted them in the crowd. Simeon, we are told, was waiting for “The Consolation of Israel”. (Luke 2:25) How did he recognize them? What drew him? Did the hair stand up on the back of his neck? When Simeon saw them the Holy Spirit must have blazed inside. Hurrying over and taking God in his arms, he cried, “My eyes have seen your salvation.”

Long ago certain East Indian sultans were called by a similar name: “The Nutmeg of Consolation.” An intriguing title as nutmeg was a prized and valuable spice in the East Indies. In the sultan you might find both the pleasure of his rare presence and the power to remedy your troubles. Might. That is, if his curry had agreed with him. Or if he were still in the mood to receive petitions. But of course now sultans are mostly a thing of the past. That’s only one reason why none can match “The Consolation of Israel.” Jesus is the only one who has the everlasting presence and divine power to allay sorrow and grief. To console us from our sin. To comfort us in darkness. As Calvin writes in the above mentioned letter:

…we have wherewith to comfort ourselves in all our miseries, looking for that happy issue which is promised to us, that He will not only deliver us by His angels, but will Himself wipe away the tears from our eyes.

So there it is. From the small child to the prisoner of Lyon, “The Consolation of Israel” brings us miracles as small as a letter that arrives at the perfect moment and as large as a shining escort through the door of this life into the next.

I am certain some of God’s consolation flies too high for my radar to detect. Some of it I see but don’t understand. This I get: Jesus Christ’s salvation has begun in me, and without fail he will bring it on home. That is not only Consolation, it is Joy.

Post Script About “The Nutmeg of Consolation”
You may recognize this as the title to one of Patrick O’Brian’s series of seafaring novels. In O’Brian’s book it is the name of a ship the captain imagines owning one day.

There were several other meanings to the phrase. Together Captain Aubrey and Stephen Maturin, his close friend and companion, played classical music together as a pastime on their long voyages. It was the title of a piece of music as you see in the following snippet of conversation. It was also an honorific for a sultan.

Captain Aubrey: I dare say, what was the last piece?
Stephen Maturin (ship’s surgeon and intelligence agent): Nutmeg of Consolation.
Aubrey: That’s it. Those were the very words hanging there in the back of my mind. What a glorious name for a tight, sweet, newly-coppered broad-buttock little ship – a solace to any man’s heart… Dear Nutmeg. What joy.

To see the Nutmeg hove into sight, her sails sheeted to the wind, and you cast-away on an island with no hope of rescue—that would indeed be Consolation.

Although I have recommended this series of books before, I do it again. Begin with the first one MASTER AND COMMANDER. It is great summer reading.