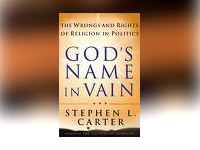 In the spring of 1994, I was interviewed by the emergency medicine group in which I am now a partner. Besides the usual questions, there were two that surprised me. They regarded my opinion on scientific creationism and abortion. I answered the questions as truthfully as I could, all the time thinking, “This shouldn’t be happening in a job interview in America.” Yet the physician who asked those questions understood that religion matters and because it does, it cannot be limited to a merely personal sphere. Or as Yale Law Professor Stephen Carter says, “A religion that makes no difference in the life of the believer is not a religion worthy of the name” (p. 189).

In the book, God’s Name in Vain, Carter explores how religion should be allowed to participate in the square of public debate and politics. His answer springs from a vision of religion as a moral institution, counterbalancing the power of the state. Religion is “…subversive of the culture it inhabits. As long as religion avoids the temptation to join its authority to the authority of the state, it can indeed play a subversive role, because it focuses the attention of the believer on a source of moral understanding that transcends both the authority of positive law and the authority of human moral systems” (p. 30).

When religious institutions behave in a partisan manner, when they accommodate, when they compromise, they can no longer be subversive. A religious community that adheres to a particular political party’s vision of society might not necessarily be adhering to God’s vision for society. A religious organization that finds itself within the power structure of the state may find it increasingly difficult to criticize that state.

Just as the press serves to alert citizens to injustices committed by the state, the First Amendment protects various religious communities so they can flourish unhampered by state interference, developing their own transcendent morality which can then be usefully brought to public scrutiny. Carter asserts that earlier Americans understood this concept well, using the illustration of a garden of religion being protected by a wall of separation from the state. Within this garden religionists could work in community toward a better understanding of God and morality, and when ready venture into the wilderness of the state, to affect change. Earlier Americans not only felt comfortable injecting religious imagery and convictions into public debate, but used their morality to create tremendous political change.

Things are different now because Americans poorly understand the First Amendment. Rather than being a metaphorical wall of protection around religion, it is seen as protection for the state from religious extremism. The problem is that the state, having all the power, doesn’t need protection.

Religion was a driving force behind the abolition of slavery, the crusade to aid the impoverished, and the civil rights movement. Each of these major political causes is seen by most as worthy and noble causes, yet the First Amendment today is used by liberal organizations to silence the political voice of religious organizations hewing to conservative politics. This is an abuse of the law and may hamper future progressive causes.

Carter explores “issues over which religions might choose to resist” (p. 121): when a country with the military might of the U.S. should use that power; how and why religious communities should resist popular culture.

In the chapter, “Measurism,” Carter warns against the postmodern practice of accepting all moral values as equally valid unless there are statistics to back up one’s claim, leaving us “capable of asserting moral positions and hewing to them strongly, but utterly incompetent in defending them in ways that are persuasive…” (p. 138). Until we learn to argue our case persuasively in religious and ethical language, which opens the eyes of our opponent to a God he had previously not seen, we will be serving a limitless God in a limited way.

Unfortunately, the book leaves a few key questions unanswered. For instance, if earlier Americans had little difficulty injecting religion in politics, what happened? No matter how appealing Carter’s vision is of religion in politics (and I must admit it is very appealing), it will be difficult to bring religion back to the public square until we see why it was forced out in the first place.

God’s Name in Vain is written by one who truly believes “the Christian life should not be about getting the right candidates elected or advancing the right agenda. [It] should be about living in a way that Christ’s light shines forth” (p. 115). God’s Name in Vain clarifies how that vision can become a reality in the public arena of our nation.