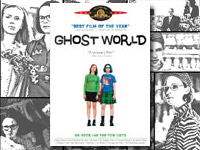 Enid and Rebecca have just graduated from high school, and they’re let loose to spend their summer in, by their estimations, a lame town, a culture filled with corporate influence and fake cool. Their cynical attitudes toward their surroundings show through in their attitudes toward just about everything else, from family to work to relationships. As a result of a joke they decide to play on a man who places a personal ad in the paper, Enid and Rebecca are forced to put a name and a face to their cynicism, and they respond to their situation in different ways. As with most post-high-school tales, the protagonists are forced to reflect on what it means to become an adult in a complex world that doesn’t always fit with the ways we prefer to view it. And as we watch them interact with this world, we, too, are led to question how we have chosen to view the world and, relationally, what our choices lead us to.

1. What was your emotional response to the film as it ended? How did that compare to your response(s) during the first 15 minutes of the film? How much of your response is contingent on the way you feel personally about the characters in the film? 2. As a film largely contingent on characters, and largely seen through the eyes of one character, how do you account for a change in sympathies within a 90-minute span? How do movies affect us so quickly, and how does that compare to the way we view people we know? 3. What are the effects of the opening scene (the Indian video interspersed with windowed snapshots of neighborhood families)? 4. What was the purpose of the valedictorian’s speech, which ended with “faith, hope, love, and above all a sense of humor”? How did this scene prepare you for the tone and characters in the film? 5. What was your response to the immediacy of Enid’s cynicism and her treatment of others? Why did you respond that way? People often say that the things that annoy us most deeply are often the things we’re most guilty of. Do you think that’s true in this case? In general? 6. How do the filmmakers cast characters to guide your responses to the film? Do you think we do similar casting in our real lives? 7. How did you respond to the first diner scene with Seymour? How do you think both Enid and Seymour felt afterwards? Based on any different responses, what do our assumptions about their reactions say about our own personalities, histories, etc.? 8. What is the turning point in Enid’s opinion of Seymour? Do you think Rebecca plays any part in that? Consider Enid’s assessment of Seymour: “He’s the exact opposite of everything I really hate. In a way, he’s such a clueless dork, he’s almost kinda cool.” 9. After Enid has visited Seymour’s garage sale, how has your initial opinion of Enid shifted? Consider the following: Why is Enid attracted to the Skip James song on the record she buys from Seymour? When her art teacher calls her art “amusing and light entertainment,” why is Enid apparently bothered if she doesn’t respect her art teacher? Does she have a reason to be bothered based on what you know about her? 10. At this point in the film, Rebecca begins to differentiate herself from Enid. Why? Does something precipitate the change, or has it been a long-time coming? What effect does this have on Enid? How does it change your opinion of both of them? Do you sympathize more with one of them? How big of an effect does comparison have on our relationships? Should it? Why do Enid and Seymour become increasingly attracted to each other? 11. One of the characters responds to the Coon Chicken logo by saying “People still hate each other, but they just know how to hide it better.” Do you agree? What is the preferable way to respond to that? What do people hide behind? 12. What is the significance of Enid’s garage sale? Why do you think she decided to sell her stuff in the first place, and then take it back? What role does “stuff” play in our lives? 13. After Seymour starts seeing Dana, why is Enid hurt? Were you glad for Seymour? Why do you think he kept seeing Dana? 14. Seymour mentions that his number one fantasy had been to disappear into a random place, but not anymore. How did you respond to that fantasy? Why do people in general find that appealing? Why didn’t he want that anymore? 15. What effect did Enid’s spending the night with Seymour have on the both of them? How do you think they processed that night differently? How does physical intimacy affect our emotions, and how do you think believers should understand the connection (or lack) between the two? 16. What is the significance of the man at the bus stop? Of the ending? Is it real, imaginary, or does it matter? Recall that when he sat on the bench, which said “Not in Service,” his body blocked out the middle so that the viewer saw only the letter “Not ice.” What is the significance of this? 17. What is the significance of the title “Ghost World” (which originally appeared as a comic book)? Do you think that it’s a commentary on suburbia? Commercialism? What’s the connection with the opening scene? The closing scene? 18. What is the effect of defining our lives by negation, which is the heart of cynicism? Do Christians have justification for being cynical? How does cynicism appear in the church? How does it affect those outside the church looking in? Do you think Jesus was ever cynical? How does the believer deal with cynicism? 19. What does the film say about generational differences? How does this compare to the church’s view (or at least her practice)? 20. What does this film say about the role of art in our culture?