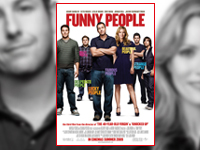 Apatow and Aristotle on Friendship

I went into the theater expecting to love Funny People. I’d been pleasantly surprised by the way Judd Apatow’s first film, The 40-Year-Old Virgin, questioned some of our current cultural obsession with sex and stood up for the virtues of premarital abstinence (albeit of a limited sort). I’d found myself laughing and crying at the end of Knocked Up, Apatow’s sophomore effort, which follows the highs and lows of a young couple who decide to have the baby they accidentally conceived on a night of careless partying. So, when I heard months ago that Judd Apatow would be trying his hand at drama for his third movie, I was primed to like it.

“So, first impressions?” my friend prompted as we left the theater, knowing I was slated to write this review.

“I’m disappointed,” I replied. “Not as good as I was hoping.”

Since that night, though, I’ve had a chance to revise my initial take. Frankly, I haven’t been able to forget Funny People. The characters have stayed with me, endearing themselves. And I’ve been trying to figure out why…

Judd Apatow has been the helmsman for a fleet of recent “bromantic comedies.” Aside from writing and directing Virgin and Knocked Up, Apatow was the creative trust behind the raunchy male-friendship flicks Superbad, Step Brothers, and Pineapple Express (to name a few). Critics have noted, and sometimes bemoaned, Apatow’s virtually exclusive focus on male characters. As Joel Stein put it in Time magazine’s recent profile of Apatow, “His films are about men growing up and men helping men grow up.” Seth Rogen, who plays in almost every Apatow flick, adds of his regular co-stars, “We’re all really uncomfortable around girls, for the most part. I imagine that has something to do with it.”

A case could be made that Funny People’s riffs on the friendship theme are more amped than is usual even for an Apatow movie. The story follows a season in the life of George Simmons (Adam Sandler), who got his start in Hollywood as a stand-up and eventually landed the lead roles in several wildly successful comedy flicks. Early on in the film, George is diagnosed with a rare form of leukemia and given a dismal prognosis. As a kind of self-therapy, he bows out of the acting scene for a while and instead takes a few stand-up gigs in an effort to get back to his roots. He stays late at a club one night, after his bit is done, and meets an aspiring young comic, Ira Wright (Seth Rogen). Knowing his time is short and looking for someone to talk to, George awkwardly asks Ira if he’d want to be his personal assistant—you know, someone who can help him write jokes, drive him to his gigs, and—George suggests with surprising, embarrassing vulnerability—sit with him by his bed at night while he tries to fall asleep.

Much of the film is taken up with the slow, meandering development of George and Ira’s relationship. Sparks occasionally fly (“You’re my best friend, and I don’t even like you,” George tells Ira in a huff in one scene), but the real test of friendship comes late in the film, when Ira feels compelled to stop George from having an affair with a married woman. Can he do what needs to be done, what’s right, without destroying the camaraderie he shares with George?

Whereas male bonding played a vital, if ancillary role in The 40-Year-Old Virgin and Knocked Up, male friendship is front and center in Funny People. And it’s just that, it seems to me, that makes Apatow’s third film worth thinking about.

Ours is a culture confused about friendship, not least the kind of male friendship on display in Funny People. We have trouble imagining close friendships between men that aren’t, somehow, sexualized. (Which means, probably, that we’ve lost any sense of true friendship. “Those who cannot conceive Friendship as a substantive love but only as a disguise or elaboration of Eros betray the fact that they have never had a friend,” C. S. Lewis bluntly opined.)

But we also seem to have trouble imagining friendships in which growth in virtue is a primary aim. We’re comfortable enough with casual “hanging out,” or even (restrained, oblique) displays of affection. But many of us struggle to choose friends who can, in Aristotle’s words, “make us feel ashamed of doing what is really wrong.” We have difficulty believing that “we do not merely have the capacity to be friends with beauties and rationalizers, jokers and daredevils, but also with someone who is concerned with what is good and what is true,” as Andrew Sullivan colorfully paraphrases Aristotle’s insight.

And maybe this is where the real cultural significance of Funny People lies. By portraying a same-sex, non-erotic friendship in which one character is forced to confront another character’s lack of virtue, the movie provides an occasion for a conversation about what real friendship might involve. I’ve thought several times in the days since I saw the movie that Funny People could be a jumping-off point for a wide-ranging discussion of Proverbs 27:6, “Faithful are the wounds of a friend.”

There are, admittedly, good reasons for thoughtful viewers to take a pass on seeing Funny People. The movie has more crass humor than probably any film I’ve seen to date. But for those who do choose to watch it, I suspect the payoff won’t be nil. Indeed, it may be a far cry from nil. Like me, you may find yourself unable to forget the characters, and the questions their lives raise, for quite some time. And maybe, too, you’ll become a better friend in the process.

1. George Simmons is a man who has made a career out of comedy—and now he’s dying. What are the effects of this intersection of silliness and seriousness? How well does the movie do at exploring that intersection? 2. Does the movie have any recognizable theology or philosophy of death and dying? How does humor serve to blunt (or sharpen) the dark sense of death hanging over the characters? 3. How well does the film hang together? Critics have noted a clear two-act structure, but do the two acts cohere very well? Why or why not? 4. How would you describe Laura’s character? What does she contribute to the story? Is she a fully-formed, three-dimensional character? Why or why not?