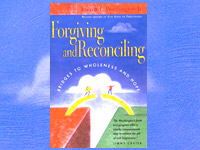 We pray, “Forgive us our trespasses as we forgive those who trespass against us…” then think:

I don’t know if I want to.
I don’t even know how.
It seems like it would take forever, if it is even possible.

At the emotional crest of that excruciating dark night, I wanted
relief from my anger. I needed a rock that would steady my
reeling view of the world and myself. I wanted to know and do
what God wanted me to do…I wanted to forgive if it would
help me deal with my pain, anger, hurt and sadness.
If only I could forgive, I thought, I could have peace. (p.23)

We bring our own pain to the task, looking for relief. It is difficult to leave self-interest behind. We want peace and we want God’s forgiveness (Matt. 6:14 & 15).We know that forgiving is also about giving. The gift is forgiveness itself that only we can give someone who has injured us. But how can we do this, when we feel hopeless and often bitter?

In his book Forgiving and Reconciling, Everett L. Worthington, draws on his own experience of his mother’s murder and years of careful research on forgiveness, to show us the way to give forgiveness and find the peace and blessing we seek. Worthington understands that it is easier to forgive from our own self-interest than for the good of another, but his research has found that the deepest and longest lasting forgiveness is born out of an empathic motive to forgive the one who has injured us. He shows us the difference between decisional forgiveness and emotional forgiveness and how we must bring both to the task.

In his excellent chapter on “The Christian Foundation of Forgiving,” he shows the human and divine sides in forgiveness. He says, “Basically, we are incapable of truly forgiving in a spiritually meaningful way under our own power. Through Jesus’ work applied to us…He can work forgiveness through us” (p. 67). Still we must cooperate with our Lord.
Worthington’s research not only helps us to understand forgiveness but also guides us in the practice of forgiveness in a deep way. It is not difficult to understand if we consider the emotional dynamics of unforgiveness—a blend of the negative emotions of bitterness, anger, hatred, hostility and fear born out of a perceived hurt that is registered physically throughout the body—that forgiveness is also emotional. In fact, the body cannot hold both a negative set of emotions and a positive set of emotions at the same time, one will prevail in expression. Worthington explains:

Forgiveness is defined as the emotional juxtaposition of positive emotions (such as empathy, sympathy, compassion, agape love or even romantic love) against (1) the hot emotions of anger or fear that follow a perceived hurt or offense or (2) the unforgiveness that follows ruminating about the transgression, which also changes our motives from negative to neutral or positive. Positive emotions are juxtaposed against—or experienced at the same time as—the negative emotions…the positive emotions reduce the intensity of the negative emotions. If the emotional juxtaposition is strong enough or last long enough, the unforgivenss is changed so that it can never be experienced again in the same way. Emotional “replacement” has occurred. (pp. 41 – 42)

This does not mean that the hurt is forgotten but that it is remembered with a different set of emotions associated with it, “amity is substituted for enmity.” Worthington goes on to explain in depth how emotional replacement works in the first of five steps to reach forgiveness—recalling the hurt. It is with a changed heart we can offer the agape love of forgiveness to another. Often, it is only by the power of the Holy Spirit and the indwelling Christ that we are able to reach positive emotions such as empathy, sympathy and compassion. Worthington shows us how to cooperate with this process. Emotional forgiveness brings the healing that decisional forgiveness alone cannot. They are both needed, but the feelings do not always follow the simple decision to forgive, especially if the hurt is a deep wound. Worthington says, “God wants us to grant decisional forgiveness eagerly…but also to experience a heart change in which the (emotions) of unforgiveness are replaced with the sympathy, empathy, compassion and love of emotional forgiveness” (p. 55).

In order to reach the heart change that God desires for us, Worthington has mapped out a five step process. The steps spell out the acrostic REACH: Recall the hurt, Empathize, Altruistic gift of forgiveness, Commit to forgive publicly, Hold on to forgiveness. Many who have been deeply hurt, might give up right here. I would encourage those who have been deeply hurt to keep going, but also to engage a trusted friend, mentor, spiritual director or counselor in the process. Worthington shows great sensitivity and compassion as a counselor who knows the difficulties along the path both from his own experience and from years of research and working with others on forgiveness. He does not set us on a course of recalling hurt without some specific guidelines for avoiding pitfalls. He also suggests we start with smaller hurts in past relationships to practice for the deeper hurts and forgiveness needs. When we have objectively recalled the hurt then we are able to move on to empathy and the altruistic gift of forgiveness. Again, Worthington carefully defines empathy and giving the gift, which is not about forgetting the offense, but is rooted in Christ’s forgiveness. He is faithful to the Scriptures in each step.

Worthington spends the final part of this book on helping us to understand when and how reconciliation is possible in a relationship that needs the healing of forgiveness. He discusses the barriers to reconciliation and introduces us to the bridge model of reconciliation, which again is a stepwise process.

Worthington charts our battered hearts to a way to hope in Christ through this fine work of Christian scholarship and Christian compassion. Forgiving and Reconciling is a worthy guide for the will, the way and the perseverance to the healing of forgiveness.