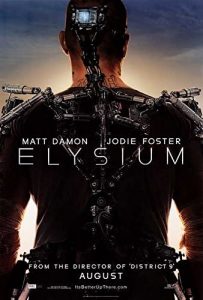 I watched Elysium because I am fond of science fiction and believe it one of the best genres in which to explore the deeper questions of life.

Elysium is written and directed by Neill Blomkamp, who had (partially) impressed me with District 9 (2009). That alien adventure film is interesting but flawed because Blomkamp seems so eager to make certain we understand his message that he loses all subtlety, making the story a heavy-handed allegory. It’s hard to miss the relationship between District 9and apartheid: the aliens landed in Johannesburg, South Africa, were kept in an isolated township called District 9 (like District 6 where “Cape Coloureds” were forced to live before being forcibly relocated), the plot is about the forced relocation of the aliens, and the alien’s speech includes numerous clicking sounds similar to some black African languages. “Despite its creativity,’ critic Roger Ebert noted, “the movie remains space opera and avoids the higher realms of science-fiction.” Still, it was creative, especially visually. The sets were striking and both wide-angle shots and closer shots including background details revealed a director who knew how to express ideas visually.

Since Elysium stars Matt Damon and Jodie Foster, I hoped that it would be a better film, but was disappointed. The allegory remains heavy-handed, this time set in the future (the year 2150) when the disparity of incomes between rich and poor have grown even more sharply than we experience today. The wealthy few live in an idyllic space station and the rest live in squalor on what remains of planet earth, exploited and hopeless.

Both themes that Blomkamp has chosen to explore in these two films are important. When we see those different from ourselves as alien, and when wealth removes accountability from the process of gaining those riches, the very meaning of human dignity is called into question. What’s needed, it seems to me, however, is a subtler story line if the impact of the film is to awaken the conscience of those who subconsciously have chosen to pursue personal peace and affluence as primary concerns in life. Elysium is exciting, and the visuals are again striking (the surgery scene worth the price of renting the film), but it comes off as an action film rather than a story that makes us think. And there are two technical aspects that were irritating. First is the (over) use of a handheld camera. I realize this technique of filming draws the viewer into the action, but it can also be unsettling, almost disorienting when used too much. It is unsettling here. And second, I understand the need in the story for the fight scenes and do not dispute that. However, the film takes great effort to make us see how very human and ill the Damon character is, but then has him fight as if he were an undefeatable hero in a Marvel comic. I suppose the point was to stress the importance of his struggle, but the lack of reality in the sequence made it merely implausible.

Filmmakers need to tackle this theme, because it is as real as apartheid was, and racism is today, and just as deadly. As long ago as the 7th century BC the Hebrew prophet Habakkuk issued a warning that if wealth is gained at the expense of others, an accounting will someday occur.

Woe to him who builds his realm by unjust gain
to set his nest on high,
to escape the clutches of ruin!
You have plotted the ruin of many peoples,
shaming your own house and forfeiting your life.
The stones of the wall will cry out,
and the beams of the woodwork will echo it (Habakkuk 2:9-11)

Sounds like the plot of a science fiction film, doesn’t it?