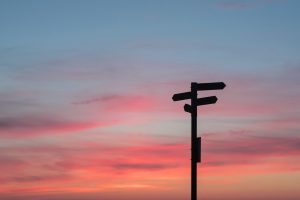 Choice—unbounded autonomous, subjective sovereign individual choice—is the playboy king of consumerland, and with comfort and convenience as his closest courtiers and cronies, he now rules much of life. Authority and obedience are therefore banished together. They are the unwelcome spoilsports whose entry might ruin the fantasy game of infinite choices. The result is no surprise—a grave crisis of authority within the church, and a rash of positions and interpretations that in any clearer thinking generation would be frankly seen as the rejection of the authority of Jesus and the Scriptures that they are.

Evangelicals are especially vulnerable to this distortion of choice because of the exaggerated place they give to choice in the call to conversion. It may even be their Achilles’ heel. Whereas the Jews are the chosen people, so that their faith is their destiny, Evangelicals are a choosing people, and their faith is often merely their decision. The step of faith is of course a choice, the most important and fully responsible choice a person ever makes. But when the overwhelming emphasis is put on choice as an act of decision, choosing becomes everything, but it can then suffer the fate of many modern choices and shrink to being lightweight, changeable and nonbinding. Choice and change are close companions, and those who decide for a faith because they choose to believe it can as easily defect from the faith when they choose not to.

Contrast this modern casualness with the early church’s deep theology surrounding conversion and especially the costly stress on the public witness of the sacrament of baptism. This was a direct and deliberate counterpoint to the Roman practice of sacrament. For the Romans, the sacramentum was far more serious than a normal oath in a law court. It was the solemn vow by which a person gave his or her word before an authority and put his or her life in forfeit as a guarantee of what had been sworn. Those who had given their sacramentum were then sacer. They were “given to the gods” if they violated the vow. They had given their sacred bond and they were no longer their own. For example, the sacramentum was the oath of allegiance sworn by Roman soldiers to the emperor as they joined the legions and by gladiators as they went out to fight and die.

For Christians, then, baptism was no casual choice. It was a public vow, a decisive break with the past and a solemn binding oath of allegiance to Jesus, sworn to God and before God—and before their fellow believers and the watching world. This was probably one reason why there were so many deathbed baptisms, such as the Emperor Constantine’s (“I am now numbered among the people of God… I shall now set out for myself rules of life which befit God”). People did not wish to die unforgiven, but neither did they wish to commit themselves any earlier than they needed to live under a vow (sacramentum) that was so costly and so binding. Choice today can always be casual, whereas the covenantal vow of faith is costly because we commit ourselves to Jesus and mortgage our very selves as we do so. We have chosen, and we are committed. We have picked up our crosses, and there is no turning back. We are no longer our own.

Source: This excerpt is from Impossible People: Christian Courage and the Struggle for the Soul of Civilization by Os Guinness (Downers Grove, IL: InterVarsity Press; 2016) pp. 70-71