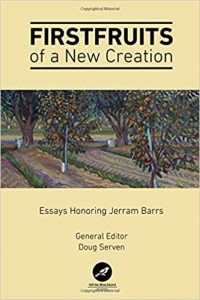 “Tears as a spark of fire”
an excerpt from “Apologetic Communication” by Zack Eswine
in Firstfruits of a New Creation: Essays Honoring Jerram Barrs

The first “sermon” I heard Jerram Barrs “preach” was in an apologetics class. It was this apologist’s way of being, as much as what he said, that broke through to my young and judgmental heart. Jerram was telling students about two of his neighbors. One was the victim of murder; the other was the perpetrator. Jerram began to read Psalm 10:

He sits in ambush in the villages;
in hiding places he murders the innocent.
His eyes stealthily watch for the helpless…
The helpless are crushed, sink down,
and fall by his might…
Arise, O lord;
O God, lift up your hand;
forget not the afflicted.

At this moment, Jerram’s voice faltered. He looked out above his glasses but away from us. Her searched the wall with his eyes and heaved a deep breath. He could read no further. Then he looked down, pulled off his glasses, and set them on the lectern. He pulled both hands up and spread them flat upon his face, covering his cheeks, forehead, and eyes.

All of us paused. Everything stopped. I think back now, and words from poet Sylvia Plath come to mind: “I could feel the tears brimming and sloshing in me like water in a glass that is unsteady and too full.”

Without warning, the glass could no longer hold. It was as if Jerram’s head and torso collapsed into a heap and pounded down hard into the lectern. His shoulders shook amid the rubble. Then his voice found its breath. The waters splashed over.

I look back and realize Jerram must have been near the age I am now. In his mid-forties, Jerram cried like a man as if none of us were there. I’m not sure I had ever seen a grown man cry like this. But there it was.

The biblical text and love for God and neighbor had led the apologist to weep. Reread that last sentence if you don’t mind. Class was in session. The sermon thundered. As a minister-in-training, all semester, I learned a great deal about the -isms and idols that create barriers to the Gospel in our hearts and in our culture. I learned what an apologist is meant to say. But that day, I was introduced to who an apologist is meant to be.

Jerram’s mentor was Francis Schaeffer, and many have suggested that the most crucial legacy of Schaeffer as an apologist is his tears. “L’Abri taught a person how to cry in light of our fragmentation with God, with each other, and ourselves.” I see now that Jerram was living what he had learned, teaching what had been taught. The love which drove the tears was like a baton and he was holding it out for us.

These tears were neither fraudulent nor sentimental. This apologist’s “drops of tears turned to sparks of fire.” The weeping bore a tenacious message. Love is “the mark of the Christian.”

I took note. I still remember. With others, I’m holding out my hand to Jerram’s baton, seeking to take hold and pass it on.

What if apologetics addresses our sorrows and not just our skepticism? What if doubt and faith, our questions and objections, arise not only because we sin, but also because of the wretched ways in which we are, all of us, sinned against? After all, it was Jesus’ defense of hope against death that included tears. “See how he loved,” the mourners said of Jesus when he wept (John 11:35-36). Jesus taught that love is how they will know you are Christians (John 13:35).

If the goal of Christian apologetics “is to defend and commend the truthfulness of Christian belief,” an apologist’s way of being with other people is itself part of what defends and commends the Christian faith.