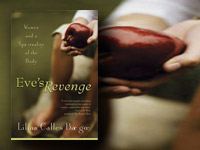 The issue of the place of women in society and the church will not go away. The way one works out their understanding of the unique place of women is a critical concern for Christians of the 21st century (regardless of whether one believes the Bible teaches women are restricted from certain roles or can function in any role). What is a balanced, Biblical perspective for women who have grown up through an educational system impacted by feminism and a media satiated by eroticism? Enter Lilian Calles Barger.

The purpose of Barger’s book Eve’s Revenge is not to (directly) engage the question of a women’s role in the church. Rather, it is to discuss the place of women in a culture that defines people by superficial criterion and presents answers that do not satisfy. She addresses these concerns primarily through a discussion of the body and spirituality.

Barger has written for the thinking non-Christian and Christian alike. This is not a self-help book presenting simple solutions to complex issues. Rather, in a style not unlike the author of Ecclesiastes, she addresses primary concerns of women, creatively addressing these issues from a biblical/theological perspective without sounding preachy or using worn, simplistic evangelical language. For non-Christians, she explains that an authentic look at the Jesus of the Bible provides the only satisfying alternative to other cultural options. For Christians, she demonstrates how they have been profoundly molded by the world around them. In presenting such a thoughtful critique, she addresses concerns of women and men alike.

In response to cultural assumptions, the author suggests that “subversive acts of resistance” be taken against cultural dictates that are “strong enough both to tame the mythical beauty beast and to thwart the dysfunctional relationship we have with our bodies” (p. 24). What are these subversive acts she suggests? At least four stand out in her analysis.

First, Barger believes that women must live life as organic rather than as distinctly public or private. Our society separates the public and private. It values the public sphere most highly, devaluing anything that is not measurable, economically profitable or quantifiable. Human emotion and vulnerability have been marginalized to the private sphere. What is needed, Barger explains, “is for those in the public sphere to embrace the difference and particularity of the private sphere and to recognize that there is no ‘natural’ division between private and public” (p. 68).

A result of this separation is that women have either been relegated to the private sphere or given up who they are as women in order to fit a public world that has been set up to serve men. In response, Barger’s second subversive act is for women to understand that they are created in God’s image and are integrated in a soul-body unity instead of accepting a socially constructed perspective. This act requires the rejection of two cultural icons: beauty and strength. The icon of beauty, representing the marginalization of women as body-objects, results in an assault on the female body through practices such as cosmetic surgery and excessive dieting. The icon of strength, requiring women to abandon their gender difference and embrace sameness with men, results in activities such as “contraceptive abuse, abortion, rejecting male sexual correspondence, or engaging in an obscuring of the female body through androgyny, which allow us to become, in a sense, invisible as women and able to navigate the male-defined public world with less notice” (p. 25).

The third subversive act is for women to understand that it is futile to view their bodies as a source of ultimate identity. Such identity can only be found in a spirituality that is at peace with their embodiment through a restored relationship with their Creator and with others. Every chapter of the book, while analyzing cultural concerns, leads back to spiritual implications: emptiness, lack of fulfillment and satisfaction, and a longing for meaning within one’s body. At the same time, Barger does not promote the isolated, individualized Christianity so pervasive in our time. Rather, she demands that faith must be lived out in significant relationship with others in community.

The fourth subversive act that Barger identifies is that, while women can be mothers or potential mothers, this is not all they can be. Women can be true followers and agents of God’s Word. She explains that “God makes a plurality in humanity by creating women as a ‘suitable helper.’ This ‘helper’ was no errand girl. The English word helper is from the Hebrew ezer which means to be one equal to the task. It is used for God Almighty in Scripture (see Ps. 115:9-11).” In her development of this theme the author critiques two societal extremes: the Roman Catholic veneration of Mary (Mariology) and feminism. Mariology, she says, has reinforced a reduction of women into passive motherhood, denying their contribution in other areas of life (p. 148). And feminism, she states, presents only economic and social solutions that “leave our soul empty or deny our body” (p. 25).

By moving beyond the triteness of so much evangelical jargon, Barger provides a modern model of what Paul did at the Areopagus. She has done her homework and understands the perspectives of our culture. In this, she affirms what is good and then provides thoughtful Biblical critique. There are some interpretive comments made that I would question. But these do not diminish the message of the author. As mentioned above, she doesn’t offer easy answers, but rather points to a significantly different (and biblical) way of viewing and living life.

While Barger’s book does not specifically address the church, she does affirm that woman have significant contributions to make beyond motherhood (while, at the same time affirming that God-given role). This presents an important challenge, particularly to churches and persons who believe the Bible teaches some types of role differentiation (including this author), to grapple with ways woman should serve as equal partners in the work of God’s kingdom.

1. Review Barger’s four subversive acts and consider how your view of women has been molded by secular and Christian culture rather than Scripture.

2. Women who are coming to Christ out of a secular background struggle with the traditional roles expected for them in most churches. What steps can the church take to authentically address these concerns within the parameters of Scripture?

3. Many women feel that their voice is not heard in the decision-making contexts of their church. How could the interests of women be promoted in the church?

4. How could the church more effectively encourage women to utilize their gifts for the “building up of the body of Christ” (Eph. 4:12)?