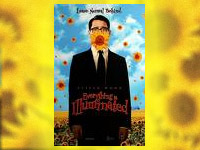 Everything Is Illuminated is based on the novel of the same name by Jonathan Safran Foer. The film tells of the author’s search for his grandfather’s past. Jonathan (Elijah Wood) is a quiet man who spends his time collecting rare and odd bits of his family’s history. On her deathbed Jonathan’s grandmother gives him a photo of his deceased grandfather who is standing in a field with an unknown women. Jonathan’s grandmother tells him that if it were not for the women in the picture his grandfather would have never escaped the Nazi’s who overran the Ukraine during WWII. She then dies, leaving the women’s identity a mystery to Jonathan.

Jonathan decides to head to the Ukraine to see if he can find the mystery woman from the photo and to see if he can learn anything about his grandfather’s history and his own heritage. Once he arrives in Odessa , Jonathan is joined by two members of the Perchov family. Alex (played by Eugene Hutz, lead singer of the Gogol Bordello) is Jonathan’s reluctant, and only partially competent translator. Alex’s grandfather acts as Jonathan’s driver and guide despite the fact that this older gentleman is convinced he’s blind. The last member of the group is Sammy Davis Jr. Jr., grandfather’s seeing-eye…dog.

Everything Is Illuminated is a beautiful film which traverses the range of human emotion. The cinematography is breathtaking and filled with rich and meaningful color. The film’s soundtrack and musical score are well fitted to the story line and make you feel as if you are traveling the Ukranian countryside. The story is both simple and multilayered and what begins as a straightforward, almost boring trip turns into a search for belonging, connectedness and identity.