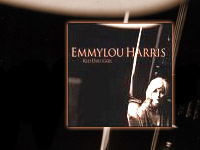 If there’s no heaven, what is this hunger for?”
Red Dirt Girl

Age and the Gospel have something in common: realism. Illusions evaporate. Like a mirage in the desert or the dew at dawn, both disappear. Reality is designed this way. T.S. Eliot observed, “No one can stand too much reality.” It’s true. We prefer diversion and our illusions. In the end, however, these modes of escape will catch up with us. Life will win out—and death. Our worldviews will be put under pressure and our levels of commitment put to the test. It was said of Jesus that he was “a man of sorrows and familiar with suffering” (Isaiah 53:3). Life sobers one up. Post-September 11, this is a fact for more and more people.

Few artists capture this aspect of truth more poignantly than 55-year-old country singer Emmylou Harris. Her thirty-year career spans my adult life and captures the quiet sadness of a life entering its autumn years. This is adult music. This is music for those who listen to NPR and identify with the world of Garrison Keillor. This is music for the person who can feel the mournful nostalgia of Henry Wadsworth Longfellow’s lines from “A Fire of Driftwood:”

We spake of many a vanished scene,
Of what we once had thought and said,
Of what had been, and might have been
And who was changed, and who was dead

Many will not understand this language of loss, remorse, regret—and, yes, hope. Harris’ music portrays a tragic view of life.

Gordon MacDonald calls these wounded ones “broken-world people.” My wife, Kathryn, says she doesn’t trust anyone unless they walk with a limp. Most people have a limp. Few talk about them. Sadly, even fewer will allow themselves to feel its pain. Most prefer the romantic illusions of Disneyfied pop artists to the gritty realism of Emmylou. “She’s a downer.” “Pass the Prozac and turn on the TV.”

This is music for those who have known loss: a divorce, a prodigal child, the death of a parent, the betrayal of friends, the collapse of a career, or the pain of chronic disease. “I’m entrenched in middle age, and I’ve endured some dramatic losses. I don’t have answers, but I do have questions. I guess that’s why I like the two Annie’s so much… Annie Dillard and Annie Proux.” In another interview she explains, “They say you are what you eat. Well, you are also what you live through… Music helps us get through those bleak times, not by telling us that everything is all right, or going to be all right, but by acknowledging the suffering that is pretty much usual fare for everyone.”

Emmylou Harris has largely been known as an interpreter of songs—a musical stylist. Her bittersweet, haunting voice can capture the deepest human dimension in any song. She makes us believe in the power of music to touch the heart. She told The Irish Times, “I’m drawn to the sad songs. They’re the most evocative, they’re the ones that unlock that pool of emotion within us.” In addition, she has had a long career, beginning with Gram Parsons, of singing harmony on other artists’ records—some 283 tracks at last count. Her award-winning career has recently been featured in Warner’s release of “Anthology: The Warner/ Reprise Years,” (Rhino, 2001). The 45-song double-CD features 23 top ten country singles (six of which reached #1 on the country charts).

But more important as an assessment of a mature artist is her thirty-first album, Red Dirt Girl (Nonesuch, 2000). This was the first studio-mixed album since 1995 and the first album in which Harris wrote the majority of the songs. It won a Grammy for Best Contemporary Folk Album. It also demonstrates that Emmylou is more than a country singer. Distancing herself from the likes of Shania Twain and Reba McEntire, she told Newsweek, “What I was doing has nothing to do with the white-bread appeal of country radio music.” Her music blends folk country and blues cri de coeur with a gentle touch of southern Gospel. Red Dirt Girl has been compared to both Bob Dylan’s Blood on the Tracks and U2’s The Joshua Tree. Backup singers on the album include Patty Griffin, Julie Miller, Patti Scialfa, Bruce Springsteen, and Dave Matthews. Aging sixties folk rockers who began their careers with Dylan in the bars of Greenwich Village and Jersey, take a hard look back on life and its losses.

There is behind the lament of her music a longing for home. The child of a decorated Marine aviator, she lived the life of a military vagabond. She was born in Birmingham, Alabama, and was raised in Woodbridge, Virginia. She admits to being rootless. “I had no roots or real identity… [So] I adopted country music,” she explained to Newsweek. The lead song on Red Dirt Girl, “The Pearl,” explores the pain of an oyster with a grain of sand that eventually becomes a pearl. There is pain in Harris’ world, but there are also pearls. The “whats” are not without their “whys.” There are no simple answers or preachy clichés, but hope is not totally absent.

So there’ll be no guiding light for you and me
We are not sailors lost out on the sea
We were always headed toward eternity
Hoping for a glimpse of Galilee
Like falling stars from the universe, we are hurled
Down through the long loneliness of the world
Until we behold the pain become the pearl

Harris understands that human longing points beyond itself. The answers to life are not found within oneself, but beyond. As Blaise Pascal observed, “We are full of things that impel us outwards. Our instinct makes us feel that our happiness must be sought outside ourselves… Thus it is not good philosophers telling us: Withdraw into yourselves and there you will find your good. We do not believe them, and those who do believe them are the most empty and silly of all.” Harris, the good philosopher, knows better.

We are aging soldiers in an ancient war
Seeking out some half-remembered shore
We drink our fill and still we thirst for more
Asking, “If there’s no heaven, what is this hunger for?”

What Harris offers is no cheap solution—sex, drugs, or alcohol or fame, fashion, or fortune. These dead ends are self-evident. Like C.S. Lewis, she knows we are far too easily pleased. “What does not satisfy when we find it, was not the thing we were desiring.” The fool blames circumstances. The disillusioned repress the pain and deny the reality. It is the Christian who recognizes that we are not born with desires unless satisfaction for these desires really exists. Just as thirst implies water, so too our deepest hunger points toward heaven.

Does suffering have meaning? Does pain lead to pearls? Does longing suggest a resolution? Both the questions and the longing point in the right direction. Emmylou Harris writes music for those who have lived long enough to know that the questions are just as important as the answers.