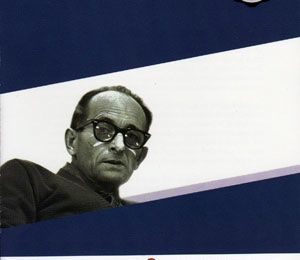 In neither case do we want to believe that these men were ordinary. Normal people, after all, don’t get asked by major publishers to write memoirs, as Rusesabagina did. And the New Yorker doesn’t send reporters overseas to report on the trials of run-of-the-mill criminals. But Rusesabagina tells us several times that he isn’t a special person; he says he did only what he had to do in an unusual moment. If we could talk to his first wife, we might hear something of his faults. And one assumes that the unknowing customers he picked up as a taxi driver in Belgium after the genocide didn’t detect in him anything particularly heroic.

The same is probably true of the Argentine laborers who worked alongside Eichmann through the 1950s, unaware that their workmate, who had fled to South America after the war, had overseen the transportation of Jews to Nazi Germany’s killing centers. The philosopher-journalist Hannah Arendt tells us that Eichmann was nothing more than a boring, banal, thoughtless careerist. In a different place and time, he might have ended up as a middle manager, tending to emails, meetings, and office gossip.

In both cases, the important thing was practice. Rusesabagina had long practice as the manager of the Hotel Milles Collines, a luxurious place for Rwanda’s elite and up-scale visitors. He had risen to his position as a result of hard work, which meant tending to clients’ needs. He became highly skilled at figuring out how to makes people’s stays pleasant. In the process he developed habits. He tells us that when the genocide erupted he had little time to think things through. “Over and over people kept telling me that what I did…was heroic, but I never saw it that way…. I was a hotel manager doing his job.”

But what did it mean to be a successful hotel manager? It meant the cultivation of empathy. It meant the ability to puts another’s momentary desires (I need more towels) ahead of one’s own (I’ve had a long day and want to go home). It meant taking responsibility on one’s own shoulders. During the genocide, Rusesabagina rejected murderous demands from his political superiors because he felt responsible for the people who had fled to his hotel. In his guests’ interests, he employed righteous deception.

Eichmann, on the other hand, never disobeyed orders, and he presented himself as a man of honor because he had always gone along with his superiors’ wishes, even when he personally found them unpleasant. Eichmann had no personal hatred for Jews, but his government called for their murder and he was a government man hustling his way up the career chain—so there you go.

Eichmann was not stupid, Arendt tells us. “It was sheer thoughtlessness—something by no means identical with stupidity—that predisposed him to become one of the greatest criminals of [the war] period.” Eichmann was not demonic, he was shallow. Considering the hollow man before her at the trial in Jerusalem in 1962, Arendt reflected on the “strange interdependence of thoughtlessness and evil.”

There is much to say about both of these books, but the discussions my class will have on them will lead to reflection on the nexus between thoughtlessness and evil and thoughtfulness and good. Of course, the Gospels have a lot to say on this theme. “You fool!” God says to a thoughtless landowner. “This very night your life will be demanded from you. Then who will get what you have prepared for yourself?” (Luke 12:20)

In a day when keeping student-customers happy is a keen goal, it would be tempting to leave the class conversation at the safe level of philosophical abstraction. But we won’t. Instead we will focus, laser-like, on the fact that Rusesabagina and Eichmann did what they did in the big moments because of what they had made of themselves in the small moments. Eichmann did what he did because, in the decades before, he had made decisions that made him into the kind of person who could do that. The same is true of Rusesabagina.

The same is true of you and me.

People say they would never obey orders that would put innocent people’s lives at risk, but they have no problem with texting behind the wheel. They deceive themselves by saying that they know texting while driving is dangerous, but since they know it’s dangerous they’ll be extra careful and thus, for them, it’s not dangerous! That’s called self-deception, and little good can come from putting energy into lying to ourselves, and then putting more energy into believing the lies we have told. Little good can come from it, but the obesity epidemic, the pervasive and predictable rudeness associated with communications technology, and the appalling violence against women of prime time fare point, at the least, to a society immersed in thoughtlessness. What are the consequences of these trends, and to what will they lead?

People know that big decisions matter and assume that, when the decisions come around, they will get them right. Sometimes, yes; sometimes, no—consult the divorce rate. Rusesabagina and Arendt suggest that success in the big things depends on learning from previous moral mistakes and general success in life’s little demands. They provide us with illustrations of a basic biblical idea: “He who is faithful in a very little thing is faithful also in much; and he who is unrighteous in a very little thing is unrighteous also in much” (Luke 16:10).

Eichmann was not a monster, Arendt says; he was “a clown.” He had a “horrible gift for consoling himself with clichés.”

A key difference between Eichmann and Rusesabagina was that the latter really understood that his decisions didn’t only affect himself. He was able to imagine how his decisions might affect others. He understood that his private life had public significance. He had been able to enunciate “words directed against the darkness” in a moment of extremity because he had made the habit of doing so in moments of relative ease.

Eichmann in Jerusalem: A Report on the Banality of Evil by Hannah Arendt (New York, NY: Penguin; 1963) 336 pages.