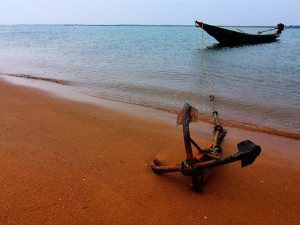 Why does the health care system continue to fail millions? Why have poverty rates remained the same for thirty years? Why do problems like drug addiction, education reform, and world-record murder and incarceration rates remain resistant to resolution?

Citizens and policy makers across the political spectrum recognize these social ills. Policy experts regularly propose plausible solutions. Health care, education, and prison reformers come and go with their suggested reforms. All are convinced of the rationality of their proposals for a more just and decent system, with considerable agreement across the spectrum. Yet very little changes. Why?

Cultural Anchors Defined
Have you ever tried to sail a boat without hoisting the anchor? Or perhaps had the more familiar experience of starting a car and trying to drive it without releasing the parking brake? “Cultural anchors” refers to the way certain attitudes, beliefs, and values place a crippling drag on social change. These anchors are so deep as to be invisible or so self-evident as to be unquestioned.

The idea of cultural anchors helps explain the resistance of entrenched problems to transformation. In the policy world, dysfunctional health care, poverty and inequality, and poorly performing schools are entrenched problems because they perpetuate injustice, they have complex social and economic causes, and they have proven resistant to multiple efforts at change over many decades.

Cultural anchors go beyond policy disagreements about facts, theories, or practicalities. They hold back actual engagement with real injuries. For example, during the time when slavery was widely accepted, opponents could not gain a foothold to challenge it because beliefs, fears, and assumptions about racial superiority were unquestioned in society, preventing movement in the direction of justice and the common good. Until those beliefs changed, slavery remained a widespread, accepted practice.

Cultural anchors are not necessarily all evil. Humans are culture-creating animals. We cannot live without anchors. One would be ill advised to drive a car without brakes, but it is almost as dangerous to apply the brakes in the wrong situations or to drive without knowing that the parking brake is engaged. It is not these anchors’ existence that is troublesome, but rather their harmful effects. Until we recognize our contemporary anchors and lift them, poverty and inequality, broken health care, high rates of incarceration, and other social injustices will remain impervious to change.

Four Anchors
If we understand cultural anchors to be those deep-seated beliefs, assumptions, loyalties, commitments, and fears that permeate a cultural group, we can discern four such anchors in US culture and society:

In many ways, this rights culture is a good thing. It is the bedrock of freedom, including religious freedom. It is the foundation of respect for human dignity, and it contributed to the abolition of slavery and of women’s second-class status. Yet rights claims are also the foundation for a culture of individual self-assertion, and more significantly, the erosion of civic life and neglect of social justice and the common good.

Individual rights assume an absoluteness contrary to the Gospel. They assert the self as the sole master of land, property, and body. I can say what I want and do what I want so long as I don’t infringe on your similar rights. This is a recipe for alienation, separation, and mutually exclusive rights claims. If something basic is named a right, then everyone else must leave me alone to enjoy it. Or, if my right is somehow not satisfied, then someone else has an obligation to furnish what I need. Yet that obligation infringes on someone else’s rights, and the result is a zero-sum clash of rights, a game of see-saw where if one person is up, another must be down.

Two immediate consequences follow. First, this zero-sum game undermines trust in government and in the possibility of public justice. Government is perceived as a tool to advance the rights and freedoms of whoever controls it. Public justice is impossible because justice is defined as my rights being protected. Second, the “pursuit of happiness” degenerates into Epicureanism. I have the right to happiness; thus, if my marriage is not a happy one, I should have the unfettered right to leave it behind. Individual rights to happiness, not the social good of family, define contemporary marriage. Epicureanism creates a culture of “me” and “my space,” as well as a lack of discipline, self-sacrifice, and social vision. Social life is “hollowed out” from within, ii where niche news, class segregated churches, and lifestyle enclaves replace civic life.

II. Economism
Economism is the pervasive impulse to extend the model of free market competition from economic relationships to all social relationships. College students become customers who have contracts with professors. Physicians become health care “providers,” and their patients are customers to be satisfied. Churches compete for congregants by creating coffee bars, sports teams, and entertaining worship services.

The widespread acceptance of the market model exacerbates social problems and leads to consumerism. “More” and “bigger” govern economic life. GDP must grow, therefore, cars, homes, and the borrowing to afford them must grow. Pervasive income and wealth inequality are another consequence. Because winners and losers are a natural function of economic markets, the thinking goes, they must be a natural function of health, class, educational, and other “markets.” Under economism, inequality is not simply a social and economic fact; it becomes a pervasive belief system with a set of assumptions and commitments so deeply embedded in the cultural psyche that our eyes are blind to its harms.

III. American Exceptionalism
This is the deep-seated cultural belief that our nation has been especially chosen and blessed by God for a unique, even religious, mission to the world. One paradoxical benefit of our era’s angry partisanship is calling attention to this often-buried cultural assumption. “Manifest Destiny” or America as the “last, best hope of humankind” are features of this belief, but it is a heretical one from the perspective of orthodox Christianity.

Nevertheless, this belief pervades all layers of American culture, with deleterious consequences. One is fear of the other and the idea that something or someone can be “un-American.” This manifests in a cultural, not just economic, fear of immigrants, and in the belief that they will somehow undermine American culture. Or the fear shown in some recent campaign slogans that “we need to take back our country,” as if some elected office holders are an alien species. We see harmful effects of American exceptionalism as well in the refusal of policy makers to learn from other nations—whether in crime policy, health care policy, or education. If we’re exceptional and “chosen,” what then can unexceptional and unchosen nations offer?

IV. The Idea of Progress
Americans cling to the idea of infinite progress, a belief linked to the prior ones outlined here. Because of our individual freedom, the economic incentives of the free market economy, and American exceptionalism, we believe that there is no problem so large that America cannot solve it once it puts its mind to it.

The upsides of this commitment are space exploration, medical device innovation, and smart technologies. The downsides, however, include the denial of death, fascination with medical technology despite its very high cost and diminishing returns, and the refusal of any limits in material consumption, military power, or life itself. John Updike says that for Americans, there is no concept of “enough.” In a recent book, physician Atul Gawande describes the American nursing home as the “consequence of a society that faces the final phase of the human life cycle by trying not to think about it.”

Christian Practice and Lifting the Anchors
Cultural anchors are by definition deeply embedded, and it is no surprise to find them within the church as well as in the larger culture. Lifting these anchors requires first seeing them in our own life and language. The church has within Scripture and its traditions powerful tools to lift these anchors and bring about profound transformation. Three are especially important: self-examination, prophetic resistance, and alternative institutions.

Self-Examination
Authentic Christianity finds its center in Christ, not culture, and our loyalties derive from older and deeper sources such as Scripture, traditions, and practices. Spiritual traditions and practices furnish the opportunity to detach from the ways in which the surrounding culture has infiltrated the church. Self-examination sees in the rich traditions of faith alternatives to the myths and images and commitments of the dominant culture.

For example, when it comes to exceptionalism, St. Augustine reminds us that we are aliens and pilgrims in this time and place. Our true home is elsewhere, and temporal loyalties are secondary. Catholic social teaching and neo-Kuyperian thought offer theological and conceptual language such as solidarity, justice, sphere sovereignty, and human dignity by which to resist the dominance of individual rights language. We can develop analogies other than “see-saw” and winner-take-all to shape our attitude toward economic life.

Prophetic Resistance
Self-examination helps us resist the attempts to sink cultural anchors into the church. We can refuse to use the language of economism in our preaching and teaching; we can refuse let the flag define our loyalties. Abolition of slavery, child labor, and denial of women’s right to vote depended in part upon the church’s refusal to take these evils for granted, as well as its work to end them.

Having examined itself, the church can resist the pull of the dominant culture and transform its own conscience. It can adopt a prophetic stance towards the culture and its practices. This is not to say that the church should be the arbiter of public life (and thus violating sphere sovereignty.) Rather, the church has a public, prophetic role in decrying cultural beliefs and practices that violate solidarity, public justice, and the common good.

The challenge for these institutions is to resist the tendency towards “institutional isomorphism,” where they become transformed by the culture instead of transforming the larger culture. Thus, Catholic hospitals over time come to look very much like any other hospital. Evangelical social service institutions begin to adopt the rights-based, economist language of “deserving and undeserving” poor, instead of the Christian vision of each and every person as an image of God, no matter their past or present choices.

At their best, these institutions can be the loci of alternative practices and resistance to the prevailing culture. They can powerfully demonstrate how it is not only necessary, but also possible, to lift anchors impeding transformation toward public justice.

Self-examination, prophetic resistance, and alternative institutions—not an easy formula, but a vital one for doing public justice.

1. Where do you see the four “anchors” in your own life and in the life of your congregation?

2. Do you agree that cultural anchors described above are major obstacles to public justice?

3. Which beliefs and practices are most potent to resist the anchors described in this article?

This article first appeared in the May 25, 2015 issue of Capital Commentary (http://capitalcommentary.org/exceptionalism/driving-brakes-why-doing-justice-so-difficult). Capital Commentary is a weekly current-affairs publication of the Center for Public Justice. Published since 1996, it is written to encourage the pursuit of justice. Commentaries do not necessarily represent an official position of the Center for Public Justice but are intended to help advance discussion.
We highly recommend the work of the Center for Public Justice and urge you to subscribe to Capital Commentary online at the Center’s web site (www.capitalcommentary.org).
I. I owe the concept of “cultural anchors” to the late Jack Glaser, a long-serving theologian and ethicist with St. Joseph Health in Irvine, California.
II. I owe this insight to Drew Christiansen, S.J., writing in America magazine (11/1/10).