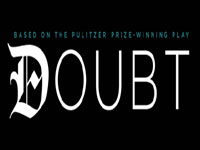 Nothing is so firmly believed as what we least know. –Montaigne

How do you feel about people who are certain? Do you find them attractive, admirable, encouraging? Or do you tend to suspect their character, their motives? How you answer the question may depend more on who you know than what you believe. Often the attractiveness of certainty depends on who embodies it.

In the opening scenes of his play-turned-film, Doubt writer/director John Patrick Shanley shows us two very different faces of certainty. Sister Aloysius Beauvier (Meryl Streep) is the very model of a fifties era conservative. “Every easy choice today will have its consequence tomorrow, mark my words,” she tells us and we almost believe her. Doubt takes place in 1964, shortly after John Kennedy declared “all encompassing, explosive change” to be “the motif of our time.” One imagines Sister Aloysius voted for Nixon. Ironically she is also a strong woman in an era in which strong women simply weren’t welcome. As the principal of The St. Nicholas Church School, she is lord of the fief, quick to make sure her underlings know it.

At first glance Father Brendan Flynn (Philip Seymour Hoffman) is Kennedy to Sister Aloysius’ Nixon. He’s young, progressive, easier to warm up to than the elderly nun, an agent of the change she hates. He uses a ballpoint pen; Sister Aloysius is wedded in principle to fountain pens only. She’s “Ave Maria,” he’s “Frosty, the Snowman.” She’s the Council of Trent, he’s Vatican II.

If you don’t like movies driven by dialogue, you’ll hate Doubt. It was made for the stage, not the screen, and its conversations are what are important, especially early conversations between Sister Aloysius and Sister James. In these dialogues the elder works the younger like a good attorney working a frightened witness, producing in her first insecurity, then suspicion, specifically the fear that Father Flynn is guilty of sexually abusing Donald Miller.

Why does Sister Aloysius suspect Father Flynn? We’re never quite sure, but a few things become quite clear during the film. One is that she has no evidence to support her charges, to which she answers “But I have my certainty!” Another is that she resents the male-centered authority structure of the church. When Father Flynn attempts to bully her into silence—“You have no right to act on your own! You have taken vows, obedience being one! You answer to us! You have no right to step outside the church!”—she is not cowed: “I will step outside the church if that’s what needs to be done, till the door should shut behind me! I will do what needs to be done, though I’m damned to Hell! You should understand that, or you will mistake me.”

Lastly, and most important of all, we are given no definitive answer to the question of Father Flynn’s guilt or innocence. But what if Sister Aloysius is right?

What the point of this parable is has been the subject of many discussions with friends. Some see it as a post-mortem on the scandals that have rocked the Roman church during the last decade, others as a post-modern fable of gender and power. John Patrick Shanley himself says it’s a story of “the invasion of Iraq and the utter certainty that my government had about the weapons of mass destruction being there; and it turning out that they weren’t; and how they dealt with that change in reality.”

In his essay “In Defense of Certainty,” Charles Krauthammer noted, “Doubt is in. Certainty is out.” He concluded, “The campaign against certainty is merely the philosophical veneer for an attempt to politically marginalize and intellectually disenfranchise believers,” i.e., our culture has soured on certainty because of an anti-religion bias. I agree with his analysis as far as it goes, but it doesn’t go far enough. Shanley’s film is the missing footnote to Krauthammer’s essay: without a doubt, how and why we are certain is almost as important as what we are certain of.

1. What were you thinking about as this film ended? 2. Did you like any of the characters in the film? If so, did your personal feelings for this character change in the course of the story? Why? 3. Did you identify with any character in the film? If so, with whom and why? If not, why not? 4. Father Flynn said, “The truth makes for a bad sermon. It tends to be confusing and have no clear conclusion.” What do you think he meant by this? Do you agree with him? 5. When Sister Aloysius shared her fears with Donald Miller’s mother, she defended her decision to keep him at St Nicholas despite those fears. Do you agree with her decision? Were you surprised by her defense of her decision? 6. Sister Aloysius remarked to Sister James, “In the pursuit of wrongdoing, one steps away from God.” What do you think she meant by this? Do you agree? 7. Do you think Father Flynn is guilty or innocent? Why? Would it surprise you to learn that many viewers of the film find it difficult to answer this question? 8. In the last scene of the film Sister Aloysius suddenly sobbed and told Sister James, “I have such doubts!” Why do you think she did this? Were you surprised by it? 9. Doubt writer/director John Patrick Shanley recently said, “We are living in an age of extreme advocacy, of confrontation, of judgment and verdict. Discussion has given way to debate. Communication has become a contest of wills. Public talking has become obnoxious and insincere. Why? It’s because deep down under the chatter, we have come to a place where we don’t know anything. But nobody’s willing to say that.” Discuss this quote. 10. What is doubt? The Scriptures (e.g. James 1:5-8) condemn doubt, but encourage questions. How are doubts different from questions?