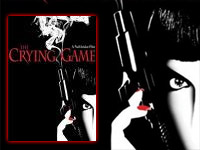 Neil Jordan’s The Crying Game has become a social phenomenon. Starting off in art houses in major metropolitan areas, it broke all box office records. Through a superb blend of social statement and political thriller, interest in the film spread primarily because of a shocking “secret” the plot contains, causing it to move finally into the major mainline movie theaters. Subsequently, it was nominated for nine academy awards, and its cast and director have become celebrities. If you have not seen the film and want to experience its surprising plot twists, do not read the rest of this review.

The film is set in Northern Ireland and London, and begins with the capture of a black English soldier by a group of IRA terrorists. One of the terrorists befriends the soldier, finding out about his girlfriend in London in the process. As events develop, the terrorist flees Northern Ireland and goes to London where he begins a relationship with the soldier’s girlfriend. The film then explores their relationship in the context of the terrorist being pursued by his former colleagues.

It sounds like a simple story, and the movie could have been merely a tight and interesting thriller with simply this much content. But essential to its plot is a twist that catapults this political thriller into the realm of social statement. The girlfriend, as it turns out, is not a girl at all, but a transvestite. Fergus, the Irish terrorist played by Steven Rea, may be a radical in his politics, but he is traditional in his social mores, and the tension that develops as he and the transvestite establish a friendship and seek to thwart the IRA’s revenge against Fergus becomes the driving force in the film.

The clearest element of “message” in the film—and the one most abhorrent to those who believe our culture is slowly being tortured to death by a widespread breakdown of standards by which anything can be judged as right or wrong, or even “normal” or “abnormal”—is that we must go beyond traditional ways of viewing sexual relationships and accept homosexuality and transvestitism as normal. In fact, the more traditional relationship of man to woman is rarely portrayed in the film, and when it is, it is portrayed exclusively in an evil light. At the beginning of the film, for example, the English soldier is seduced by an IRA agent posing as a tramp; and later Fergus has a tenuous, shallow relationship with the same woman. These are the only two heterosexual relationships in the film. Everything else is man to man, or, as it were, man to woman/man.

Homosexuality has been an element in many films since the sexual revolution of the sixties, but the role it has played has been minimal. Increasingly, however, movies like Paris is Burning, the semidocumentary about gay balls for crossdressers in Paris, have loudly preached the “victimization” of homosexuals, and the glory of their lifestyle. Not surprisingly this brings the praise of Hollywood critics but failure at the box office. The Crying Game distinguishes itself from these other films in several ways. First, its homosexuals are “real” people with whose loneliness, hurts and fears anyone can sympathize. Dil misses his soldier/lover and yearns for Fergus’s love, yet earns the audience’s respect as a loyal, funny friend to Fergus when love turns out not to be an option.

Second, Neil Jordan enjoys tweaking the audience in the film, and this lightheartedness on such a serious subject also contributes to the successful acceptance of the film by the viewer. For instance, the film opens with a long shot of a carnival in Northern Ireland which is playing over its loud speakers the song by Percy Sledge, “When a Man Loves a Woman.” In case one might think this is not ironic, the movie closes with a humorous dialogue between Dil and Fergus in prison, fading out to the sound of Tammy Wynette’s “Stand By Your Man.” By using romantic classics from two of the most antigay subcultures in the western world—African American and country western music—Jordan plays with his audience, saying, in essence “I know you’re not going to like some of the things in this film, but I can laugh at homosexuality, too, so give the film’s ideas a chance.”

Thirdly, The Crying Game does not preach the glory of homosexuality, touting it as the lifestyle. The straight character, Fergus, has no conversion experience and remains repulsed by the thought of a sexual relationship with Dil throughout the film. This lends the film a reality that has caused it to be much more appealing to large audiences than many other gay films. Mix all this in with a nailbiting terrorist drama, and you have a formula for successful movie making.

If it were not for the social climate today, The Crying Game would never have been nominated for the Oscar for best picture, but it is, nevertheless, a well acted, superbly produced movie. The screenplay is a triumph of clarity, especially since the film’s plot is so complicated. Jordan has succeeded because he does not overcomplicate it with subplots or minor characters. The film basically revolves around three or four people, and they are easy to keep clear in one’s mind, even given the change of scenery and a time lapse of many months as the plot unfolds.

It is possible that someday The Crying Game could well be seen as something of a watershed in American social consciousness. Gays still consider themselves ostracized from the mainstream of American life, but this film, with its sympathetic portrayal of that lifestyle, could end up being one cultural event that was a significant step in changing that.