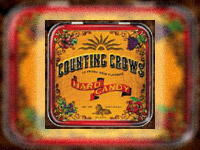 And it’s a dangerous time for a heart on a wire
Shuttled from station to station noisily
Not knowing why
“Goodnight L.A.”

The alternative rock group, Counting Crows, has been around. For nearly a decade, this Bay-area inspired band has been making music about the bittersweet randomness of life. Their name stems from the English verse that suggests that one’s fate can be determined by the number of crows seen together: “one for sorrow, two for joy” and so on for health, wealth, marriage, birth, and life.

Counting Crows explore the world of meaning and relationships from the vantage point of sleepless nights and mornings after. Repeated often enough—the regrets of failed relationships, casual sex, and alcohol- and drug-induced hangovers—no longer become the exception, but the rule. Lead singer and songwriter, Adam Duritz, has made the morning after a metaphysical truism. It’s the way things are. There is in their latest album, Hard Candy, a resigned acceptance of heartache. “It’s too late for all those things that are going to make you feel good for a moment, whether it’s getting high or stepping off the end of the world or calling a girl in the middle of the night or staring at photographs. It doesn’t mean you don’t wish it would work,” Duritz explains. Breaking up is not only hard to do, it is inevitable.

Hard Candy is the band’s fourth album and clearly one of their best. Duritz, taking advice from Paul McCartney of the Beatles, has blended his provocative lyrics with melodic alternative rock. The talent of the group’s musical style as well as Duritz’s reflections on life is self-evident. It is an album worth owning for the emotions it evokes and the musings it provokes. Both, however, are very sad.

A number of reviewers have suggested casual listeners start with “Carriage.” In many ways it is a song that succinctly describes the relational world Duritz and many of his fans inhabit—a world where impermanence is the norm and heartbreak an expectation.

The story behind the song is autobiographical, tracing back to his days as an undergraduate English major at Berkeley. “This song,” he explains on C.C.’s website (www.countingcrows.com), “is about how you go from being the most important person in someone’s life one day to being utterly meaningless on another day… I tried to write about the perils of actually caring for other people, because they come and they go, and that leaves you with yet another new hole.”

He was living with this girl and then they broke up. Sometime later he had a one night stand with his ex-girlfriend, and from that sexual encounter she got pregnant.

With evident mixed emotions, Duritz and the unnamed girl decided to keep the baby even though they were split up, but the girl miscarried and the child was lost. Captured in this very real and intimate portrait of a modern relationship are all the emotions of relief, guilt, confusion, and loss.

All that is left from “actually feeling” is a broken relationship and a dead baby. It’s hard candy —a sweet memory turned hard. On “Black and Blue,” Duritz sings of a girl contemplating suicide and then lying down next to her lover.

Cut yourself until you bleed
But fall asleep next to me

Her suicide note reads: “I’m sorry everyone. I’m tired of feeling nothing. Goodbye.” Feeling or not feeling, both lead to death.

This is a cruel, sad world Duritz describes. The best he can offer is the existentialist grit of just carrying on. “Wash your face. Dry your eyes.” There are no answers —one just moves on to other relationships and other towns.

The longing for love and human connection gets reduced on this album to the autoeroticism of phone sex, “Why Should You Come When I Call?”

It’s 1:30 in the morning but that’s alright by me
Weren’t you just waiting by the phone?
I should give you a little warning
But I need the things I need
I’m not proud to need a hand; but I don’t
Understand…

Hard Candy is not the sugarcoated romanticism of “Friends” —fornication with a laugh track. (Adam Duritz has been romantically connected to both Courtney Cox and Jennifer Aniston in the past.) No, this is real life when lived outside the boundaries of God’s intentions for shalom. The longings for love don’t cease, but as the holes in the soul get larger and more frequent, hope is surely lost.

So, as I began, Counting Crows has been around. Life has not been kind. And from what is revealed on this album, they are no wiser for the pain.

One is left with nostalgia for a fleeting memory of a photograph buried in a desk drawer, of a Miami sunset, of a chance seduction, of a mother’s love, but the morning’s harsh light reveals “it’s just the same hard candy you’re remembering again.” The morning after is all that there is.

We can cluck our tongues and wag our fingers at the immorality of modern relationships. But as Augustine wisely noted, “Sin becomes the punishment of sin.” The modern troubadour songs of heartbreak should begin by breaking our hearts. It is love that is sought, not judgment. Will they find it in our hearts?