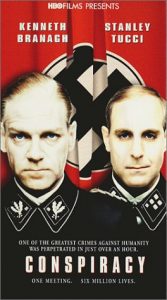 Once upon a time the face of evil was easily recognizable at least in the movies. It looked like Lee Marvin in The Man Who Shot Liberty Valance and Jack Palance in Shane. It wore a black hat and a leering expression that promised violence when angered. When I watched old westerns with my kids, they never had to ask, “Is he a good guy or a bad guy, Daddy?” They could tell just by looking.

Of course, evil has never been that easy to spot in the real world. Case in point: the Wannsee Conference in 1942. On January 20th, fifteen distinguished leaders from all parts of German life and society met at a lake home outside Berlin. They represented the army, the Ministry of Justice, the Foreign Office, the Ministry of the Interior, the government of several occupied territories, and, of course, the Nazi Party. There, over an elegant luncheon they planned the Final Solution, the systematic murder and disposal of some 11 million Jews.

Conspiracy (2001) is an HBO/BBC production in which director Frank Pierson attempts to reconstruct what happened at Wannsee. It was shot in the villa that housed the original conference. The problems considered and the solutions adopted there are as recorded in the only surviving copy of the minutes of the meeting. Only the dialogue is imagined, and it is fascinating.

The faces of the actors who recreate the conference are familiar to most movie goers. Emmy Award winner Kenneth Branagh (of Henry V) is SS Lt. General Reinhard Heydrich, Emmy Award winner Stanley Tucci (of The Devil Wears Prada) plays SS Obersturmbannfuhrer Adolph Eichmann, and Oscar winner Colin Firth (of The King’s Speech) is lawyer Wilhelm Stuckart. We know these men, we like them, we trust them and the characters they play, which makes their about face in this film all the more chilling and effective.

Imagine actually seeing their faces at Wannsee, listening to the debate while not understanding German. What might you think they were discussing? The war effort, certainly, and perhaps the countless problems associated with providing for soldiers—guns, ammunition, etc.—as well as the civilian population—food, medicine, health care. Just looking at them one might even have assumed they were talking business or family matters—but genocide? Never! For in the real world, unlike the old movies, evil rarely if ever looks the part.

And now imagine your shock when you learn this was what they actually said:

Tucci as Eichmann: Now, last summer Reichsfuhrer Himmler asked me to visit a camp up in Upper Silesia, called Auschwitz, which is very well isolated, and close to significant rail access. And we are turning that camp into a major center, solid structures, and here’s where your Jewish labor comes into play, Herr Neumann: the Jews haul the bricks and they build the buildings themselves. And when the structures are complete, we expect to be able to process 2500… an hour. Not a day, an hour.

Firth as Stuckart: …you’re shallow, ignorant and naive about the Jews. Your line and what the party rants on about, how inferior they are, some sub-species, and I keep saying how wrong that is! They are sublimely clever. And they are intelligent as well. My indictment to that race is stronger and heavier because they’re real, not your uneducated ideology. They are arrogant, they are self-obsessed, they are calculating and reject the Christ and I will NOT have them pollute German blood!

Stuckart was a moderate voice at Wannsee, insisting that mass sterilization was a better option than extermination. Heydrich, founder of the SS, was described by Hitler as “the man with the iron heart.” Eichmann escaped Germany after the war, but was later captured by Israeli agents, tried in Jerusalem and found guilty of crimes against humanity. French philosopher Hannah Arendt was present at Eichmann’s trial, and in her book Eichmann in Jerusalem: A Report on the Banality of Evil she summed up the most horrifying aspect of Wannsee very well:

The trouble with Eichmann was precisely that so many were like him, and that the many were neither perverted nor sadistic, that they were, and still are, terribly and terrifyingly normal. From the viewpoint of our legal institutions and of our moral standards of judgment, this normality was much more terrifying than all the atrocities put together.

Now imagine yourself at Wannsee. From the start Heydrich sets the stage: we’re here to solve the Jewish problem. How might you respond? What objections might you offer? This plan might jam the courts with cases arguing about who is Jewish and who isn’t. It might undermine the war effort by discouraging the soldiers who would be a necessary part of the planned executions. And it certainly would be a logistical nightmare. Is it even possible to kill and dispose of so many? All are merely technical problems to which Eichmann and Heydrich offered technical solutions in the form of the death camps. But would you dare to raise moral objections?

At the Nuremberg trials after the Holocaust one German official after another offered the same defense: “I was only following orders. I feared for my life.” I feel the heavy weight of both these excuses, and I will not lightly dismiss them with self-serving promises of what I would have done had I been in their place, because I’ve never been in their place. But I will offer one last appeal to conscience.

In the New Testament epistle of James the evil man is described as one who looks at his face in a mirror, turns away, and forgets what he looks like. Evil, we seem to forget, can look very like us. It’s an apt description, I think, for evil by its nature tends to hide itself especially in our own hearts and failing to see it for what it is makes it all the more likely to flourish.

I heartily recommend Conspiracy to you.