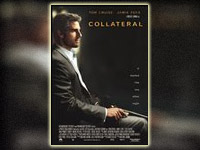 Collateral is a fast-paced action film but it is much more than that. Director Michael Mann (Ali, The Insider, Heat) has a penchant for developing truly human characters in his films. This penchant turns an ordinary action movie into an exploration of what happens when two worldviews collide and forces us to answer questions we would rather leave unasked.

Max (Jamie Foxx) is an ordinary guy living an ordinary, if not mundane life. He has spent the past twelve years driving a cab at night. He takes pride in being the best at what he does but he spends his time dreaming of bigger things and taking vacations in his mind. He’s waiting for the perfect moment to start a new life but one night in a cab with Vincent forces him to realize that moment may never come.

Vincent (Tom Cruise) is a killer for hire in L.A. for a few hours to get some work done. He hires an assuming Max to drive him around for the evening to take care of some “real estate deals.” When Max becomes wise to what’s really going on Vincent hijacks the cab and forces Max to drive him to the rest of his “appointments.” As the night unfolds the tension builds and we discover that this movie is more about the interactions between these two men than it is about dazzling and brutal action sequences.

Cruise delivers what is probably his best performance to date and Foxx shows the true star potential that came to be fully recognized in Ray. The film is rounded out by a superb supporting cast including Mark Ruffalo, Jada Pinkett Smith, and Peter Berg.