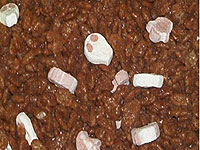 God in a bowl
When told that nature reveals the glory of God, Woody Allen replied that he only saw a giant restaurant. Fair enough. If someone can’t see God in the grandeur, try the granular. Rather than scraping the heavens, suggest that God can be found in a bowl of Cocoa Krispies.

Really. When I was 16, I ate seven bowls of Cocoa Krispies at summer camp one evening. If anyone had asked me why, the answer was simple. I wanted to. And that is exactly how God originally made us to live. Everyday in every way. I didn’t appreciate it then, but doing what we take pleasure in is a pointer toward God.

Psalm 115:3 says, “Our God is in the heavens; he does whatever pleases him.”1 At the core of God’s character is this central idea: he does whatever makes him happy. At the core of human character is this central idea: we’re made in God’s image.2 So we do whatever makes us happy. Right here, right now. All day, everyday. Psalm 115:16 says: “The highest heavens belong to the Lord, but the earth he has given to man.” Given our present limitations of finances, freedom and physical abilities, we do as we please. In the ancient “four-chapter” gospel, we’re designed this way. It’s Chapter One, creation.

Doing whatever we please spooks many Christians. Immanuel Kant (1724-1804) said if we do something for pleasure or enjoyment, the action becomes impure. Ayn Rand interpreted Kant to mean this: “An action is moral only if one has no desire to perform it, but performs it out of a sense of duty and derives no benefit from it of any sort, neither material nor spiritual.”3 Kant sounds pious, but he’s actually impractical. He denies the very way we act day in and day out.

“It is a Christian duty, as you know, for everyone to be as happy as he can,” wrote C. S. Lewis.4 Blaise Pascal (1623-1662) believed, “All men seek happiness without exception. They all aim at this goal however different the means they use to attain it. They will never make the smallest move but with this as its goal.”5 We do what we please because God does as he pleases. Those who stifle this core characteristic deny their humanness and holiness.

I’m walking us to the rim of the canyon so that we get a broader view. Too many well-meaning Christians subscribe to Kant and are fairly joyless souls. They remind me of H. L. Mencken’s critique of Puritanism: “the haunting fear that someone, somewhere, may be happy.” God made us to be happy. He made us to do what we want to do. Of course, we can drop over the edge. We have to remember, as Paul Harvey put it, the rest of the story.

If we’re designed to do as we please, our default follows the same path: we sin because we like it. Remember, Moses forsook the “passing pleasures of sin.”6 This is Chapter Two (the fall). Chapter Three (redemption) tells us what we can do: “Delight yourself in the Lord and he will give you the desires of your heart.”7 Martin Luther understood this verse to mean love God and do what you want to do. If we love the things God loves in the order that he loves them, we can pretty much do what our heart desires as long as we keep in mind: “Your word I have treasured in my heart that I may not sin against you.”8

It is the destiny of those who follow God to spend eternity indulging the desires of our hearts. This is Chapter Four, when we love what God loves and do what we want to do forever. “God will let everyone into heaven who, in his considered opinion, can stand it,” writes Dallas Willard.9

Woody Allen once asked God to give him some clear sign “like making a large deposit in my name at a Swiss bank.” While an extraordinary dollop of dollars might convince many that God exists, a better case can be made pointing to the ordinary decisions we make everyday. Like eating seven bowls of Cocoa Krispies at summer camp for the sheer pleasure of it. I wasn’t too far from the way God acts and made us to live. So the next time friends object to the evidence for God in nature, invite them out for breakfast instead and watch what they select. I’ll bet they’ll choose what they enjoy eating.

1. What was your first impression upon reading “Cocoa Krispies Christianity”? Why do you think your responded as you did?

2. As objectively as possible, identify every idea and/or statement in “Cocoa Krispies Christianity” that upon first reading it seemed new or questionable or wrong or something you’d have to think about for awhile.

4. Metzger says that “Doing whatever we please spooks many Christians.” Do you agree? Why do you think so many Christians find this idea threatening?

5. Metzger quotes C. S. Lewis saying, “It is a Christian duty, as you know, for everyone to be as happy as he can.” If you were told the quote and asked to name who said it, would you have guessed Lewis? Why or why not?

6. “We do what we please because God does as he pleases,” Metzger says. “Those who stifle this core characteristic deny their humanness and holiness.” Do you agree? Why or why not? If you disagree, what argument would you make against this claim? What biblical texts would you offer as evidence for your position?

7. Metzger quotes philosopher Dallas Willard as saying, “God will let everyone into heaven who, in his considered opinion, can stand it.” How does this change our view of heaven? What is Willard getting at? Does this make heaven more or less appealing?

8. “Too many well-meaning Christians,” Metzger says, “are fairly joyless souls.” Do you agree? Why or why not? Someone has commented that today’s evangelical churches seem to be divided into two basic, joyless groups: those which are solemn (quietly unhappy), and those which are entertained (noisily giddy). Do you think this is fair? What should true joy, true delight look like? How do you know?

9. Metzger suggest that “the next time friends object to the evidence for God in nature, invite them out for breakfast instead and watch what they select. I’ll bet they’ll choose what they enjoy eating... doing what we take pleasure in is a pointer toward God.” Do you think non-Christians will find this evidence for God convincing? Why or why not?

11. How should this exercise change your life?

12. Write a letter to Critique’s editor in response to Metzger’s piece.