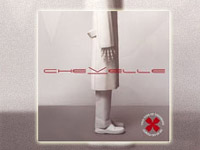 On their third full-length EP Peter, Samuel and Joseph (the three brothers who form Chevelle) deliver an aggressive powerhouse of an album. Chevelle’s third album follows in the footsteps of the surprising success of their 2002 release Wonder What’s Next which was their first album with Epic records. Their first album Point #1 was put out by the small Christian label Squint records and was plagued by poor mixing and production. 2002’s Wonder did not suffer from the same production and mixing issues and ended up surprising critics and fans alike when it landed three radio singles and garnered them enough respect in the mainstream Rock/Metal scene to earn them the bragging rights of playing mainstage on the Ozzfest tour.

The music of Chevelle is unapologetically simple and straight forward: hard, driving beats geared up with explosive guitar riffs and the haunting voice and scream of brother Pete. Lyrically, This Type of Thinking is cryptic and enigmatic but, as is noted in the bio on their webpage, Pete communicates more in the way he sings his words than by the words he sings. While not quite a concept album there is a definite similarity and uniformity between the music and words of these 11 songs. Within these songs lies a deep mourning and angry lashing out at the commercialization and plastic nature of Western civilization. In many regards this album is a call to social revolution against those who would homogenize and commodify art and human existence. While it is unfortunate that the guys in Chevelle merely point out the problem without suggesting many solutions we can support their disapproval with so much of what is wrong with our culture and hope that in future albums they may point to a right response to these same problems. Besides that this is just a great album to rock out to.

“The Clincher”
1. In some ways the lyrics to this song seem to be describing death. Do you think this is literal or metaphorical? Why?

2. We usually speak of the soul leaving the body, why do you think the song says that the body has left the soul? Is this significant? Why or why not?

3. Who do you think this song is being sung to?

5. Why does he scream, “Now saturate the earth”?

2. What do you think is meant by the phrase, “touching new life”? How does this phrase guide the song?

3. What do you think the idea he tried is? Why try it for no reason? Why is it “still existing”?

4. What does the singer want to get some of? Why?

“Vitamin R (Leading Us Along)”
1. What’s your initial impression of this song? Is it different in any way than the two previous songs?

3. Why does he want and need the fear? Where does the fear come from?

4. Who is “he”? Who are “they”? How does your answer to these two questions affect how you interpret this song?

5. What does he mean by the statement “create a world, a special place of my design”? How does this fit with the next line, “to never cope or never care”? Have you ever done this? Why?

6. What or who is he afraid of becoming a slave to? How does this fit with the theme of being led along?

“Still Running”
1. What are your thoughts on the opening “disclaimer”? Could you understand any of it?

3. What does he want and need done?

4. What is the lie that’s being checked to see if it’s met expectations so far?

“Breach Birth”
1. What do you think of the title of this song? Do you find it abrasive or offensive?

2. Why? Why do you think they chose this title for this song?

3. What are the schematics for?

4. Who or what do you think is being forced into molds? What kind of statement are they making here? What do you think about the question, “Dare we live without molds?” What’s your answer to this question?

6. What do you think about the line, “Awaken a world our own”?

7. What are your thoughts about the musical composition of this song? Is it fitting or not? Why?

8. What do you think about the call to “Be brave, reshape, create, reclaim”? Does this line up with a Christian worldview? If so how? What does the songwriter want you to take away from these words?

“Panic Prone”
1. This is one of the slowest songs on the album. Why do you think they chose to have a slower tempo for at least part of this song?

4. What seems to be the moral dilemma in these lyrics? Can we know or are the words too cryptic? Are there any clues?

“Another Know It All”
1. Who is so dull that they have to borrow their hate? What kind of person does this line bring to mind?

3. What do you think the wounds are that are mentioned in this song? Why?

4. What are your thoughts as to what the chorus means? How does it fit with the rest of the song?

“Tug-O-War”
1. What do you think they are suggesting you should “get in line” for? Why?

2. Why does the singer scream he word rape in this song? What do you think he is referring to?

3. What are your thoughts on the line, “The reason never outweighs the truth”? What do you think is meant by this statement? What kind of worldview does this hint at? Where do you agree and disagree with this type of worldview? Why?

4. Who do you think they are referring to when they mention the “Liar’s club”? Why?

5. What do you think about the line, “Ignorance is in blissful reach”? Why is it included in this song? What are they trying to tell their hearers with this statement?

6. Should we pay heed to this message? Why or why not?

7. What are they getting at by mentioning the loss of inspiration? Whose inspiration are they talking about?

“To Return”
1. What are your thoughts on the musical progression of this song from the beginning to the end? Is it appropriate? Why or why not?

2. What do you think is meant when they refer to “the Cold”? Why?

3. What do you think is meant by the line, “to touch the trees no one has known”? Why?

5. How would you describe the tone, mood and feeling of this song? Why?

2. What do you think about the following lines:
Can’t let the teachers lay waste Of a new mind Prevent emotional drought And watch the pace quicken
What is the statement being made in these lines? Do you agree with the sentiment being expressed here? Why or why not?

5. What do you think about the “One more man” statements? What is their purpose in the song? Are they effective? Why or why not?

“Bend the Bracket”
1. What are your thoughts on the music of this song compared to the music on the rest of the album? What are the differences and similarities? What mood does this music express?

3. What do you think is meant by the line, “we bend the bracket”? What is the bracket? What does it mean to bend it?

4. What are your thoughts on the line, “So boredom captured another fool, shredding him to bits”? How does this relate to the statement that the war is on? What are your views on what boredom is? What are the roots of boredom? What is the cure for boredom?