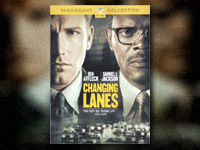 Hollywood is not exactly known for films that explore the difficulty modern man has with concepts like repentance or forgiveness. Changing Lanes is a stunning exception.

Lanes, the product of a collaboration between first time scriptwriter Chap Taylor and veteran Michael Tolkin (The Player, The Rapture), tells the story of two men, caught in the desperate situation of being late to court for hugely important, though hugely different, reasons, who have a minor accident that alters each of their lives forever. Gavin Banek (Ben Affleck) is a young, rich, white lawyer carrying important papers that will enable his superiors to profit from an unethical, if not illegal, action and he’s trying to get to court to file those papers. Doyle Gipson, played humbly, yet powerfully, by Samuel L. Jackson is an older, poor, black insurance salesman traveling to court for a final hearing on the custody of his two sons. The two men blame each other for their misfortunes and spend the rest of the day (importantly, Good Friday) playing out their anger in a series of punitive acts. The movie seems set up for a formulaic, tiresome mano-a-mano battle between these two with a hackneyed ending. Guess who, in Hollywood these days, would win?

Lanes gives us the battle we expect, but almost nothing else. From the moment of the car wreck, the movie takes twists and turns, usually relating to the consciences of the two main characters, that leave us baffled and questioning what will happen next. One of the two picks up the phone to call off the war and apologize just as a fax comes to the office, angering and setting him off again. Another time, one is addressing an envelope containing the papers that will let the other off the hook, just as he listens to a phone message that turns him once again into a revenge-seeking monster. Back and forth the story goes, building in intensity until the two do blatantly criminal, even life-threatening, acts to one another. The plot severely strains credulity in several places, but the viewer doesn’t care because its movements are so unexpected and deal with such serious moral questions that we don’t have time to notice continuity problems.

And that is only one of the movie’s strengths. Able and clear direction from Roger Michell (Notting Hill) enables Ben Affleck to give thus far the best performance of his career and Samuel L. Jackson to play the angry but conflicted Doyle with a subtlety and range that goes well beyond the talky script. All the supporting performances are magnificent, contributing to the film in the way minor characters are supposed to. Toni Collette, as Gavin’s mistress/associate and Amanda Peet, as his wife, note special mention, but William Hurt, Kim Staunton and Sydney Pollack are no less remarkable in their roles. The actors all supplement a script heavy on dialogue and a cinematography with little interesting from a visual standpoint with elegant facial work (the film is filled with close-ups and two shots). Jackson’s sad, hunched-over portrayal is a particularly virtuoso performance. He makes the middle-aged Gipson seem older than his years by physically portraying the effects of the character’s alcoholism and pent-up anger without seeming affected in any way.

The movie has formal weaknesses (particularly some poor editing, though the two-car wreck scenes are some of the best work ever), but form is not this movie’s championing element. Rarely does a Hollywood movie in scene after scene raise such complex moral questions; Changing Lanes is almost too full of them for the viewer to assimilate the ideas and sort them out without chaos resulting. Questions about ethical legal procedure, responsibility to one’s employers, the importance of doing what is right over what is expedient, provision for one’s children versus doing the neighborly thing, marital responsibility, resisting temptation—all these and more fill almost every scene. But chief among them is the question of pride and its effect on the human heart, especially when the pressure is on. Neither man is able to say “I am sorry” and forgive the other his sins, and this inability forms the moral center of the film, resulting in the mayhem that almost kills each of the main characters.

When the two finally do come to a resolution at the end of the film, their rapprochement carries a moral uplift that reverses the common, contentless, unbelievable Hollyood ending. The development of each character, especially that of Gipson, is well paced by Michell; the audience feels they have learned the futility of revenge by the time the two give up and reconcile.

The reconciliation, however, does have Hollywood-style consequences. We are supposed to believe that a single off-camera conversation changes a woman’s mind about staying with her husband when years of chaos and anger have made her take a hard line in custody proceedings just hours before. And an ambiguous dinner scene involving the blackmail of Gavin’s father-in-law and employer, and with him Gavin’s wife, purportedly forms the basis for a pro bono legal career in a sophisticated, Wall Street law firm. I’d like to see what that work place and marriage will look like in a few years, much less what Gavin will be like. If he comes out of this moral framework as a good man, then God really does live on Wall Street.

And perhaps most importantly, as in the movie reviewed last time in these pages, In the Bedroom, God is left out of the entire process. When Gavin, lost and seeking, drops into a Catholic church (remember: the action takes place entirely on Good Friday) for advice, the best the priest can muster as an answer to his dilemma is the Rogerian response, “Why does the world have to have meaning?” Gavin rightly throws up his hands as if to say, “If you don’t know the answer to that question, I don’t need to waste my time here anymore.” And if that is all the church does have to say, he is right.

No film in recent memory contains the variety and number of powerful discussion starters that Changing Lanes has. Though flawed, Lanes does not disappoint as a story that causes one to think, and think hard, about what we as a culture view as “repentance” and its consequences. It is a step in the right direction to present human forgiveness and reconciliation, and does so with power and grace.

1. Paintings play an important role in this film—as establishing shots, as background metaphors, as controlling images for a scene. Which use of a painting most affected you and why? What about the worldview represented in that painting, or perhaps by the painter, makes it a good one for use in the scene? 2. A technique called “slow ramping” (zooming in on a subject by increments rather than one, continuous lens activity) is used in the final scene. How does it contribute to what that scene means in the story? 3. As we have argued above, the formal power of this movie comes from its strong character development. Of the two main characters, which one was the most interesting to you? Why? 4. A major sub-theme of this movie is well-described by one of the main characters when he describes the world as a sewer. Do you see it this way? What do you mean by that? 5. Are these characters “real” to you? What makes them so? Focus on one scene and its dialogue to answer the question.