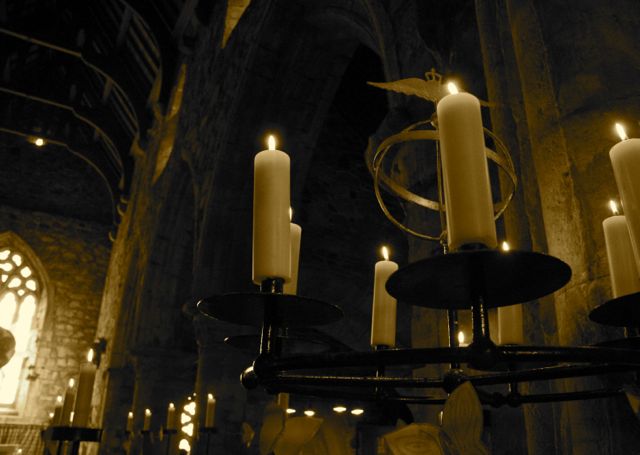 Click. A button was pressed on a lighter and a small flame appeared in the dark sanctuary. It was like a seed of light, its flame bright with the energy it contained. The wand of the lighter was dipped towards a man with a handheld candle and, magically, it flourished. He then, in turn, passed his flame to another individual with a handheld candle. These participants then transferred their flames to others and so on until, in time, it made its way to my wife and I in the back, the room blossoming with petals of light. The room was enchanted with hands half-aglow beneath floating white candles topped with raindrops of fire. Light was flowing around the room, rippling, soft and luminous, stirring shadows, drawing forms out of darkness… soon faces were discerned, gently flickering, and glistening eyes revealed, touched with fine points of fire.

There’s something about the use of candles during a church service, whether during a Christmas candlelight service or some other occasion, there’s just something wondrous about them, especially when glowing in a darkened room. I’m convinced that one of the reasons God created fire involves its ability to enchant, its unique capacity to provoke wonder. There’s something inexplicable about fire. I mean, what is it? Scientists can give us some information, but there is, at least, some measure of mystery here.

Growing up, my identical twin brother and I were fascinated by fire, probably inordinately so. Once, on a sunny day when we were just boys, we started a dry field on fire. Immediately we were excited by our deed, intoxicated by the power and beauty of it, the honey-yellow flames, curling of smoke and crinkling of its burning bringing delight to our mischievous souls. These emotions proved fleeting however, giving way to fear as other spots in the field began to catch fire. Soon it was out of control, patches blooming, here and there, before us. Frantically, we tried to stamp them out and when we failed, ran away. For some reason we turned back and after battling the flames for some time managed to stamp them all out. If I recall correctly, this little incident was not communicated to Mom and Dad. I’m still fascinated by fire, and this memory along with the more recent one of the candles kindled during that special Christmas candlelight service remind me of this fact.

I’m sure some important symbols were used surrounding the candles in the service, but I’m afraid either my memory fails me regarding what pattern of symbolism was expressed and its meaning, or I just wasn’t paying enough attention to this aspect of the service. Having said that, I offer some symbols associated with the use of candles in the cool, yet warm dark of that room, including the obvious illustration of luminous Christians in a dark, fallen world. Another image involves candle flames as a portrait of the church, for when we come together, unified, we burn stronger and more brightly than when apart, the candle smoke like the incense of our worship rising as a sweet offering before the throne of our Lord. This last image reminds us that a candle isolated from the church, left alone in the world, can easily go out, snuffed by the buffeting of the smothering dark. The single flame of a candle also reminds us of the cross when Christ—the Light of the world—bore the immense burden of our sins on his back, alone, fighting against the fierce powers of darkness.

A candle flame in a dark room also tends to draw our gaze down to its tiny, radiating flame of light, its presence swallowing up a sense of the vastness of space as if all eternity, the great weight of it stood hushed, gazing, peering down like on that timeless day when the convergence of the temporal and the infinite, time and eternity, deity and physicality was revealed, and a beautiful Baby—the Savior of the world—was born.