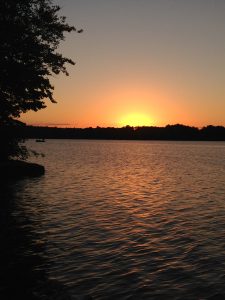 Although I’m dedicating this letter to Katy B. who has begun a dangerous journey, please come along, all of you, for none of us knows at what point ours will end. Let’s all pray we arrive slathered with God’s lavish grace.

Two Guys who ran and won
I recently learned that a writer I respect and love died last month from brain cancer. In 2014, he published a book of prayers you need to get – A Book of Uncommon Prayers: 100 Celebrations of the Miracle and Muddle of the Ordinary by Brian Doyle. I always look for his essays in a lit magazine I get, but it has been about a year since anything appeared. Now I see why.

I’m hoping he has knocked into my friend Ed Hague whom I think he would like a lot because they are two of a kind. Both were mortally wounded by cancer and yet found their way to a New and Unending life. They are both funny, real, and dish out piercing insights on life. They are probably creating some mayhem up there.

Doyle’s book included The Last Prayer. It had to be either uncannily prophetic or possibly one he wrote after his diagnosis?

Dear Coherent Mercy:
Thanks. Best life ever. Personally I never thought a cool woman would come close to understanding me, let alone understanding me but liking me anyway, but that happened! And You and I both remember that doctor in Boston saying polite but businesslike that we would not have children but then came three children fast and furious! And no man ever had better friends, and no man ever had a happier childhood and wilder brothers and a sweeter sister, and I was that rare guy who not only loved but liked his parents and loved sitting and drinking tea and listening to them! And You let me write some books that weren’t half bad, and I got to have a career that actually no kidding helped some kids wake up to their best selves, and no one ever laughed more at the ocean of hilarious things in this world, or gaped more in astonishment at the wealth of miracles everywhere every moment. I could complain a little right here about the long years of back pain and the occasional awful heartbreak, but Lord, those things were infinitesimal against the slather of gifts You gave mere me, a muddle of a man, so often selfish and small. But no man was ever more grateful for Your profligate generosity, and here at the very end, here in my last lines, I close my eyes and weep with joy that I was alive, and blessed beyond measure, and might well be headed back home to the incomprehensible Love from which I came, mewling, many years ago. But hey, listen, can I ask one last favor? If I am sent back for another life, can I meet my lovely bride again? In whatever form? Could we be hawks, or otters maybe? And can we have the same kids again if possible? And if I get one friend again, can I have my buddy Pete? He was a huge guy in this life – make him the biggest otter ever, and I’ll know him right away okay? Thanks Boss. Thanks from the bottom of my heart. See You soon. Remember – otters. Otters rule. And so: amen.

I was also looking at some of Ed Hague’s final messages and include a few on the last page of this Letter. One of his was also a prayer. I don’t know if he wrote it himself or found it somewhere. He’d just gone into hospice and was only going to live a few more days.

People like Brian and Ed have become part of the “great cloud of witnesses” that keep me determined to make it to the end. It’s not just that they ran the race well but their lives included everyday thankfulness and joy mixed with the suffering and mess of life, including the unexpected and the hilarious. They make me slap my cheek: MARGIE! Pick up your stupid feet and keep walking. (Need. Holy Spirit help, of course.)

Heartbreak Trouble
I sit in my comfortable chair. A mug of coffee beside me. My slippers are lamb’s wool and leather. A fan softly cools the warming air. Bird song is so loud it’s audible through closed windows. The Bible is propped open just so. I’m reading John. It is the third day after Jesus died and Mary is sobbing. Heartbroken because he is gone. Disappeared. No one knows where.

Mary had reached that point in life, the day when it looks as if all you’ve hoped for – all the good you’ve imagined has turned to ash. Most of us have experienced such a day or even years. I only know a couple people whose lives are golden. I’m nonplussed and wonder if I should help them by arranging a bit of trouble. Really, how are they going to cope on the day their roof caves in if they’ve had no practice? So, most of us understand Mary because we have joined her at one time or another in weeping because of some one or something we’ve lost.

The world is pretty ugly with loss these days. Babies gassed in Syria. Coptic churches bombed. Immigrants trapped and baked to death in a closed semi truck in San Antonio. You don’t need CNN video clips to break your heart when a two year old washes up on shore. The trouble we witness is ages old. Sadly, nothing new.

Even closer to my heart: a friend’s prostate cancer has been up-ticked to stage four. Another dear friend, mother of two young ones, suddenly learns an aggressive breast cancer is attacking both sides and gobbling lymph nodes. Yesterday she was fine. Denis’ mother sobs every day for her dead husband. She can’t remember where he’s gone or how he abused her. She just wants him back. Speaking of pain, my right wrist is about as useless as a club. Good thing I’m left-handed.

Our home needs a new roof; if insurance doesn’t cover it, we have no money to fix it.

One week’s worth of troubles. Some devastating, some not so big, but enough to give us pause and wonder is Jesus with us? Is he nearby?

I’m still in my chair finishing a cup of cold pressed Java Estate Taman Dadar described as soft, smooth, dusty, chocolate, low acidity. Good grief. Some part of me thinks shouldn’t you be ashamed of yourself? Is it because your personal suffering is so small it allows you to calmly rock and drink as you watch the sky flame apricot?

NO Accusations today
I hush myself. No recriminations allowed today. My face drinks the rising sun because as I read on, in the next moment Jesus finds Mary on that day of grief and the whole universe goes viral with joy. He is risen! With every cell of my being, I believe Jesus will find all his dears – no matter how far our ashes scatter or how deeply our bodies are buried in the Earth’s rubble. With quiet anticipation I know something powerful is building on earth, in the galaxy, the universe, and one day this Savior, this Lamb we know as Jesus, will turn feral and fierce.

Isn’t it a little ironic that the tender lover St. John who above told us about Mary getting found by Jesus and who later wrote the book of Revelation with the eye of one who actually saw the future and knows that for all the suffering that exists there is a terrible recompense coming, an unstoppable fury – a time when the Christ of God will destroy all those who destroy the earth and his people? This hope of all things coming round to wellness can seem remote and my comprehension is faulty and slow. But where else can we turn other than to this Lamb? Like iron filings to a magnet my cells cling to him. They are all, every one of them, betting on Jesus. Pay off is coming!

That is what mortals misunderstand. They say of some temporal suffering, “No future bliss can make up for it” not knowing that Heaven, once attained, will work backwards and turn even that agony into a glory.   – C.S. Lewis, The Great Divorce

… And Finally,
Until he died in 2015, Ed Hague was a beloved member of Ransom’s Board.

These were some of Ed’s last messages to us as he ended treatment for prostate cancer:

Dr. Sartor: I think we’re done, Ed.
Ed: I agree.
Dr. Sartor: this seems important for me to say – I love you, Ed.
Ed: I love you too, Oliver. Thank you for fighting so hard for me.

And then to me:
Hospice coming tomorrow.

A couple days later this: I don’t know if it was a prayer or a poem he wrote or was he quoting someone else? I’ve added punctuation and breaks:

Hold fast dear friend,
Brother, comrade, pastor, shepherd, captain, who goes before us to cross this Last Sea of “sorrowful yet rejoicing,” compelled in the Spirit of Reepicheep to reach the end of the world, where all that is said, seen and fleshly slips away, and all that has been unseen and eternal rises like some great continent: Go ahead of us and find us a place at the great banquet table where one day together we shall raise our glasses of the sweet spiced wine of the Covenant, where our King has found it fit to write His promises upon our hearts and he has surely carved you in the palm of His hand.

A day later:
Started morphine an hour ago. Medic!!

Next day:
… based upon how I’m doing with my morphine dosage – Give me a call, and if I’m conscious I will pick up.

I sent this and from then on he was quiet:
Thou, who has showed me great and sore troubles shall quicken me again, and shall bring me up again from the depths of the earth. Thou shall increase my greatness and comfort me on every side. (Ps. 71:20,21) May you be soothed to sleep. G’night, Ed, my favorite druggie. Love mlh.

Not long after:
Hey, Margie, this is Betsy. Ed’s been unable to tend to correspondence this last week. I wanted you to know he took the dreaded turn for the worse yesterday afternoon. He’s been laboring ever since as he has slipped into unconsciousness. We anticipate his passing sometime tonight. These last 6 days have been extraordinarily rich and blessed. I know I can send you his deep love for you all. I look forward to seeing you soon.

These two and so many others make me thankful for those whose lives will ever shine so bright.