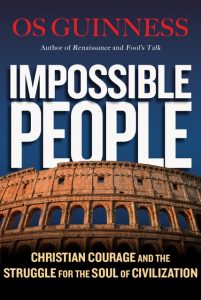 When the Lord freed the Israelites from slavery under the Pharaohs, he reminded them of the goal he had for them: “I will also walk among you and be your God, and you shall be My people… I broke the bars of your yoke and made you walk erect” (Leviticus 26:12-13). Free people stand up. They walk upright, and they kowtow to no one and to nothing. Free people have the courage of their own dignity and convictions. Free people know what is wrong and know how to say no to what is wrong. And no one more so than the impossible people whom God has freed to live and stand and walk free before him. Need we talk of Moses before the Pharaoh, of Phinehas at a time of Israelite corruption, of Daniel and his friends before the might of Babylon and Medo-Persia, or St. Peter and St. Stephen, or Athanasius, Peter Damian, Martin Luther, Thomas Cranmer, Dietrich Bonhoeffer, Dietrich von Hildebrand, Oscar Romero, Karol Wojtyla and countless others?

We all know that at times we are knocked down by life, and that one day we will all be leveled by death itself. But God keeps faith with us even when we lie in the dust, and because Jesus rose from death, we too will rise again. Marvelously, the Greek word for resurrection (anastasis) literally means “a standing up again.” So the impossible people gain their strength from an impossible God who is greater than all, who can be trusted in all situations and who strengthens his people to stand even against death. Despite everyone and despite everything, we are called to stand, and stand we must as God’s impossible people. However sweet the seduction, however popular and powerful the tide, however plausible the different gospel, however scornful or brutal the attacks, and however fearful the threats, impossible people stand, faithful only to Jesus, our Lord and our God. So may it be in our time.

This courage to be distinctively Christian and therefore to live differently must be restored to the heart of Christian faith, just as its equivalent has always been the hallmark of the Jews and the secret of their remarkable survival down the centuries and across the continents. At Mount Sinai, the Lord commanded his people that whatever land they were in, “You shall not worship their gods, nor serve them, nor do according to their deeds” (Exodus 23:24). Later, their own prophet Ezekiel reminded them sternly that when they desired to be like other nations, they were thinking of something that simply could not be. God would never allow it. ‘What comes into your mind will not come about, when you say: ‘We will be like the nations’” (Ezekiel 20:32). As the Jewish sages reminded their people, “The whole world was on one side, and they were on the other.” Christians stand with Jews in this calling. For Christians to be the same as everyone else is impossible. Impossible people are called to be different, and different they will be or they will not be Christian.

Excerpt from Impossible People: Christian Courage and the Struggle for the Soul of Civilization by Os Guinness (Downers Grove, IL: InterVarsity Press; 2016) p. 216-217.