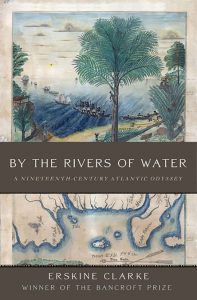 By the Rivers of Water is far and away the best missionary biography I have ever read. In fact, it is one of the best biographies of any sort I’ve read in the past several years. Set in the geographical heart of the international slave trade in Africa and America just prior to, during and immediately following the American Civil War, we see the power of the gospel to change lives and the power of racism to corrupt hearts and societies. Life is messy even when we have the best of intentions, and as By the Rivers of Water demonstrates, the messiness infests and perverts even those parts of life we wish were immune.

The author, Erskine Clarke is professor emeritus of American Religious History at Columbia Theological Seminary. This means he brings a believer’s understanding of theology, faith and the biblical call to missions to telling the story. Clarke couples this with a scholar’s insistence on careful research, accuracy and an admirable refusal to produce an adulatory and idealized hagiography. As a result, I not only read a truthful story; the story was able to probe into the hidden recesses of my heart to reveal the messiness I harbor there. “Clarke won the Bancroft Prize, the most prestigious of history awards, in 2006 for his Dwelling Place, a chronicle of three generations of slave-owning families in pre-Civil War Georgia,” notes The Dallas Morning News. “He deserves another Bancroft for By the Rivers of Water, a memorable book.”

Although there was a growing enthusiasm for Christian missions as the nineteenth century proceeded, many whites regarded the missionary effort as ridiculous, as an act of religious hubris. And in regard to Africa, many thought mission efforts doomed to failure. They asserted—especially as a new scientific racism began to develop in the nineteenth century—that Africans were unable to comprehend the Christian gospel or to adopt the “civilized ways” of Christian people.

Such nineteenth-century ideas, when added to the widespread distrust and often disdain of missionaries in our day, make it difficult to enter the Wilsons’ world and travel with them on their odyssey. The perceived presumption, and all to often, the obvious arrogance of missionaries—and indeed, of the mission movement itself—make the world of Leighton and Jane Wilson seem distant and uninviting. Yet, to begin to understand the stunning religious transformation of the twentieth and early twenty-first centuries, in particular the development of a truly global Christianity, requires we try to cross the distances that separate us from these early Protestant missionaries. We must try to peer as deeply as we can into their world with its commitments and sorrows, its adventures and failures, its travels and homecomings, and to listen as carefully as we can to their often surprising voices. [p. xx-xxi]

Clarke tells the story well, with prose that captures places, events and peoples as well as beliefs, dreams and disappointments so that the story comes alive in my imagination. Unlike many missionary biographies, he is careful to set the story in its wider cultural context so that we are brought into the very disparate societies involved, both in America and in Africa. We learn of the daily life not just of the missionaries but also of the people in their lives and among whom they lived, first in America before they left for the mission field, in West Africa where they served and then back in America after they returned home. As a result, By the Rivers of Water is a richly layered book but Clarke’s skill as a storyteller/historian keeps us from getting lost in the details.

The year is 1834. The modern missionary movement has begun. In November of that year, Leighton and Jane Wilson, from wealthy plantation families in South Carolina and Georgia, set sail for West Africa where they would work as missionaries for 17 years.

It was a courageous choice. Significant numbers of missionaries died of disease within their first year in Africa, many more were incapacitated, and the equatorial heat and humidity were unrelenting. New languages must be learned, new foods and patterns of life adopted, and new relationships developed. Still, the Wilson’s pioneering approaches to evangelism and education, and their energetic reporting to the church at home helped shape Protestant missionary efforts around the world. They established schools in numerous villages, and traded and shared meals with their African neighbors seeking to demonstrate the love the Christ, and as they became proficient in the native languages, to share the gospel. They also brought Western cultural values with them—including furniture, dishes and silverware—and found that the people living on the West African coast were already attracted to these trappings of “civilization” that the visiting trading ships and slavers had introduced. The Wilson’s did not fully enter the African’s world so much as invite the Africans into theirs.

Meanwhile, in America the tension between slave and free states was increasing. Many who hated slavery yet did not want free African Americans to be part of American society actively supported the creation of Liberia in West Africa where newly freed slaves could immigrate. Within a few years it became clear this misguided and ultimately racist effort at colonialization was doomed to failure, but initially even the Wilson’s hoped the experiment would work. Ironically, when they left for Africa the Wilsons owned slaves. They would have freed them before leaving, but southern states had passed draconian laws that made that choice legally difficult. So, as slave owners leaving southern plantations worked by slaves, they landed on the shore of West Africa where the horrific trade originated. Along the coast where they made their new home were fortresses where Portuguese, Dutch, French and Spanish ships—most of the ships built in America—landed to take on supplies and load their lower decks with “stunned, struggling cargo” for the long, often deadly trip to slave markets in the Americas.

After almost two decades in West Africa, ill health caused the Wilsons to return to New York, where Leighton worked tirelessly to encourage missions in American Protestant churches. Then when the Civil War broke out, they were drawn back to family and home in Georgia, one of the earliest states to join the Confederacy. Now well-known leaders in the new Southern Presbyterian Church, the Wilson’s continued to encourage missions and simultaneously helped with efforts in the southern church and society to make certain that as the saying went, free blacks “knew their place” in a dominant white society.

Clarke ends his tale noting that, after the Wilsons worked hard to develop indigenous churches in Africa, providence turned the tables on the church in an America where racism remains deeply embedded. As the heart of worldwide Christianity has shifted from America and the West to Africa and the global south, missionary efforts have switched direction. Now, in the heart of Georgia and South Carolina are Anglican churches under African bishops, as part of what they call their Mission in the Americas. “Perhaps Leighton would have wondered,” Clarke speculates, “if these new Christians were being called, in the words of the old missionary hymn, to deliver his beloved homeland and his long-reunited country ‘from error’s chain.’”

There is no triumphalism when Clarke recounts the Wilson’s successes, and there is a proper soberness when truthfully recounting their failures and sins. As I read, I realized that here was a historian who took Jesus’s words with consummate seriousness, that only those who are without sin should cast the first stone (John 8:7).

It is true the Wilson’s story ends tragically, for they settled into a pattern of cultural and ecclesiastical wickedness to which they were, sadly, blind. I am not from the American South, and so the temptations that assail me are different from that of Jane and Leighton Wilson. By the Rivers of Water did not make me feel superior, however, but instead made me aware that I too am a sinner who has known failure. So, as I finished the book I wondered before the Lord what sinful patterns of life and thinking, what wicked prejudices and worldly values shape my heart and behavior to which I too am blind. I do not want to be conformed to the world, but it turns out it is impossible to miss being shaped to some extent by our culture. We do not escape our social context when we are baptized—that will occur only at the return of the King.