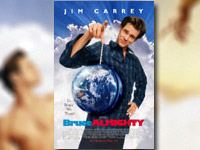 There are a few Jim Carrey movies that, if you put a gun to my head, I would admit to liking despite my greatest efforts not to. His over-the-top antics, amazingly pliable face, and physical comedy should be beneath this highly-educated, middle-class evangelical woman. But God finds ways to keep me humble. Laughing helplessly at Jim Carrey’s overacting is surely part of His arsenal.

I wasn’t planning to see Bruce Almighty, the latest Carrey film because the previews looked gimmicky and predictable (and remember how sophisticated I am). But a friend alerted me to an online interview with the director Tom Shadyac conducted by Christian movie reviewers and as I read his comments, I knew it was a movie I had to see. Bruce Almighty, it turns out, is about so much more than Carrey strutting around, lip-syncing, “I’ve got the power,” and making a woman’s skirt rise above her waist.

Nothing in Bruce’s life is going well. He’s a television reporter assigned to covering such things as the baking of the city’s largest cookie rather than the important news items he dreams of covering in prime time. His girlfriend (subtly named Grace) wants more commitment than he can give. He regularly gets stuck in traffic jams. His apartment, his job, his very life are all mediocre. And he blames God. If God were truly all powerful, Bruce reasons, it would take Him a split second to correct all these things that are going wrong. God hears Bruce’s grumbling and decides to put Bruce in charge of not only his own life, but the lives of all the people in his hometown. God’s reasoning: If you think my job is so easy, go for it.

As Bruce’s life is changed irrevocably, the movie explores a range of critical issues: unexpected encounters with God, the humbling experiences that often precede an admission of sin and the desire for redemption, learning to pray, reconciling with loved ones, and struggling with free will. Of course, with Carrey as a star and only ninety minutes to address these issues, they are not, needless to say, explored in any sort of theological depth.

Yet. It’s astounding that a mainstream movie would take on such heady—and distinctly Christian—themes. No wonder The Voice Behind, a Christian organization whose stated purpose is to encourage “goodness, truth, and beauty in and through art, entertainment, and media,” wanted to post Shadyac’s interview. The very first question —and I should know better than to be surprised—was: “Who made the decision to have Bruce and Grace cohabitating without marriage?”

As evidenced by this poorly phrased question, the movie has indeed received criticism from the Christian community because Bruce lives with his girlfriend and he swears, using the mother of all curses: the F word. Shadyac, in response to this, points out that Bruce, at the beginning of the movie, is immature. And unredeemed. Which is true. But it seems to me that Shadyac shouldn’t have to explain this. Especially to Christians. It should be self-evident to those of us who have needed redemption ourselves. Perhaps we need to be reminded of what we were like when God first reached out to us. We were not simply a little wayward. We were steeped in sin.

Just like Bruce. After God—played winningly by Morgan Freeman —bestows on Bruce godlike powers, one of Bruce’s first acts is to part a traffic jam with a simple flick of his wrists. A clearly ridiculous and appalling use of power. Out of vengeance and jealousy, he makes his co-worker, the evening news anchor, speak gibberish on the air. He tries to force his girlfriend to stay with him (coming face to face with the mystery of free will) despite his insufferable behavior. He goes for days without using his power to help a single person. It’s easy to judge him for his selfishness.

But I recognized myself in all the ways Bruce chooses to misuse his abilities. How many times do I catch myself praying that God will help me get to work on time or help my check get to the Visa company by Monday so I don’t have to pay a late fee? When God—the living God of Abraham, not the one played by Morgan Freeman—actually did offer godlike powers to a human being in the Old Testament, Solomon asked only for wisdom. I tremble to think what I would have requested (especially in light of the things I have consistently asked for over the years). And I don’t think I’m alone. When Bruce, overwhelmed by the number of prayers he receives, decides to simply say yes to everyone’s heart-felt requests, violence and rioting ensues because hundreds of people win the lottery and their individual winnings are laughably small. I’m sure there’s truth in the comedy: hundreds—who knows? maybe thousands—of people pray every day to win the lottery. I know for a fact that many prayers are uttered on Superbowl Sunday. We are selfish people who pray for ridiculous things.

Even after discussing prayer, redemption, and free will with Shadyac, the interviewers once again circled back to Bruce and Grace living together, feeling it was a major sticking point, especially for Christian parents. “It would have been nice,” one of them said, “if [Bruce and Grace] could have been dating. If it could have been more healthy. Because there is nothing in the film that casts that relationship as a mistake.”

Shadyac replied: “You know, I have been going to church since I was a babe. And I go to church today. And I think one of the challenges of our church, and churchgoers in general, is to accept humanity as it is. We have people in churches acting out, because they don’t accept the whole human being. They deny that we are sexual human beings. Or, that we can be angry. I, as a filmmaker, am not going to deny that. I am going to embrace that. I think it’s important to embrace the whole of humanity, and to say we are imperfect. By the standards of most Christians today you could not read your Bible. I mean, the Bible is chalk full of some pretty racy stuff, folks. There’s a lot, a lot, a lot of sexual impropriety. There is violence—all kinds of things. It’s not about a moment. It’s about the entire journey. If the Bible had not ended where it ended, it would be a pretty downer of a book. It ends with redemption. So, if you take one sentence out of the Bible, like with violence or sex, and you just focus on that sentence, you would not want to go near the Bible. But, if you look at the Bible as a whole, it’s redemptive and beautiful and it’s God’s love story to mankind.”

Criticizing a movie for depicting premarital sex indicates, if nothing else, that we’re rightly concerned about sin. But really, deep down, it also means we don’t want to see reality depicted on the movie screen. I guess Evangelicals prefer stories of perfectly redeemed people, living as we all know we should, sin-free. Which none of us can. Yes, we’re redeemed. But not a single one of us can live as though we’re already in heaven. Instead, we throw adult-sized tantrums when we step in a puddle, secretly suspecting that mud up to our ankles is proof God isn’t watching out for us. We get angry when we’re passed over for the promotion at work. We focus on ourselves when our loved ones need us to see and hear them. Whatever our individual sins, we are all fallen. And perhaps when we object to seeing sin on screen, what we’re really objecting to is seeing ourselves so exposed.

It’s striking to me that Christians consistently object to two particular sins in the movies: premarital sex and foul language. Yet it seems to me, equally serious sins are also found in Bruce Almighty: selfishness, lovelessness, and jealousy. I’ve never heard of a Christian community boycotting a movie for realistically depicting these. I wonder why.

I drove home from this movie humbled. And deeply convicted. Because this movie—for all its farcical situations and crazy clowning around—gave me an honest picture of who I am before the perfect example of Christ. I’m floored that God sees me as worthy of redemption, for I am surely as foolish and foolhardy as Bruce. This movie doesn’t answer our deepest theological questions. But it does an admirable job of beginning the conversation.

1. What was your initial reaction to the film? Why do you think you reacted that way? 2. What is the message(s) of Bruce Almighty? Consider how it addresses themes such as: the nature of reality or what is really real; what’s wrong with the world, and what’s the solution; the significance of relationships and love; the significance and meaning of being human; whether there is right and wrong, and how we determine it; the meaning of life and history; and what happens at death. 3. Where do you agree? Where do you disagree? Why? In the areas in which we might disagree, how can we talk about and demonstrate the truth in a winsome and creative way in our pluralistic culture? 4. In what ways were the techniques of film-making (casting, direction, script, music, sets, action, cinematography, editing, lighting, etc.) used to get the film’s message(s) across, or to make the message plausible or compelling? What details or background images seem to have significance? 5. In the interview on The Voice Behind, director Tom Shadyac says he speaks at spirituality conferences where “they only talk of religious movies as being ones that only deal with religion. And it’s just not true. This one just happens to have God in it so it’s viewed as a religious movie. But, so many movies are spiritual or religious movies, and people won’t see them that way because there isn’t a priest, nun or a minister.” Do you agree or disagree with Shadyac? What makes a movie religious or spiritual? If it depicts sin, does it also have to end with clear redemption or change as Bruce Almighty does, effectively telling the whole story? Or is it valid to tell only part of the story? What movies have you seen that you consider spiritual? 6. Do you agree with Shadyac that churchgoers in general have difficulty accepting humanity as it is? Where do you see evidence of this? How should Christians view humanity? 7. Shadyac points out that the Bible depicts sin, sometimes graphically. Do you think there is a difference between the way the Bible depicts sin and the way this movie does? Use the “bedroom scene” as an example. What stories in Scripture depict similar sin? 8. Shadyac’s interviewer wanted the movie to somehow indicate that premarital sex is wrong. Do you think Shadyac should have done this? Do the stories in Scripture always do this? 9. What was the role of prayer in this movie? How did the different characters pray? What sorts of things do you pray for? What does Scripture have to say about prayer? 10. What insight does the film give into the way people see life, meaning, and reality? How can you use the film as a useful window of insight for Christians to better understand our non-Christian friends? Might the film be a useful point of contact for discussion with non-Christians?