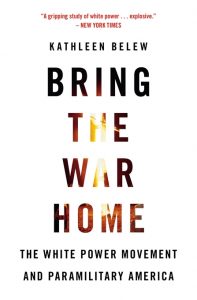 The Legacy of the White Power Movement

It is the difficult work of historians to bring order to the past. The very best historical work draws upon multitudes of sources and accounts, sifting through the minutiae of historical record to streamline the story of seemingly isolated individual events into a broader, unified constellation that can be traced from its beginnings to the looming cultural landscape of the present.

Kathleen Belew’s Bring the War Home: The White Power Movement and Paramilitary America provides just this sort of clear, compelling historical trajectory for the white power movement in the United States. Belew correctly identifies what she describes as the “white power” movement—a movement that combines the ideologies of the historical Ku Klux Klan, radical tax resistors, separatists, white nationalists, neo-Nazis and proponents of many other ostensibly religious white supremacist theologies—as a historically under-studied phenomenon with roots that go back over a century, and whose reach extends insidiously into the present day.

In the book, Belew brings two historical moments in particular to the fore as key turning points in the American white power movement. These two historical episodes crystallized a surging movement of many disparate parts into explosive radicalism that combined into a dangerous and unified theology of white supremacy, separatism and violence.

Both of these moments are important and oft-studied episodes in American history, but few historians have linked them together so compellingly to a single, growing ideology of white supremacist violence.

The Vietnam War, and its disastrous aftermath, is the first historical moment that Belew connects to the growing white power movement of the 1960s and ‘70s. Between the dehumanization of the Vietnamese enemy abroad, the continued segregation of the American military, and the “white power” rhetoric that pervaded the contentious cultural landscape of the Civil Rights movement at home, the stage was set for a subset of disillusioned veterans of this unpopular war to embrace an ideology of racism and white nationalism that festered and splintered into radical fringe groups, like the mercenary group Civilian Military Assistance, and the white power terrorist group known as the Order. When Vietnamese refugees fled to the United States in the war’s aftermath, they were met with much of the same hostile and racist rhetoric that now pervades public discourse around Mexican immigrants during the Trump Administration. The Klan and neo-Nazis pushed explicitly racist and dehumanizing tropes about Vietnamese immigrants, accusing them of carrying disease, of preying on white women, and of being rapists and sexual deviants.

Belew also draws readers’ attention to the organized intentionality behind the resurgence of Klan ideology and the white power movement in the mid-twentieth century. She reminds readers that these organized strains of white supremacist ideology were a backlash against the gains of the Civil Rights Movement. This is a particularly good reminder for twenty-first century readers in the United States, as we grapple with the legacy of Confederate imagery that often persists in government and public life. Many of the visible trappings of the American South’s heritage, such as the choice to fly Confederate flags above Southern state houses, were mid-twentieth-century decisions, made intentionally to defiantly offer visible opposition to desegregation and racial equality. It was this racial resentment, combined with the casual dehumanizing rhetoric of the Vietnam War, which laid the groundwork for the growing white power movement as the twentieth century drew to a close.

The second historical event that Belew brings to the forefront of this history is the Oklahoma City bombing of 1995—the culmination of the white power movement’s “leaderless resistance,” and the fulfillment of the promise of revolutionary violence waged by white power proponents.

Strangely, history has not regarded this bombing, the deadliest act of domestic terror in American history, as being intimately connected to the white power movement. Rather, news media and public discourse often identifies this bombing as an isolated attack carried out by a madman, a kind of “lone wolf” terrorism disconnected from the powerful strains of white power ideology that actually inspired it.

Describing this historical omission as “remarkable,” Belew dismantles this misconception piece by piece. Indeed, Timothy McVeigh, the Gulf War veteran influenced by the Christian Identity movement who carried out the Oklahoma City bombing with other radical extremists, was a perfect exemplar of the culmination of the white power movement in the 1990s:

[He] read and distributed the novel that has structured the violence of the Order; [he] chose a building that white power activists had targeted since 1983, the year they declared war on the state; [he] talked about stealing weapons from a military post and saw civilians as “collateral damage” in a war upon the federal government. His action was the work of a post-Vietnam War paramilitary white power movement that was still structuring militia violence and supposedly “lone” acts of terrorism in 1995. (p. 236)

This description of McVeigh—as a radicalized young man who fell prey to explicitly religious “holy war” ideology—provides an interesting parallel to religious terrorism of another stripe. In terms of both the promises made in recruitment materials (of military prowess, power and heroism) and of fringe religious identity, much of the white power rhetoric of the twentieth century that Belew describes is very similar to Islamic radicalism in the vein of groups like al-Qaeda and ISIL, who operate with uncanny similarity to some of the fringe radical terror movements that twist and pervert—but claim to represent—Christianity.

Belew tracks this long history of ostensibly religious messaging as a tool for white power radicals throughout history, from the Klan to the Christian Identity movement of the 1980s and ‘90s. Writing in 1981, for example, Louis Beam, a white nationalist and Vietnam War veteran who trained children as young as eight years old in armed guerilla tactics, wrote, “A sword in the year of our Lord 1981 can be an M-16, three sticks of dynamite taped together, a twelve-gauge, a can of gas, or whatever is suitable to carry out any commission of the Lord that has been entrusted to you.”

Thirty-four years later, in 2015, Dylann Roof, a young white man who self-radicalized on the internet by reading the works of Beam and other white power movement radicals, created an online manifesto, posting photos of himself wearing Confederate and Rhodesian flags, and quoting extensively from earlier white power movement materials that urged proponents to foment a race war in the United States. On June 17, 2015, Roof walked into a church in Charleston, South Carolina, and murdered nine black parishioners during a Bible study. It was a tragic reminder that the legacy of the white power movement has never left us.

This is the greatest strength of Bring the War Home—that the book carefully lays out a case for understanding white power not as a series of acts perpetrated by individual racists or extremists, but as an organized social movement with deep historical roots. Understanding this history is integral to preventing future violence, and it provides crucial context for debates over racial ideology that still rage on today.

Ruth DeFoster teaches in the Hubbard School of Journalism and Mass Communication at the University of Minnesota. She holds a PhD in mass communication and is the author of the book Terrorizing the Masses: Identity, Mass Shootings and the Media Construction of ‘Terror.’