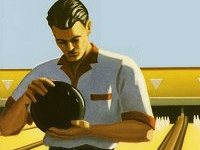 Gone bowling lately? If you have, chances are you enjoyed the nation’s favorite leisure activity by yourself, according to Harvard Professor Robert Putnam, author of Bowling Alone: The Collapse and Revival of American Community. Not only are Americans bowling alone (participation in league bowling has decreased by 40% since 1980 while individuals bowling increased by 10%), we apparently are disengaging from almost all types of social activity.

Putnam’s ambitious project includes sifting through hundreds of research studies on American social behavior conducted over the past century. His conclusion: we’ve grown increasingly isolated from one another and lost massive amounts of “social capital.” Membership and participation in nearly every major civic and social group has declined over the past forty years. We are an increasingly isolated, anonymous collection of non-neighbors.

Social capital refers to the connections among individuals that produce social networks, reciprocal norms, and trustworthiness. According to Putnam, social capital is the most crucial element and indicator of stable societies and individual life satisfaction within those societies. The degree to which people participate in civic organizations, entertain neighbors in their homes, volunteer in community efforts, and participate in church activities contributes as much, if not more, to societal productivity as efficient manufacturing plants or an educated work force.

Putnam’s theory of disengagement struck a cord from the moment he published an article with the book’s title in the Journal of Democracy in 1995. Putnam was profiled in People magazine, invited by President Clinton to Camp David, and endlessly interviewed on talk shows. An inevitable backlash produced cries from soccer moms, self-help group organizers, and other social critics who argued that Putnam did not account for their experience or pet theory. Indeed, when Putnam surfaced newer research, he not only reasserted his disengagement hypothesis, he discovered he had actually underestimated how disconnected we had become.

Many factors have contributed to the “civic malaise” according to Putnam. The biggest culprit has been the lack of a unifying crisis like war, depression, or natural disaster. These kinds of galvanizing moments occurred regularly in the early part of the twentieth century and so affected those generations living and coping during the crises. However, later generations have known only relative peace, stability, and freedom to follow their consumeristic bliss.

Short of a crisis, Putnam argues that it will take both collective and individual initiative to replenish social capital and to renew civic engagement. New structures and policies will need to be created that foster such growth. Putnam offers six spheres in which budding “social capitalists” can work toward social renewal: community service projects, family and civic-friendly workplaces, integrated living and public spaces, active and tolerant faith-based communities, community engaged leisure time activities, cultural activities, and political activities. On the last page of the book, Putnam urges us to “reconnect with our friends and neighbors.” He recalls Henry Ward Beecher’s society-building advice from a century ago—“multiply picnics”—to drive his point home.

1. It appears as if Putnam has accurately interpreted the massive research he has uncovered and so, it is no wonder that he has received such attention in the press. Does Putnam’s disengagement thesis ring true in your experience and observation of civic life? How? Where? In what contexts?

2. Are you “connected” with your friends and neighbors? How would you describe “being connected?” What hinders connecting? What do you do to connect?

4. How much does or should the church take up Putnam’s call to multiply picnics? Where would such picnics take place? Who would be invited? What form could these picnics take? What goals would the picnics have?.