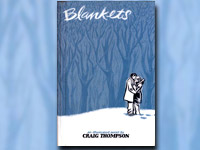 Though it’s earned me just 4 sheets of state-approved paper and roughly 1,064 cups of coffee, I make a living as a student and writer. I’m a part of the church. Some days, when I put these two autobiographical bits together, I have to work to fend off discouragement; I am both grateful for and fairly confident of my calling (as a writer more than a student), but when I consider the number of churches that would both affirm and support what I see as gifting and ministry, I sometimes feel uncomfortable. I imagine visiting a church alongside a missionary, and I have this picture in my head: We are both given 15 minutes to stand before the congregation and talk about what the Lord has done for us and in us and, as we envision, what he will do through us. Then the request for support. Two baskets are passed around, one labeled “missionary” and one “artist.” The baskets come back. The missionary’s basket flows over with encouraging letters and banknotes. My basket comes back with one piece of paper on which some joker’s drawn a fish and a loaf of bread. After the service, while the missionary is shaking hands and juggling conversation, I remind myself that I’m no victim, that I am loved, and that I do love the church. I tell myself the missionary probably needs the support more than I do. I hate making these qualifications. I go home and read Blankets by Craig Thompson.

Now you’re probably thinking about a segment of the population that you find, at best, eccentric. The legitimacy of that judgment aside, we don’t tend to equate comic books with maturity, intellectual engagement, or, and maybe especially, spiritual searching. Which may be part of the reason Craig Thompson has eschewed the label “comic book” for Blankets, which he calls an “illustrated novel.” Blankets, though paneled and inked, is not a comic book. What it is is a beautifully illustrated, linear account of one character’s struggle to reconcile his artistic talent with the message he’s grown up hearing: “God has already created things well enough—why does He need you to try and add to it? Go on, get serious, grow up, go into real ministry, child, and be a godly man.”

If you pick up Blankets, you’ll likely notice two things straightaway. One, it’s heavy, 582 pages. Despite its mass, when I opened it for the first time, I didn’t close it until I’d finished it. Then I passed it on to a friend, who did the same, who passed it on to a friend, who did the same. A few months ago, I posted a call for response on my website to people who’d read Blankets, asking for their critiques. Everyone who responded mentioned reading the book through in one sitting. Maybe we’ve done so because the genre is new to many of us, but more likely because the writing is as good as the drawing. I’m no art critic, so I can’t successfully describe or explain the use of brush and pen as artistic techniques, but I do know that whatever Thompson chose, it works—thick, dark strokes measure heavy words, for instance. The story, though, is what keeps me reading. This is a novel, but it’s also thinly-veiled autobiography, as Thompson admits in several interviews.

The second thing you’ll notice is the drawing on the cover: Two adolescents stand huddled in the snow, a thick forest as backdrop, and it looks cold: one picture saying 582 pages’ worth of words.

Blankets takes the reader through roughly the first 20 years of the character Craig’s life. He grows up in the rural Midwest with his younger brother Phil and two parents, who teach them a relatively conservative Christianity. Early in his life, Craig displays both an affinity and a talent for drawing, which is quickly dismissed by Sunday school teachers as a waste of time: “I mean, ‘COME ON, CRAIG.’ How can you praise God with DRAWINGS?” one teacher says. Whether Thompson is quoting directly from memory, the message he received as a child is clear: Good Christians go into missions work, or full-time ministry, all the while preparing for and verbally witnessing people into Heaven, where we’ll all be worshipping, which activity will leave no time for doodling. At one point, in the spirit of compromise, the adolescent Craig considers using his drawing as a witnessing tool, but when he pictures it in his head, he realizes what cold comfort that is.

The cover illustration introduces the reader to that idea, that if we go to the church with our creativity, our imagination, our art, we’ll have to leave it at the door, left stripped of an essential part of our identity, left partially unclothed and looking for something to replace it. Church activities, rebellion, relationships, or addiction—when we forfeit a fundamental part of ourselves as creatures made in the image of God, we always look for substitutes, for wholeness, for blankets that provide more than cold comfort. For Craig, his blanket comes in the form of Raina, a girl he meets at a high school church retreat. Raina loves his art, his imagination, his creativity, and returns it in kind. When he visits her and her family at one point, she gives him a blanket she’s hand-sewn, beautiful and creative and warm.

Though the book covers much ground—the church as mass marketing program, sexual abuse, distance between parents and children—the relationship between Craig and Raina is the center of the narrative arc, and rightly so, as first loves tend to be the defining stories of our adolescence. Craig sees in Raina so much of his restoration, so much of his innate understanding of what he thinks Jesus should be like: warm, creative, encouraging, beautiful. The picture of Jesus that Raina embodies is, understandably, much softer, much more protective, more attractive than the Jesus held forth by the Christianity he’s known. It’s no surprise that Craig’s (and Blankets’) conflict lies chiefly between this beautiful, particular, individualized version of Christ and the confining, herd-mentality version presented by the church of his youth. This is the struggle that pulls both Craig and the reader through the book, and the one that the book and Craig leave the story with, unresolved. Don’t mistake this for lack of resolution within the book; rather, Craig does make decisions, ones that are refreshing and honest, though not final. I don’t know where Craig Thompson the person stands now on these issues, but his art has given me reason to consider anew both what effect I, as part of the church, have had and am having on those who are looking for shelter and whether I am presenting Jesus as blanket or cold comfort.

I continue to pass this book on for two reasons. First, it’s a beautiful work of art; it’s aesthetically well-crafted. Second, the church needs to hear voices like this. Not every Christian would find this book appealing or worthwhile. It’s not a “Christian” book. It is a voice crying out from the cold, a beautifully illustrated example of a sheep that Jesus would leave the 99 to rescue. We need continually to refine our hearing, to listen for these voices. Generally, we say “yes” to art, though in an abstract way; meanwhile, we disillusion the makers of art when we offer little practical support, little encouragement, little room to stretch out and draw. Pastors, laypersons, deacons, seminary presidents—all would do well to hear. And I’m convinced that if every youth group leader were to read this, his own approach to understanding and interacting with the church’s youth would be the better for it. And whether youth or twenty-somethings or forty-somethings, the church will always host people on the fringes, those looking for a creative, imaginative, beautiful sanctuary, for a place that affirms them as image-bearers; those who are legitimately struggling to understand and discern their disillusionment with church; those who find satisfaction, like Thompson, in leaving a mark on a piece of blank paper.

A friend of mine who read Blankets said it made her think of doodling, on church bulletins, for example, and youth group scribblings. She said she thinks back to all the marks and drawings in the margins of teenagers’ papers and wishes she’d have paid more attention to them, looked in those markings for calling, both in the vocational sense and the for-help sense. I’ve sat in pews behind children and teenagers and adults who, while the pastor was expounding on text, drew and scribbled furiously. Some of that may be boredom, and some of it an authentic expression of one’s faith. Either way, it reminds me that we are image-bearers, likenesses of a God who himself loves art, who scribbled furiously in sand and ordered ornate temple sculpture and gave John a vision of the new heaven and the new earth wherein cultures will come to God with their artisans and poets and comic book illustrators alongside the shepherds and singers.

The church is not always, or necessarily, The Church, but it’s one of, if not the, primary institutions that God has established in order to display the beauty of his righteousness, and we should never cease questioning the art required in displaying Jesus to and through those who both hunger for and create beauty and warmth. A comic book has reminded me of this.