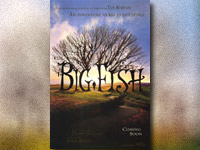 Edward Bloom is dying of cancer, and his son, alienated from his father, makes one last visit in hope of finding out the truth. Edward Bloom is a man known for his storytelling, all of his stories revolving around the one about the big fish. What Will seeks is the truth behind the fish, and whether the facts behind the man are as important as the man himself.

1. Emotionally, what was your response right after the film, and was there any disjunct between your emotions and your intellect? If so, what are possible explanations for that? 2. The opening scene introduces the presence of formalism (i.e. on the spectrum opposite realism [documentary]). How did you respond to the fantastical opening? Do you think it was appropriate? 3. Did you find yourself siding either with Edward or Will more at the beginning, and why? 4. At the beginning, Will seems to be embarrassed by his father. Why? Is there something else besides embarrassment? What is the relationship between this and the importance of “seeing ourselves in our fathers”? Will says also that “we were like strangers who knew each other very well.” Do you find that to be a common sentiment? The writer of the book says that his father “used his charisma to keep people at a distance.” How does this inform your understanding of the relationship between Edward and Will? 5. Regarding the witch’s eye, Edward says that knowing how you’ll die makes living easier. Do you agree with that? Are there things we tell ourselves to comfort us in our mortality, whether in the chronological or figurative face of death? What are they, why do we do this, and is it appropriate? As a Christian, do you find Edward’s understanding in Scripture anywhere? 6. Will says several times that he needs to know the truth about his father. What might be his motives for this? Do you see an analogy between the town of Specter and the culture’s common conception of Heaven, or at least Utopia? In the book this film is based on, the poet Norther is given only three lines, but he plays prominently in the film. When Edward asks to see the poem that Norther has been working on for 12 years, there are only three lines—is this a critique of the Christian notion of Heaven? What might the screenwriter and director be intimating here regarding creativity, Heaven, and even Christianity itself? Is there a basis for such a critique? How would you respond? 7. With Edward, we hear and see a lot of reference to growing out of things, to moving on, to experiencing bigger and better and more dangerous and exotic. Why is this appealing? Is there a danger to this kind of thinking? He also says, “Truth is, I’ve been thirsty my whole life. I never knew why.” How do you understand that statement? 8. Do you see a biblical parallel for Edward’s time at the circus? 9. Regarding Amos, Edward says that most things we consider evil are just lonely. How do you respond to this? Is there truth in that statement? 10. As the movie progresses, do your feelings for the young Edward change at all? Do you see him as a symbol for something larger? Is he in any way a story of the American dream itself, and what is the place for that kind of story? 11. When asked if he loves his father, Will says that “everyone loves him...he liked his second life better... the reason he tells these stories is that he couldn’t stand the one [life] he had....” Why does he say all this in response to that question? What does this reveal about his understanding of love? 12. Soon after, Will also says, to his father, that when he realized all those stories weren’t true, he felt like a fool to have trusted him. How does this add to your understanding of Will’s conception of love? What role does trust play in loving relationships? Is there ever room to change the truth out of love? 13. When we hear from the doctor the real story of Will’s birth, the truth becomes even harder to discern. What was your response to this revelation, as well as to the garage scene? 14. What is the importance of Will telling the “eye story” to his father? He mentions a few times how things feel “different somehow,” or “changed” or “lighter.” Why is this language important? 15. In the eye story, all of Edward’s friends are at the river waiting and clapping for him. First, what was your emotional response to that scene? Then, what does this reveal about Edward’s thirst, his longings, especially since Edward calls this story the “story of my life.” Will finishes by saying “you become what you always were.” What does he mean? When Will finishes the story, Edward says “exactly.” The son telling the father a story is itself the ending that he saw in the eye—why is this important? By the end of the film, we see that most of Edward’s stories are rooted in reality, but they’re selective. What part of this is unwitting human condition, and how much is conscious? What explains this? What is the biblical importance of remembrance? 16. Tim Burton, the director, calls this a movie about stories and myths. What do you think he’s saying about stories and myths? What role should story and myth play in our lives? How might they be more truthful and loving than the facts? 17. How do you respond to Burton’s symbolic use of aspects of Christianity?