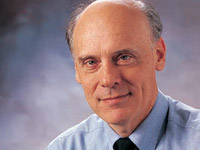 That is by no means a simple question, as Dr. J. I. Packer reminds us in his book, Knowing God. “What are we talking about when we use the phrase, ‘knowing God’?” Packer asks. “A special sort of emotion? Shivers down the back? A dreamy, off-the-ground, floating feeling? Tingling thrills and exhilaration, such as drug-takers seek? Or is knowing God a special sort of intellectual experience? Does one hear a voice? See a vision? Find strange trains of thought coursing through one’s mind? Or what? These matters need discussing, especially since, according to Scripture, this is a region in which it is easy to be fooled, and to think you know God when you do not. We pose the question, then: what sort of activity or event is it that can properly be described as ‘knowing God’?”

“In answering any question,” the late Francis Schaeffer once said, “there are at least two dragons you should be afraid of, lest in running from one, you end up in the mouth of the other.” And in the standard small group discussion, the answer to Ross’ question runs between the mouths of two very different dragons:

The God-in-the-box dragon: In the mouth of this dragon, saying “I know God” means I can answer any question about him completely. “I know” is a comprehensive statement; it means there is little or nothing about him I do not know.

The God-of-the-imagination dragon: In the mouth of this dragon, saying “I know God” means I have my own ideas and feelings about God, and in the absence of anything to restrict my imagination, I feel entirely free to call my ideas and feelings, “knowledge.”

Our day is dominated by the God-of-the-imagination dragon. Since Kant, theologies of the imagination have abounded, and claims to know God, rather than merely believe in him, have become increasingly intolerable. For the 20th century skeptic, Beyond the Cosmos may perform a valuable service: reminding him that God exists objectively and may actually be known. Ross seeks to assure the scientifically-minded that some of the traditional obstacles to faith—the Trinity, the problem of evil, miracles, sovereignty and free will—are not impossible to overcome with help from modern physics.

In so doing, however, Ross at times steers dangerously close to the mouth of the God-in-the-box dragon. In seeking to assure the believer that faith is reasonable, Ross seems at times to beg the question, “How much mystery can one tolerate and still claim to know God?”

Contradictions, Paradoxes, and Antinomies
Taking note of Ross’ definition of three terms helps the reader to understand his position:

Contradiction: a direct and unresolvable opposition between two statements, laws or principles.

Paradox: a direct but resolvable opposition between two true statements, laws or principles.

Antinomy: a direct contradiction between two statements, laws or principles in which both seem equally true and necessary.

Together with orthodox believers throughout the ages, Ross affirms that “the Christian faith is free from contradiction.” However, unlike many great Christian teachers, he also leaves no room for antinomies. Ross cites the Reformed teaching concerning sovereignty and free will, which men like Packer have decribed as an antinomy, as both undeniably true and undeniably contradictory, as a good example of bad thinking. In Ross’ words, “If only Christian leaders had recognized the ‘contradiction’ for what it is, a paradox, the church could have avoided untold damage and heartache.” Simply put, Ross believes that if a doctrine is true, it must be at worst paradoxical, never contradictory nor antinomic. Thus, the seeming contradiction in the sovereignty-free will tension (or with the Trinity or any other apparent theological contradiction) must be a problem of our perspective only.

So, what is Ross’ solution? Enlarge your perspective to include multiple dimensions.

Drawing freely upon one of the more arcane branches of modern physics (string theory, which attempts to explain the origin and structure of the universe), Ross postulates a minimum of eleven dimensions in reality, and argues that from this perspective no conflict of doctrine is ultimately unresolvable.

As a reminder of the limitations of our three-dimensional perspective, Ross’ illustration from Flatland concerning the Trinity makes its point: the fact that modern man finds it impossible to conceive of God as Three-in-One by no means makes the Trinity impossible. Still, as a true explanation of the Trinity, the illustration falls far short, for God, Ross admits, remains as much a mystery in eleven dimensions as in three. “Even the best extra-dimensional analogies we humans could develop for God’s tri-unity fall short,” Ross says, “ultimately there are limits to what we can discover.” That’s an honest and (to me) reassuring admission, especially in light of the publisher-hype on the back cover of the book. Reading Beyond the Cosmos’ dust cover easily leaves the false impression that in this book, at last, the great mysteries of the faith will be made simple. In truth, Ross’ goals are less lofty, namely, to remind us that God is knowable, but that mysteries remain, well, mysterious.

Knowledge and Mystery
I, for one, rejoice in both the knowing and the mystery. Together with the prophet Jeremiah (and with Hugh Ross) I rejoice that I can know God. Let him who boasts boast about this: that he understands and knows me (Jeremiah 9:24a). The God of the Bible is no God-of-the-imagination, but a God who speaks to us in words in the Scriptures, became one of us in the person of Jesus, and teaches us now through the power of the Holy Spirit. Because of this we can know God, not just believe in Him.

At the same time, the God of the Bible is not a God-in-the-box, whose mysteries I can expose like a cheap conjurer’s trick. He is a God who not only knows Himself better that I do or can, but whose mysteries I will never fathom, as Isaiah reminds me: “For my thoughts are not your thoughts, neither are my ways your ways,” declares the Lord. “As the heavens are higher than the earth, so are my ways higher than your ways and my thoughts higher than your thoughts.” (Isaiah 55:8-9).

And it’s here that I would add a gentle word of rebuke to Dr. Ross, who despite his statements of humility can at times sound rather glib in his treatment of the great mysteries of the faith: Hugh, remember the words of C. S. Lewis on God—as with Aslan, He’s not a tame lion.

To be sure, I have other reservations about Beyond the Cosmos—e.g., Ross’ stubborn Arminianism and his tendency to make rather sweeping theological generalizations. I would warn readers, too, that at times Ross’ scientific “clarifications” of difficult Christian doctrines may seem more confusing than the doctrines themselves.

Despite my reservations, I recommend the book to those who are troubled by the Carl Sagans of our world, in the hope that Beyond the Cosmos will assure you that the questions it addresses, though troubling, are not insurmountable obstacles to a reasonable faith.

But to the rest of you, especially those still seeking to answer Ross’ first question (“Can we really know God?”), I would recommend J. I. Packer’s Knowing God as more helpful and more satisfying.

Further Reading:
Knowing God by James I. Packer (Downers Grove, IL: InterVarsity Press; 1973) 254 pp. + biblical index.
This classic has also been released in a 20th anniversary edition, with a new preface by the author plus a study guide with questions for reflection and discussion on each chapter.