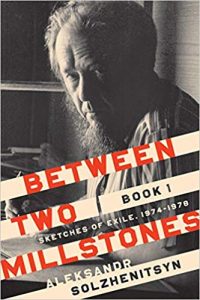 During a time of political turmoil in ancient Israel the tribe of Issachar contained “men who had understanding of the times, to know what Israel ought to do” (1 Chronicles 12:32). It is a rare gift, though almost everyone claims to have it. I thought of that as I read Between Two Millstones, the memoir of Aleksandr Solzhenitsyn covering his initial period of exile in the West. One of most important and intelligent literary figures of the 20th century, he bore witness to the brutal oppression instituted by Communist rule.

An Orthodox believer and disciplined writer, Solzhenitsyn was unprepared for life in the West where he experienced freedom and a society he failed to understand. Failing to listen, he was increasingly marginalized and misunderstood. His often bitter memoir nevertheless contains a perspective on America that is worth considering. If you haven’t read him, begin with One Day in the Life of Ivan Denisovich and Cancer Ward. His memoir reminds us that knowing the truth without knowing the times makes one ineffective.