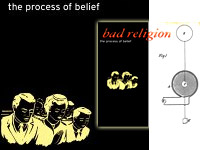 The process of belief is an elixir when you’re weak I must confess, at times I indulge it on the sneak.” ~Bad Religion

Contemporary Christians need punk rock just as they need Marx’s critique of religion, Freud’s psychology, and Nietzsche’s philosophy. All raise questions about our motives and expose our self-deceptions. Philosopher Merold Westphal writes, “We need Marx, Nietzsche, and Freud as a protest against all forms of instrumental religion, the piety that reduces God to a means or instrument for achieving our own human purposes with professedly divine power and sanction.” What unites these masters of atheism and punk rockers is their shared practice of the hermeneutic of suspicion, the deliberate attempt to expose the self-deceptions involved in hiding our actual motives behind our beliefs. The harsh point is this: atheism is closer to the truth than certain kinds of religion. Such critique is a needed spiritual discipline. Non-believers sometimes ask hard questions and keep us honest. They can be a blessing to the unthinking, self-righteous Pharisee in all of us.

Punk rock is a musical genre rooted in critique and skepticism. It has little tolerance for superficiality and hypocrisy. It has no patience for those whose convictions are based on unquestioning authority instead of the hard, honest work of pursuing truth as one understands it. Punk is characterized by musical simplicity that is melodic, fast-paced and hardcore. It is self-consciously anti-rock—a critique of the celebrity status of the rock star, the commercialization of music, and the glitz of cool. It tends to be provocative and profound, questioning dogmatism. It celebrates the individualist—the person who stands out from the crowd (even as they tend to copy each other). And finally, it promotes a social conscience in contrast to pop’s brain-numbing hedonism. However, most punk groups fail to go beyond a generalized-anti-everything anger in their lyrics.

But there is one notable exception: Bad Religion. “The basic core of the Bad Religion message has been to provoke independent thought, to ponder life’s complexities, to ponder bigger social problems, to realize that this is a global community,” explains guitarist Brian Baker. Bad Religion seeks to turn a passion to question authority into constructive action. BR is less political than Rage Against the Machine, System of a Down, of The Boys of Propagandhi, but far more philosophical. They are a band that asks the questions that need to be faced.

Started in 1980, Bad Religion is the granddaddy of punk bands. Rolling Stone described Bad Religion as “one of the most influential and commercially successful American punk groups of all time.” Greg Graffin was raised in Racine, Wisconsin, but moved to California in 1977 when, at the age of twelve, his parents divorced. There in the midst of his stoned and shallow peers at El Camino High School, he was an instant outsider. Punk, he described years later, “is a form of music that appeals to people who feel that they don’t fit in society and people who are skeptical about the world they live in.” In the high school culture, like always finds like, and soon Greg befriended Brett Gurewitz and they set out to critique their surroundings. They chose the name Bad Religion and their crossbuster insignia because it was calculated to anger parents. “Religion,” they explain is “any kind of social group that prescribes a certain way of thinking.” Greg had been raised in the Church of Christ by his mother, but was alienated from religion by the age of fifteen. (Divorce and absent fathers during the early teen years have a long history of stimulating atheism, as Paul Vitz shows in Faith of the Fatherless.)

Father can you hear me? How have I let you down?
I curse the day that I was born
And all the sorrow in this world
Let me take you to the hurting ground
Where all the good men are trampled down
Just to settle a bet that could not be won
Between a prideful father and his son

The band got an early break when their self-titled EP received airtime on the popular local KROQ, on the punk program “Rodney on the Roq.” The group cut several albums (Bad Religion, 1981; How Could Hell Be Any Worse?, 1982; and Into the Unknown, 1983) with limited commercial success because Brett was siphoning off money for a growing heroin addiction. Personal problems among the band led to a group hiatus in the mid-1980s.

Bad Religion is described as the thinking person’s punk band because of the academic pursuits of singer/songwriter Greg Graffin. He completed a B.A. in Anthropology, a B.Sc. and M.S. in Geology at UCLA and is completing his Ph.D. at Cornell University in evolutionary biology-paleontology. His personal philosophy dominates the band’s persona and appeal.

Gurewitz is equally influential. After kicking his drug habit, Gurewitz went on to form Epitaph Records, the largest and best-known punk label in the world. In 2001, Graffin and Gurewitz reunited to produce their fifteenth CD, The Process of Belief.

The Process of Belief is not a concept album with a unified theme, but it is a call to question skepticism and taken-for-granted beliefs, and an appeal to rationality. In 1998, the scholarly publication, The Wilson Quarterly, asked two leading intellectuals, Richard Rorty at Stanford, and Edward O. Wilson from Harvard, to answer the question, Is everything relative? Rorty, ever the postmodernist philosopher, argues against any form of unified knowledge. In contrast, Wilson, a biologist, argues that science gives us the means to explain the world through a few basic natural laws, of which evolutionary biology stands supreme.

Bad Religion, as reflective of Graffin’s worldview, lies somewhere in between—rational and objective in its critique of others, but skeptical and subjective in its solutions. “There is no supernatural element in human life and there is no evidence to support a dual nature to the universe,” he writes a fan.

(It’s easy) to confuse grand design with life’s repercussions
Lament not your vanquished fantasy
It’s only destiny
Why do you consent to live in ignorance and fear?

Bad Religion is a postmodern variant of materialistic humanism. If a belief cannot be proved by science, one best hold it loosely. Religion and other dogmatic beliefs, the band argues, are held by those committed to ignorance and fear, a point made earlier by Freud.

I’m materialist, call me a humanist
I guess I’m full of doubt
So I’ll gladly have it out with you
I’m a materialist / I ain’t no deist
It’s there for all to see so don’t talk hidden mystery with me

And yet, Graffin struggles with the persistent questions that haunt all materialists —particularly the question of determinism and human significance, and relativism and the problem of evil. Graffin’s doctoral advisor, a professor at Cornell writes to a troubled BR fan, “Like you, I first became an atheist, and then worried about human free will for a long time, more than 10 years, before becoming confident that it is a pernicious and destructive social myth.” In fact, everything Bad Religion disagrees with becomes the product of a “social myth.”

But materialistic determinism has ethical implications. “I do not believe there is any such thing as an absolute good in the universe. Essentially, each civilization has created their own unique ethical systems which have varied through time but haven’t shown any directionality.” But if morals are culturally derived (“we are the prey and culture is the predator”), passed to us through our parents, there is no ultimate standard to appeal to; only the determined outcomes of genes and society. How, then, can Bad Religion stand for anything? How can it critique consumerism, globalism, ecological neglect, cultural imperialism, and nationalism? Can its moral critique be based on these metaphysical assumptions?

A new age of reason, bring treason to trick the mind
What good is searching if nothing’s there to find?
We arrive at this place of no return my brothers
Only to discover that our minds have led us away
So far from the painful truth of who we are
What’s right is wrong, what’s come has gone
What’s clear and pure is not so sure
It came to me
All promises become a lie, all that’s benign corrupts in time
The fallacy of Epiphany

There is a certain irony in the intellectual framework Graffin has adopted —evolutionary paleontology, the study of fossils. For there is no aspect of evolutionary theory more in question today, even by staunch Darwinists. Harvard professor Steven Gould writes, “The failure to find a clear ‘vector of progress’ in life’s history is the most puzzling fact of the fossil record.” “We paleontologists have said that the history of life supports the story of gradual change, all the while really knowing that it does not,” echoes paleontologist Niles Eldredge. Enormous leaps of faith are regularly made on the thinnest shreds of fossil evidence.

But science carries the prejudice of authority in our world. Evolutionary biology and its philosophical twin, metaphysical naturalism, are themselves taken-for-granted assumptions in the academy as well as pop culture. Religion ain’t mainstream here. So where is the hermeneutic of suspicion now?

I suspect that Graffin and his colleagues have been isolated in a world of musicians and graduate students where certain political positions are accepted and certain philosophical assumptions unquestioned. It is doubtful that the members of this highly intelligent and provocative band have met Christians who are both capable of such dialogue and appreciative of their questioning the unquestioned assumptions of most believers. They pose both a challenge and a corrective.