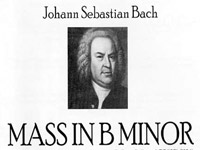 J.S. Bach was born in 1685 into a quite renowned musical family, so it shouldn’t be too surprising that he spent his 65 years as an organist, choir director, and composer, nor that several of his children became fine musicians themselves. He wrote an incredibly large body of compositions that covered all the forms, instruments, and styles of his day, including cantatas, oratorios, passions, masses, and chorales for the church; orchestral concertos and suites, concertos, keyboard works for clavier, harpsichord, and organ; and solo and chamber works for all sorts of various instruments. Unfortunately, many of his works have been lost over the years. His widow even found manuscripts being used after his death to wrap fish at the local market.

Even with numerous compositions, he was best known in his lifetime for his virtuoso organ playing. It seemed he could play anything, and improvise whenever called upon. Unlike his contemporary GF Handel, Bach was a “homebody” in that he seldom traveled far from his workplaces. While Handel was composing works in England and enjoying a cosmopolitan career, Bach seemed to be concerned with his local church, his 22 children, and his composing and playing, unconcerned about being known internationally.

I would like to offer one piece of his for our consideration: his Mass in B minor. Bach sets the text of the mass to music in quite a different way than his renaissance predecessors. In order to understand this difference, I would suggest listening first to one of Palestrina’s settings, the graceful and radiant Pope Marcellus Mass, written at the end of the 16th century Italian renaissance. Listen in particular, say, to the Gloria movement, a setting of the text:
Glory to God in the highest, and peace to His people on earth; we praise you, we bless you, we adore you, we glorify you…

Notice how Palestrina’s setting has a clear, transparent texture? Each line’s entrance moves step-wise, that is, there are few large leaps from one note to the next, mostly syllabic style, that is, generally one note per syllable, and the parts have no aggressive rhythms or dynamics. Each word is said only once. The tone of the work is gentle, calm, and radiant, encouraging reflection, and contemplation of the beauty of the sounds for their own sake. Imagine hearing this work in St. Peter’s church in Rome, and you’ll get a sense of the awesomeness of the sound. There are no instruments, rather it is sung in the “chapel style” or “a cappella.”

Next, listen to the same text set by JS Bach in his Mass. Immediately we are set upon by the full baroque orchestra, trumpets, strings, timpani, and woodwinds in a dance-like celebration. Jaunty rhythms everywhere, melismatic opening statements from each voice entering (that is, many notes in succession all sung on just one syllable), and each choral group enters singing the words, “Gloria in excelsis Deo” over and over, as though stating the theme/text one time only would simply not be joyful enough. Also, there are trills, frills, and a generally ornamented time of it, bringing to mind the sort of ornaments one might find in the high baroque churches in Germany and Italy, compared to the clear, unadorned but graceful lines to be found in high renaissance churches and buildings in Florence or Rome.

Notice too, how when the text changes from, “Glory to God in the highest!” to “And on earth peace…” Bach switches musical gears in order to offer peaceful, restful music. This sort of tone painting is to be found throughout this work, and in baroque choral music in general. The melodies reflect the meaning of the words being sung. One of the characteristics of this period is the opposite of the high renaissance: the words and the emotions they engender dictate the manner and tone of the music, rather than the order and form of the music dictating how the text is to be sung.

Toward the end of this movement, you will find a great example of Bach’s counterpoint. He sets the text, “Et in terra, pax hominibus bonae voluntatis” or, “And on earth, peace to all men on whom His favor rests.” Each entrance is with the same melody to begin with, and then each makes way for the next entrance without departing the scene. The eventual 4-part counterpoint is elegant and a marvel, giving the listener a great example of Bach’s ability to weave unity and diversity together into one fabric without ever losing either. It also seems to keep the listener whole by simultaneously amazing the mind as well as charming the heart with its gentle expressiveness. This is Bach’s great genius: his music reflects his view of the world that man is made up of both mind and emotions, and the creation is both unified and diverse at the same time.

Listen to the setting of the text “Et incarnatus est” or “And was incarnated” from the Credo of the mass. Notice how the melodic lines interpret and reflect the text? As each choral section enters, its line descends to us just as He did in His incarnation, and when they get to the words, “ex Maria virgine” or “of the virgin Mary,” notice how gently she is treated, as the most mysterious of all conceptions (which are plenty mysterious already) takes place.

Compare the setting of the “Crucifixus,” ending with “passus, et sepultus est” (died and was buried) with the beginning of the next movement that follows directly on its heels, “Et resurrexit.” Perhaps this is not going to be heard as quite the emotional roller coaster it was when it was first heard, what with the film scores and rock music we hear daily today, but for the day, it was quite impressive, and still is when played well in the concert hall or live sanctuary. Listen also to the suspensions (a sort of harmonic dissonance) found on the first beats of each bar, resolved on the second (and usually on the syllables “-fixus”). The physical pain of the event is recalled, as well as the emotional pain of those who witnessed it. This is a very powerful way to include the listener in the experience, vicariously placing him or her at the foot of the cross.

The Bach Mass in B minor is one of the great works of western civilization, and can justly be spoken of in the same breath with Shakespeare’s plays, and the paintings of Rembrandt. These are just a few of the many discoveries to be made listening to this great work, hardly scratching the surface of even those movements I have mentioned. I hope these initial thoughts will whet your appetite to listen carefully to the entire work.