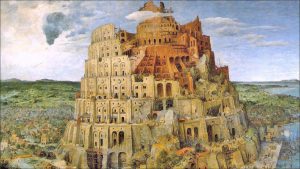 Let us build ourselves a city, with a tower that reaches to the heavens, so that we may make a name for ourselves and not be scattered over the face of the whole earth.
—Genesis 11:4

The demolition blast was so intense
it blew away their common tongue.

Across the plain of Shinar,
parts of speech shrapneled the ground.

Syntax rained down like gobs of tar.
Nouns whirled in vortices of brick dust.

Mute, the people stood owl-eyed
in a heavy ash-fall of vowels,

shielding themselves from verbs
that ricocheted through the hush,

while spores of language settled
on their hair—Algonquian, Basque,

Belarusian, Maori, Tamil, Aleut—
and sprouted into an unspoken longing

for empty homelands only distant offspring
would reach via land bridge or reed boat,

borne by a shockwave of syllables
and a hunger for a name older than words.

Kathleen L. Housley’s latest biography, Tranquil Power: The Art and Life of Perle Fine, will be published my Midmarch Arts in 2005. Fine was an abstract expressionist whose paintings convey an austere metaphysical quality. Housley holds the honorary position of affiliated scholar at Trinity College in Hartford, CT.

Editor’s Note: “Babel” first appeared in Image (Spring 2005; #45) p. 64, and is reprinted here with the generous permission of Kathleen Housley and Image. We recommend Image to you, a quarterly journal exploring faith, art, and mystery which will nourish your imagination, mind, and heart (www.imagejournal.org).