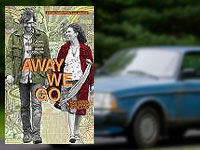 Co-written by Dave Eggers.
Away We Go.
Yup, co-writer on top.

That was what the big block letters read on the marquee at the Uptown Theater in Minneapolis when I drove past yesterday looking for a parking spot. It was an overt way of acknowledging what everybody already knows: the main reason to see Sam Mendes’ new film Away We Go is that one of the most arrestingly talented writers at work today—creator of McSweeney’s publishing house, founder of 826 Valencia, an innovative writing center for kids (that sells awesomely hip pirate gear, besides), author of the cult favorite A Heartbreaking Work of Staggering Genius and co-writer for the upcoming film adaptation of Where the Wild Things Are—was the man behind the screenplay. (Eggers’ co-author was his wife, Vendela Vida, a noteworthy novelist in her own right.)

And Away We Go is classic Eggers. All that we love in his fiction —the mordant humor, the offbeat situations and settings his peculiar characters land themselves in, the sense of drifting hope for something substantial to hold onto within the profusion and confusion of GenY culture —is here in abundance.

The story follows the long road trip of Burt and Verona, a restless young couple played by John Krasinski from NBC’s The Office and Maya Rudolph of SNL fame. They’re expecting a child and want to find a place to settle down and make a home. At first they think that place might be near Burt’s parents. But, nope, the grandparents-to-be are heading to Belgium. What, you’ve never heard of fifty-somethings packing up and hightailing it when Grandchild Number One is on the way? Burt and Verona haven’t either. So, bewildered but staying on course, they scratch Plan A off the top of their list and head to Phoenix, where Verona’s old boss Lily (Allison Janney) lives. You can’t help but feel a twinge of sadness when you realize Lily is Burt and Verona’s only real friend —and she’s so gratingly annoying that even they can only take so much of her. Turns out, Plan B won’t work either, and it’s off to Tucson.

This pattern —visit to a new place, realization that it doesn’t seem quite like home, forging ahead to yet another destination —gets repeated, so that Burt and Verona’s journey becomes a kind of collage of snapshots of late modern American life. Here there’s none, or at least very little, of the suburbia-hate that distinguished Sam Mendes’ previous films American Beauty and Revolutionary Road. But there is a sort of disillusionment, a questing wistfulness, lurking beneath the surface of even the funniest scenes in the movie. Burt and Verona are searching for the right place to put down roots, the right people who can be neighbors and friends, the right way to go about learning how to be parents.

In what is maybe the most poignant chapter of the story, Burt and Verona make it as far as Montreal and show up at an understated, very lived-in brownstone where their old college friends, Tom and Munch (played endearingly by Chris Messina and Melanie Lynskey), now live amid the happy chaos of four adopted kids. At last, they —and we, the viewers— see the kind of family to emulate. The multiracial child quartet seem to love their parents and to be responsible, likable kids. More surprising is the way Tom and Munch haven’t lost their zest for life; they still slip out for nights on the town and drink too much on occasion. Their youthful, hospitable personalities are infectious. Somehow, something has gone right. Theirs is a normal, happy, healthy family. Could the end of Burt and Verona’s journey be in sight?

The night they roll in, Tom and Munch take them out for dinner and drinks. They wind up at a club. Verona slips away for a few minutes. Munch, slightly inebriated, takes to the stage for a slow dance. It’s just Tom and Burt at the table. And despite their tipsiness, the conversation turns serious. We’ve been trying for a baby, Tom tells Burt. First it’s one miscarriage, then two, then…. “I just wish I could make it work for her,” Tom says. “If I could fix it all and just make a baby for her. It’s terrible feeling this helpless, man.” This dark tone bleeds into the next scene as Burt and Verona dash off to Miami to be near Burt’s brother, whose wife just left him and their daughter.

Christians understand and identify with the longing for home at the heart of this film. We’re exiles, according to Scripture (see 1 Peter 2:11), and, like Burt and Verona, we struggle to feel fully settled. Those of us shaped by our many re-readings of Wendell Berry’s essays and novels also understand the more specific longing for a place—a piece of land and a house with a view to call our own, enjoyed and shared in community. With Berry’s cadences ringing in our ears, we want to say to Burt and Verona, “Don’t give up on your longing. With enough quiet cultivation of unpopular virtues like patience, hard work, and consistency, it just may come true.”

And yet, we Christians also understand the ache that remains even after the dreams come true. We have a theological grammar with which to name the miscarriages that befall even the worthiest mothers, the abandonment that even the kindest husbands and daughters often experience. We live in the shadow of the Fall, east of Eden. Our teeth chatter and our bodies shake from the destabilizing aftershocks of Adam’s sin and God’s consequent judgment of death. And even after God has drawn near to rescue us through the life, death, and resurrection of Jesus, we see a world not yet fully permeated by the fullness of that rescue. “We groan inwardly,” writes the apostle Paul, “as we wait eagerly for adoption” (Romans 8:23). “Here”—now, in this life—“we have no lasting city,” adds another early Christian, “but we seek the city that is to come” (Hebrews 13:14).

At every stop on Burt and Verona’s road trip, nothing turns out quite as hoped for. No place on their itinerary seems like the place they’re searching to find. In the movie’s final moments, they wonder if maybe it’s best to try one more place they haven’t yet: the house, now abandoned, where Verona grew up, right on the shore of the Atlantic in South Carolina. Easing the car along the quiet, kudzu-draped road up to the house, Burt asks, “Is it starting to look familiar?”

“I think so,” says Verona. “I want it to… But I also want it to be new, you know? New for us? New enough to feel like we found it. Does that make sense?”

Finally they arrive. They get out of the car and walk up to the house. The front door creaks as it unlocks. The back door swings open to reveal a vista of ocean. “This is really us, don’t you think?” Burt says, in a tone of hushed reverence.

Our calling as Christians is to elevate that hope. Beyond seaside houses and babies and promises of lifelong love, we hope for more. We hope for a return to Eden, a final healing for our primal ache.

1. Away We Go invites comparison to other films about hippie wanderers and anxious twenty-somethings. What aspects of the film might be illumined if you watch it alongside Zach Braff’s Garden State and The Last Kiss, Ted Demme’s Beautiful Girls, Charlie Kaufman’s Eternal Sunshine of the Spotless Mind, or even Sean Penn’s Into the Wild? 2. With which character(s) did you most identify? Why? 3. The NYT critic A. O. Scott concludes that while you may like Away We Go, it does not like you—meaning that the film is meant to be more of an attack than a feel-good flick. It’s true that Sam Mendes has garnered something of reputation for being a biting social critic, primarily because of American Beauty. To what degree do you think Away We Go is a critique of (post)modern American life? Does its lacerating wit ever come back to critique its protagonists also? If yes, how so? If not, why not? Who escapes attack in this film, and why? 4. What was the view of marriage communicated in this film? What were the differences between Burt and Verona on marriage? Why did they differ? 5. Did you admire Burt and Verona? Why or why not? 6. Is Burt and Verona’s quest a selfish one? Why or why not? Do they want a place that they can share? Or do they hope for a retreat from the demands of love in community? How do our longings for home and a place of our own fit in (or not) with the Gospel’s call to love others selflessly, including our enemies? 7. Burt and Verona’s felt need is for a home. If you were to approach a conversation with them about Christ and His love, how would you delve deeper, below the surface of their felt need? How would you help them see the connection between their hope for a home in America and their ultimate desire (acknowledged or not) for an eternal home?