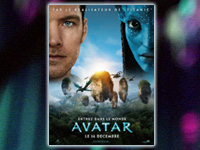 To See or Not to See Avatar: A Movie Review

Why, perhaps, you should see Avatar
I know all the good reasons not to.

Yes, the story’s been told before—and better—in Dances with Wolves. Lonely American serviceman meets beautiful native girl who opens his eyes to a new way of looking at the world and in so doing brings him into conflict with his own people. One of the strengths of Costner’s film is character development; in Cameron’s film everyone screams “caricature” from the male and female leads down to the militaristic bad guy. Not since the old westerns of my youth have I seen a film in which it was so clear who you should cheer for and who you should boo as soon as he/she walks on screen as in Avatar.

And yes, I’ve heard the reports—and been appalled by them!—of parents naming their children Neytiri (Avatar’s warrior-princess heroine), Pandora (the planet), even Toruk, after the giant winged-steeds of the blue-skinned Na’Vi. It’s like naming your kid Artoodeetoo or Ceethreepio.

And yes, watching Avatar does feel like eating too much junk food: it tastes good going down, but isn’t very satisfying. There’s a reason for this. Avatar’s unabashed nature-worship has already been round the block a few times in Hollywood in films from Star Wars to The Lion King. While pantheism’s box-office appeal has been proven, philosophically it’s still lite beer, as Ross Douthat explained in his New York Times review:

Religion exists, in part, precisely because humans aren’t at home amid these cruel rhythms. We stand half inside the natural world and half outside it. We’re beasts with self-consciousness, predators with ethics, mortal creatures who yearn for immortality.This is an agonized position, and if there’s no escape upward—or no God to take on flesh and come among us, as the Christmas story has it—a deeply tragic one.

If you’re looking for enlightenment, Avatar doesn’t offer it. Still the film has received 9 Oscar nominations (including Best Picture) and as of this morning has raked in an astonishing $2 billion in box office receipts so far. And I can’t help but wonder why. The easy answer is to point to Avatar’s obvious strength: it is visually stunning. Watching Avatar was my first experience with a 3-D film, and while I must admit that wearing the glasses felt a little goofy, they did open wide the doors of Pandora. Paying an extra 3 bucks for the 3-D version of the film was well worth it. Avatar’s a shoo-in for the Best Visual Effects Oscar.

But is Avatar’s popularity due only to its good looks? I don’t think so. Like it or not, Cameron has touched a nerve with this film, and in so doing he’s laid bare a deep dissatisfactionin the way modern people look at nature. At the end of his The First Three Minutes, Nobel Laureate Steven Weinberg observed:

As I write this I happen to be in an airplane at 30,000 feet, flying over Wyoming en routehome from San Francisco to Boston. Below, the earth looks very soft and comfortable—fluffy clouds here and there, snow turning pink as the sun sets, roads stretching straight across the country from one town to another. It is very hard to realize that this all is just a tiny part of an overwhelmingly hostile universe. It is even harder to realize that this present universe has evolved from an unspeakably unfamiliar early condition, and faces a future extinction of endless cold or intolerable heat. The more the universe seems comprehensible, the more it also seems pointless.

The dilemma Weinberg describes is a familiar one: in making the world understandable and—to a degree—controllable, naturalistic science has also stripped it of its mystery and beauty. In Avatar, Cameron seeks to restore that beauty in the name of pantheism. In Miracles, C.S. Lewis reminds us that as followers of Jesus Christ we’re better equipped for that task:

Only Supernaturalists really see nature… To treat her as God or as Everything, is to lose the whole pith and pleasure of her. Come out, look back, and then you will see… this astonishing cataract of bears, babies, and bananas: this immoderate deluge of atoms, orchids, oranges, cancers, canaries, fleas, gases, tornadoes, and toads. How could you ever have though this was the ultimate reality? How could you have ever thought that it was merely a stage-set for the moral drama of men and women? She is herself. Offer her neither worship nor contempt. Meet her and know her. If we are immortal, and if she is doomed (as the scientists tell us) to run down and die, we shall miss the half-shy and half-flamboyant creature, this ogress, this hoyden, this incorrigible fairy, this dumb witch. But the theologians tell us that she, like ourselves, is to be redeemed. The ‘vanity’ to which she was subjected was her disease, not her essence. She will be cured, but cured in character, not tamed (Heaven forbid), not sterlized. We shall still be able to recognize our old enemy, friend, playfellow, and foster-mother, so perfected as to be not less, but more, herself. And that will be a merry meeting.

No book or film is ever really understood, until one understands what makes it attractive. If you don’t see it in Avatar, look again.

1. What did watching Avatar leave you thinking about? Discuss your first impressions here, not your considered conclusions about the film. 2. On one hand Avatar is an other-worldly fantasy. On the other it is very much a critique of this world. Where in Avatar did you see criticisms of the current state of our world? Which assessments do you agree with? With which do you disagree and why? 3. The central character in Avatar—Jake Sully—is a wheelchair-bound marine who dreams of freedom. What did freedom mean to him? How did he find it in Avatar? 4. The technological hook on which Avatar hangs is the ability of human scientists to transfer one’s consciousness—memories, feelings, etc—into a different body, a body that is not human. Is this notion appealing to you? What assumptions does it make about human nature? 5. The indigenous people of Pandora, the Na’vi, are presented as morally superior to their human counterparts. What makes them superior? For the Na’vi what distinguishes right and wrong? 6. To the Na’vi what gives nature value? What gives nature value to Avatar’s humans? Biblically what gives nature value? 7. Commenting on his film director James Cameron said, “I think there’s something amazingly satisfying when the hammerheads come out of the forest and start mowing down all the bad security enforcers.” Did you cheer this scene? Why or why not? 8. Avatar’s Chief Bad Guy, the evil Col. Quaritch warned Jake Sully, “Out there, beyond that fence, every living thing that crawls, flies or squats in the mud wants to kill you and eat your eyes for jujubes.” In contrast Neytiri told him, “Our great mother Eywa does not take sides, Jake; only protects the balance of life.” In your opinion which statements fit nature better? Why? 9. Discuss C. S. Lewis’ quote at the end of the review. How should the biblical promise of nature’s redemption inform our stewardship of nature now? 10. If you had the privilege of watching Avatar with James Cameron, what questions would you want to discuss with him after the movie? Copyright © 2010 R. Greg Grooms