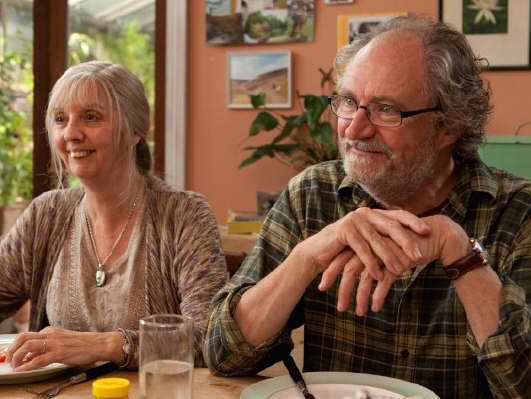 Features & First Impressions
1. Over at the San Francisco Chronicle, Mick Laselle writes about Another Year that it “is not for Mike Leigh beginners. It’s long and seems longer; it’s depressing on an epic scale…” Across at the Chicago Sun Times, Roger Ebert states, “Leigh’s Another Year is like a long, purifying soak in empathy.” As you reflect upon the film, what is your first impression? Is this film depressing or empathetic? If you like neither of these, then what mood or emotion would you say characterizes this story? What sense or feeling now lingers with you?

2. This movie has a rather minimal storyline. Instead, it is structured around the four seasons of the year. Did you miss an obvious narrative? Did you feel this added to the film and to appreciating its emphases and characters?

3. Mike Leigh is a British writer-director who has produced a series of films respected for their instinct, insight, and sympathy. He is frequently lauded for his gifts of observation, humor, and depiction of bruised humanity. In what ways (or in what scenes) did you see these kinds of traits?

4. What other films came to mind as you viewed this film?

5. Did your viewing this film draw you back to life experiences or social interactions you have witnessed or been part of?

1. Aside from Tom & Gerri, who are the main characters in the story? In what season of the year and in what condition of life are they introduced to us? What do we know about these people? (e.g. What is their occupation? What is their relationship to Tom & Gerri? How well do they relate to others? Which needs are made known? How does the way in which Mary and Ken dress help us understand their difficulties/need?)

2. Concerning the various friends in Tom & Gerri’s life, what would you say is their collective struggle? What cautionary message do you hear and see illustrated in these characters lives?

4. From the point of view of much contemporary cinema, Tom & Gerri’s marriage is a rare treat; this couple is comfortable, wise, happy, loving, and living in complete accord. What do you think of their married life? Did this seem a caricature of real life, or a comforting reminder of what marriage ought be?

5. Frequently, the characters that Leigh writes and directs allow us to see ourselves. What did watching these characters and their situations allow you to see in yourself and/or in the relationships you sustain?

1. Based upon discussion so far how would you summarize what this film is about? How do the opening and closing scenes contribute to this understanding?

2. Is there any ‘gospel’ in this film? (If so, what ‘good news’ is present? And how does this speak to the ‘bad news’ that is present?)

3. Although unintended by the film’s author, nonetheless, I see echoes of what the Church/the Christian life should be in the actions and interests of Tom & Gerri. Can you guess at what and where I see such?

4. If my take away is a depiction of the Church and/or the Christian life ought look like and involve, what do you take away with you from your having viewed this film? (What encouragements? What challenges? What lessons?)

• Mike Leigh collaborated with his actors for five months to create their characters and the world of their characters. The actors then improvise extensively during rehearsals, and the result of those improvisations become the basis of the final script.

• This film was shot in just twelve weeks. But to simulate the four seasons of a year, cinematographer, Dick Pope, used four different film stocks, and a great deal of attention was paid to props so that the passing of time would appear believable.