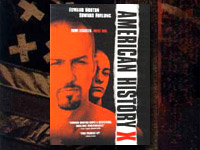 American History X is an in-depth, often-brutal look at a white supremacist subculture in southern California. Danny Vinyard, a high-school student, is asked to write a paper on his older brother, Derek, a skinhead and former leader of a local movement. Interweaving narratives and employing flashbacks, X leads us through the changes in Derek’s life and puts us in Danny’s shoes, asking us whether we, with Danny, are willing to change, as well. Due to a number of brutally violent scenes, we recommend discernment when showing the film, but we feel, given the nature of the subculture being investigated and the issues at hand, that they serve the film and can be worth struggling through. X explores the nature of hatred, idolatry, and racial reconciliation intensely and honestly—sometimes with brutal honesty.

1. What is your emotional reaction to the film? Do you think the brutality of the film is warranted, or do you view it as simple “shock factor?” 2. What is the purpose of the beach scenes opening and closing the film? What is the difference between the two? Why did the director decide to film the flashbacks in black and white? 3. Danny writes his Mein Kampf paper as a way of “expressing himself.” For the sake of dealing with people as they are, dealing with them honestly, what role should freedom of expression take? Principal Sweeney refuses to give up on Danny; was he being naive? Is there ever a point where we should give up on people? 4. Why does Danny go along with the assignment, even though Principal Sweeney is black? 5. Derek recruits “insecure, frustrated, and vulnerable kids.” Why do you think he attracts these people? Are those people responsible for their actions, or victims of propaganda, or both? 6. How, specifically, does Derek get the initial group to follow him? Is there any truth in what he says? Why are people so loyal to him? What does this say about human desires? Where do these desires come from? How does idolatry fit into this? 7. Are there any differences between groups like this and the historical KKK? How prevalent are groups like this in our society? What is the Christian’s responsibility in light of your answer? 8. Are we born racist, or is it cultural? What do you think the film-maker is suggesting? How important are previous generations, especially parents, in developing our beliefs? Do parents’ values and beliefs inevitably emerge in their children? As a Christian, how does this affect your understanding of generational sin? Do Christians have a responsibility regarding the sins of their fathers? What are the subtle ways that we perpetuate racism, of any kind, in our families? 9. Derek shows integrity on the basketball court: when given the opportunity to call a legitimate foul, he says, “Not on game point, Danny.” In his household, both he and Danny show love and concern for the family (think of Danny flying his little sister around the room). How can people with such hatred and such hate-based worldviews act so lovingly at times? Are they really caring, or are they merely looking out for themselves? What does this reveal about your understanding of non-Christians’ ability to love, to care, to glorify God? 10. Why doesn’t Derek just run away from his situation after he gets out of jail? Why is he willing to help when he knows it’ll be trouble? 11. What happens in prison that begins changing Derek? Why does Derek begin to question his beliefs? What does this suggest regarding the importance of pushing people to the conclusions of their worldview? Why don’t people do this for themselves more often? 12. What role does Lamont, Derek’s co-worker, play in Derek’s change? How should Christians view the issue of race? Many Christians promote the idea of being “color-blind;” is this harmful or helpful? 13. Discuss the prison sequence, culminating with Derek’s meeting with Sweeney, as an analogy to the gospel. Specifically, Sweeney says that his help isn’t unconditional—what parallels do you see between his and Jesus’ help in our lives? 14. What does it mean to “ask the right questions” about the meaning of our lives? What are the right questions to ask? What keeps us from asking them? 15. What role does anger play in forming our worldviews? What was Derek really angry about? 16. What are your views on affirmative action? What’s good about it, first? What are its deficiencies? How should a Christian view affirmative action? What do your views reveal about your understanding of race, justice, mercy, humility? 17. Though Derek’s worldview is renounced in the film, no ideal view is offered by the characters or the filmmaker. Why not? And what should it be?