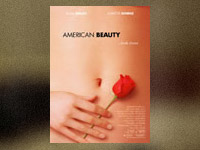 American Beauty, the first effort of director Sam Mendes and writer Alan Ball, is a remarkable production reminiscent of the best-made films of the ’60s and ’70s like Midnight Cowboy and The Graduate. Heavy in its existential despair, Beauty explores the relationship of death and art that twentieth-century painting has made its obsession. Death as a beautiful thing, rather than as the defeated enemy that faith proclaims, splashes across the canvas of this rich cinematic experience with color, texture, rich dialogue and stellar performances. Leaving the theater, the Christian soul aches for the lostness of the human condition in the last year of our second millennium anno domini.

The story traces the life of Lester Burnham through the short period between the moment that he awakens from the doldrums of his deathly, boring existence to the moment in which he dies. Using a quotation of Billy Wilder’s Sunset Boulevard, the film begins with a voice-over narration by Lester, telling us that he is dead, and promising to relate to us the events leading up to that death. If the haunting score by Thomas Newman, reminiscent of the same composer’s fragile questioning in The Player, weren’t enough, this opening moves us to the edges of our seats, and we know we are in for a long, hard, thoughtful evening.

Mendes is up to the task in every respect. His direction is fresh, innovative, and chillingly elegant. Two scenes from many illustrate his uncanny ability to make what might in someone else’s hands seem cliched or overly stylized camera work, in fact coldly realistic. The shot of a crucial scene at a basketball game where the camera isolates Lester in the stands as he fantasizes about one of the cheerleaders rings with the clarity of every viewer’s romantic notion that some moments exist just for us. Similarly, the devastating pan moving right to left from the gun that kills Lester through a profile of him to a picture of his family through a bowl of roses to the white wall soon to be covered by Lester’s blood encapsules the entire movie as a great climactic shot should. Camera work this good is as rare as icebergs in the Carribean.

Remarkable performances also abound. Kevin Spacey, perhaps the best actor in America today, takes the lead as the bumpkin Lester Burnham, though his physical attempts at stumbling and looking like a nerd are the least convincing part of his performance. He simply is too dangerous and intelligent-looking to be as milque-toast and moronic as he is portrayed throughout the early moments of the film. Nevertheless, Spacey uses his face and hands in extraordinary ways in both lustful and tender contexts of lovemaking. Not surprisingly, he gets better as his character grows more aware of his world and his own life. Annette Bening, playing Lester’s manic wife Carolyn, goes over-the-top too often, but plays the wild stereotypical freak she is with a wide range of emotions, succeeding in the difficult task of making such an extreme character believable. All three teenagers in the movie turn in superb performances, and Chris Cooper, new neighbor to the Burnhams and a fanatical Marine colonel, continues his remarkable string of in-depth character portrayals, though he is given relatively little screen time.

The movie develops so many themes in so many ways that it is difficult to focus on one. Despair, anger, teen sexuality, marital fidelity, parent-child relationships at all levels, mid-life crisis, aggressive social climbing, homosexuality, murder, suburban rot—all are powerfully stated by everything from sharp dialogue and economical editing to the rich symbol of the title “character,” a class of rose known as an American Beauty.

Tragically, however, like hungry bears scrounging in the garbage bins of a campsite, Mendes and Ball rummage relentlessly in the rubbish of suburban American culture, scattering it throughout their film. The principals in the film’s production have all described the movie as a comedy, and it has some very funny moments. But Beauty is by any stretch an ugly and difficult experience for the Christian viewer. The film is an important one, though, for Christians to see if we are to live with understanding in the midst of a society full of lost, hungry souls.

American Beauty evinces a complete lack of real hope, even in Lester’s personal discovery and resolution. At the end of the film an uncannily beautiful video reappears, shot by Ricky, the neighbor’s son and the Burnham’s daughter’s boyfriend. Reiterating what Ricky has said in so many words earlier, Lester tells us from the grave that “it’s hard to stay mad when there’s so much beauty in the world. Sometimes I feel like I’m seeing it all at once, and it’s too much, my heart fills up like a balloon that’s about to burst…” In the wake of the massive assault of death and despair we have just experienced, the encouragement that, as an emotionally drained audience, we so desperately need, almost surfaces. The shot switches to an oft-used one, flying over the neighborhood where most of the action of the movie takes place, and Lester continues: “…and then I remember to relax, and stop trying to hold on to it, and then it flows through me like rain and I can’t feel anything but gratitude for every single moment of my stupid little life…”

After an almost imperceptible pause, Spacey says, “You have no idea what I’m talking about, I’m sure. But don’t worry”—and then the movie fades to black—“you will someday.”

1. What was your initial or immediate reaction to the film? Why do you think you reacted that way? 2. What is the message(s) of the film? Where do you agree and disagree? Why? In the areas in which you disagree, how can you talk about and demonstrate the truth in a winsome and creative way? 3. In what ways were the techniques of film-making (casting, direction, script, music, sets, action, cinematography, editing, etc.) used to get the film’s message(s) across, or to make the message plausible or compelling? 4. With whom did you identify in the film? Why? With whom were you meant to identify? Discuss each main character in the film and their significance to the story. 5. What insight does the film give into the way postmodern people see life, meaning, and reality? How can you use the film as a useful window of insight to better understand your non-Christian friends and neighbors? 6. Might the film be a useful point of contact for discussion with non-Christians? What plans should you make?