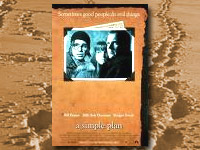 Two brothers (Hank and Jacob Mitchell) and Jacob’s friend (Lou) find a small crashed plane hidden under the winter snow with $4.4 million on board. These are small town people with not much hope of change. What should they do—keep this potential entry to the “American Dream” or give it up to the authorities? That is the question.

What does it take to make a man happy? Hank’s father, a poor workingman, had always said that “a wife who loves you, a job you love, and friends and neighbors who like and respect you” are all a man needs to be happy. Can $4.4 million make a man happy as well? Before you answer, what if this was not a hypothetical question?

The three men decide to keep the money. The plan is, well . . . simple. Hank (the college-educated one with a job) will keep all the money until spring, which is when the plane would inevitably be found. In the meantime, they will tell no one about the money. If when the plane is discovered, no mention of the money is made, then they will split the money three ways and each go their separate ways, leaving their sleepy little town forever. Sounds simple enough. But what unfolds is so complex.

Quotes and Moments
A list of the different plans the characters devise due to the failings of the first plan:
1. Keep money until spring.
2. Lou tells Jacob to ask Sheriff “Did you hear that plane?”
3. Take $500,000 back to avoid suspicion.
4. Jacob looks out while Hank returns money.
5. Hank and Jacob fake Stevenson’s crash.
6. Jacob wants to buy back the farm.
7. Lou wants a chunk of money now.
8. Tape Lou’s confession.
9. Story to cover up Lou’s death, call 911.
10. Call FBI to figure out if agent is real or not.
11. Hank steals cop’s gun.
12. Hank shoots agent.
13. Jacob wants Hank to kill him.
14. Hank burns money.

Quotes from Hank:
-My father said a man needs three things to be happy: a wife who loves him, a job he loves and friends and neighbors who like and respect him. I was a happy man.
-We killed him together, Jacob.
-We’ve just got to get through the next couple of hours and then we’re home free. (After the sheriff and agent are both killed.)
-There are days when I manage not to think of anything at all… not the money or the murders… or Jacob… But those days are few and far between.

Quotes from Jacob:
-These crows just sit around waiting for something to die so they can eat it, right. What a weird job.
-Look how square it is.
-If dad had this deal going on that we have now, he’d have never done that… (referring to his apparent suicide)
-I don’t think I should be here in the baby’s room. Its… its clean in here. Hank, do you ever feel evil? (long pause) I do… I’m evil.
-I’m going to be happy now, aren’t I?
-Make it look like the bad guy did it. I’m tired, Hank. And I’m not afraid… Just tell the little girl the bear was from me. If you love me, Hank, you’ll do it.

Quotes from Sarah:
-You need to get Lou to confess. Jacob owes you now. That’s the key.
-No one would ever believe that you would be capable of doing what you have done.
-What about me? Spending the rest of my life eight hours a day with a fake smile plastered on my face… checking out books, then coming home to cook dinner for you… (responding to Hank wanting to burn the money.)

1. Describe the “look” of this film. What elements do the film-makers use to create the world they want take you into? 2. What is beautiful about this film? What is ugly? What is mysterious? 3. Do you think the makers of this film were successful in taking you where they wanted to take you? Why or why not? 4. Describe each of the characters. What are their best qualities? What are their essential character flaws? What symbolism appears in this film? When do these symbols occur? Which symbols run throughout the entire film? What do they represent? Film as a Window of Insight—the Heart of a Man 5. On the front of the DVD case you see the words, “Sometimes good people do evil things.” On the back of the same case you read that the plan was a “lethal miscalculation of the human heart.” Are these statements contradictory? Which one is correct? Is man basically good or is there a darkness lurking in the human heart? Explain. Money and Integrity 6. Is this a movie about greed, or is it about something else? Explain. 7. Do you think this story would be different if they only found $500,000? Why? 8. What is the American Dream? Where does this dream come from? 9. Does the money change the character of the people in the film, or does it reveal their true character? Explain. When did Hank and the others actually do something that was wrong? 10. Are feelings of guilt real? Is guilt avoidable? Characters 11. Is there any one character you identify with more than the others? Who and why? 12. How are Hank and Lou alike? Different? 13. If you had to rank these characters (Lou, Hank, Sarah and Jacob) in the order of who was the most evil, how would you rank them and why? 14. If you had to rank the same characters in the order of who was the wisest, how would you rank them and why? Most consistent in character? 15. Discuss Hank’s relationship with his father. To what extent do you think Hank feels responsible for his father’s death? Responding to the Film 16. Was there any particular scene that stood out to you most? 17. This film contains some disturbing violence. How is violence used in this film? Is it used gratuitously, glorifying violence, or is it used to support the narrative and main ideas of the film? Explain. 18. What would you have done if you had been in the woods with Hank, Lou and Jacob when they found the money? What if you found the money alone? 19. It has been said everyone has their price. Do you think this is true? Has this film affected the way you respond to this answer? 20. What conclusions does this film make? Do you agree or disagree? Why? 21. Who gives you the best advice and why? 22. Has this film made any impact on the way you think or the kind of person you want to be? If so, explain?