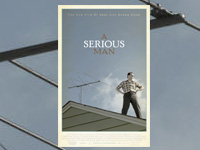 Laughing with the Devil
The devils laughs because God’s world seems senseless to him; the angel laughs with joy because everything in God’s world has its meaning. [Milan Kundera]

Humor is a funny thing. A comedian tells two jokes; he invests each with all his skill, experience, and timing. One gets a laugh, the other falls flat. Why?

Joel and Ethan Coen have been telling us jokes cinematically for years, and I’ve laughed at them all from Fargo to O Brother, Where art Thou? But their latest attempt—A Serious Man—fell flat with me, and I’ve been wondering why. It’s a typical Coen brothers film with great camera work, crisp editing, and extraordinary casting. All the elements of good humor are there, so why am I not laughing?

In A Serious Man we meet Larry Gopnik, physics professor at a small college in the mid-west in 1967. (With a nod towards Garrison Keillor the Coens once referred to their film as “Jews on the Prairie”.)

Everyone wants something from Larry that he/she has no right to. A student wants a passing grade in physics, which he is willing to pay good money for. His daughter wants a nose job. His son wants pot and rock and roll. One neighbor has laid claim to some of his yard; another wants him to join her for sex and pot. The tenure committee at his college passive-aggressively passes on ominous rumor after rumor about his standing, all the while assuring him that all is well. Worst of all, his wife wants a new man, not a younger, handsomer man, but Sy Ableman, a sort of old, fat Jewish Dr. Phil, who ironically is the only person in the film referred to as “a serious man.”

A Serious Man is loosely based on the book of Job, but instead of three friends, Larry seeks advice from three rabbis: Rabbi Scott offers him a monologue about seeing God in a parking lot; Rabbi Nachtner, a story about a dentist who finds the words “Help me” engraved in Hebrew on the back of a patient’s lower incisors. Rabbi Marshak quotes Jefferson Airplane’s Grace Slick: “When the truth is found to be lies, and all the joy within you dies.”

But Larry doesn’t want somebody to love; he wants somebody to explain to him what “Hashem”—God—is trying to tell him in this, and here’s the joke. You see, as a physics prof, Larry knows that on a quantum level the world doesn’t make sense.

The Uncertainty Principle. It proves we can’t ever really know… what’s going on, so it shouldn’t bother you not being able to figure anything out. Although you will be responsible for this on the mid-term.

So why insist religiously, philosophically that it should? That’s the Coen’s joke, and well-told as it is, I still find it hard to laugh with them, and I think I know why.

A century ago, the bane of G.K. Chesterton’s existence were slipshod typesetters who inadvertently turned the word “cosmic” in his essays into “comic”. Eventually he came to see the humor in the error.

Whatever is cosmic is comic… Unless a thing is dignified, it cannot be undignified. Why is it funny that a man should sit down suddenly in the street? There is only one possible or intelligent reason: that man is the image of God. It is not funny that anything else should fall down; only that a man should fall down. No one sees anything funny in a tree falling down. No one sees a delicate absurdity in a stone falling down. No man stops in the road and roars with laughter at the sight of the snow coming down. The fall of thunderbolts is treated with some gravity. The fall of roofs and high buildings is taken seriously. It is only when a man tumbles down that we laugh. Why do we laugh? Because it is a grave religious matter: it is the Fall of Man. Only man can be absurd: for only man can be dignified.

Larry Gopnik is the most existentially feckless character since Hamlet. He gives in where he should stand up, smiles where he should scream. Stripped of any shred of dignity, he just isn’t very funny. Feel free to laugh at him, if you wish, but remember if you do, the joke is on you.

1. What were you thinking about as the film ended? 2. Did you like the vignette about the dybbuk at the beginning of the film? How does it relate to the rest of the film? 3. Describe Larry Gopnik. Did you like his character? Do you think you were supposed to like his character? How is the fact that he is a physics professor significant? Discuss the meaning of his quote at the end of the review. 4. What’s the significance of the film’s title, A Serious Man? 5. Larry’s tragedies inspire a question in him: What is “Hashem” (God) trying to tell me? 6. What are the answers the three rabbis—Scott, Nachtner, and Marshak—give him? 7. If Larry came to you with the same question, how would you answer him? 8. The Scriptures teach “… we know that for those who love God all things work together for good, for those who are called according to his purpose” (Romans 8:28). And yet often, especially in the face of tragedy, life can seem pointless and absurd. How do you respond under such circumstances and why? How should you respond? 9. If you have seen M. Night Shyamalan’s 2002 film Signs, contrast it with A Serious Man. Which film did you prefer? Why? 10. Did you think A Serious Man was funny? Do you think the Coen brothers intended their audience to laugh? How did you respond to Grooms’ criticism that the film, though well done, just isn’t funny? 11. One film reviewer had this to say about A Serious Man: “The Coens seem to be working from a definitive stance that religion and God lead to nothing but confusion and fear. Their God, if they have one, is the cinema. And more often than not, their films speak to lovers of film more than lovers of life. But there's something about that love of film that also embraces the human experience with a striking honesty.” Discuss this quote. 12. The film ends with Larry bending to the pressure of his troubles by doing something he knows to be wrong. What’s the significance of this act? How do the Coens respond to it in the film?