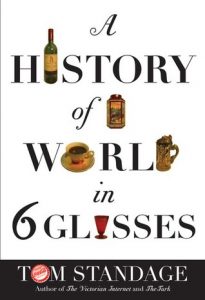 This book is good summer reading—a story full of odd facts, fascinating historical connections and humorous anecdotes that I didn’t really need to know but was glad to read them aloud to Margie so we could laugh together.

Just as archaeologists divide history into different periods based on the use of different materials—the stone age, the bronze age, the iron age, and so on—it is also possible to divide world history into periods dominated by different drinks. Six beverages in particular—beer, wine, spirits, coffee, tea, and cola—chart the flow of world history. Three contain alcohol, and three contain caffeine, but what they all have in common is that each one was the defining drink during a pivotal historical period, from antiquity to the present day. [p. 2]

Each drink Standage highlights may have started in one place but soon spread across the globe as it became popular. Beer was discovered in Mesopotamia in prehistory but quickly was found wherever human beings grew grain. Wine characterized Greek and Roman culture, and distilled spirits the American colonial period. Coffee, developed in the Middle East soon spread across the world to become the drink of the Age of Reason. Tea followed everywhere the British Empire spread in influence and domination. And in the modern era, the American development of cola produced a new drink that can now be found in virtually every corner of the globe.

Standage, a journalist living in Greenwich, England, takes care with his facts but is less interested in establishing a new outline for Western history than in telling a gripping story. He succeeds, I think, and A History of the World in 6 Glasses invites us to pour ourselves a glass of our favorite beverage and enjoy the tales involved in its development and spread as it conquered the world.