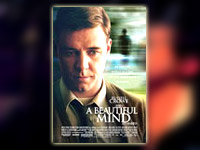 We’ve all heard the criticism: “Oh, come on; you’re making that up. It’s all in your head.” For many of us whatever the “it” was, was indeed often only in our heads, and we knew it. Multiple Academy Award nominee A Beautiful Mind is about when it is all in your head…and you don’t know it.

The film is a powerful look at the life of John Nash, a Nobel Prize winning theorist who struggles with schizophrenia. Based loosely on real events, it chronicles the association of genius with mental illness but in the context of the value of human relationships. Real and imagined, merely friendly and deeply committed, the human interactions in this movie take center stage, and their portrayal are what make this not just a good film, but a great one.

Criticized often for its blandness of technique and thoroughly upbeat ending, Mind in fact not only does not suffer from these elements, it positively requires them. Nash did largely overcome his troubles, and with just the result portrayed in the film. While there was much more darkness to his personality and to the process by which he regained functionality as a faculty member at Princeton and a Nobel laureate, Nash did in fact reach that point and did so largely through the love and help of his wife, Alicia, as the movie recounts. Even if that were not historically true, what’s wrong with a fictional art form, i.e. a movie, having a happy ending anyway? But that’s a topic for another whole essay…

Similarly, Ron Howard’s directing and Roger Deakins’ cinematography are superb, if not innovative. Far too few filmmakers are as humble as Howard. Too often the rule of thumb in Hollywood is to scream with every shot: “Notice what a genius you have before you.” Howard does not give in to that temptation but lets the surprisingly magnificent script by Akiva Goldsman (whose previous screenplays, e.g. Practical Magic, Batman & Robin, A Time to Kill, have shown little of the promise realized here) and the perfect acting of Russell Crowe (Nash) and Jennifer Connelly (Alicia Nash) carry the film. The score, casting and acting of the rest of the ensemble also deserve mention, giving the film a substance and weight worthy of movie greatness.

But enough of technique; what of the issues the film engages? There are so many, all of them important and interesting, that we are forced to choose among them for discussion. None is more central for the Christian than the portrayal of psychiatric illness.

Christians have always had a love/hate relationship with psychology. Ever since the extraordinary but erratic Sigmund Freud brought psychotherapy, the Oedipus complex and the id to prominence in the early twentieth century, Christians have wondered afresh about everything from the nature of the soul to the place of psychology in the church. No one can doubt that professional counseling has largely replaced the advice of clergy, friends or family or even the lonely struggle to overcome that many Christians viewed as their primary sources of divine help in earlier centuries.

In spite of their relative acceptance in the culture at large, psychiatry and mental illness have both gotten a bad rap from the film industry. Psychiatrists usually appear in movies as more in need of help than the clients they serve. The successful psychiatrist (as in Good Will Hunting) is often portrayed as successful by contrast to the majority of his colleagues or by eschewing more mainstream techniques for those considered “outside the box.” Christians have sometimes applauded this perspective, sometimes lamented it, depending on their own attitudes toward the hubris, or lack thereof, of the profession that can appear to supplant the need for God in trying to solve very human problems of mental distress.

Similarly, the person afflicted with mental illness is either thoroughly disassociated from society, as in Rain Man or Charly, or is a drooling moron with nothing more than a child-like intelligence, as in Awakenings or One Flew Over the Cuckoo’s Nest. Those who more normally seek counseling are rarely shown responding to medicine or fighting over long periods of time to gain control of their lives, as most patients do in real life counseling situations. Again, Christians fall between two extremes: of relegating psychological need to sin that needs repentance not therapy, and viewing that need as a substitute for sin, accepting all sin as simply illness, treatable by counseling.

A Beautiful Mind contributes to the great middle road that most Christians find themselves walking. On the one hand, the film clearly shows a disease that is complicated, slow to heal, but capable of substantial remediation. And this is not just my opinion; Dr. Glen Gabbard, practicing psychiatrist and author of the book Psychiatry and the Cinema, says the film is “one of the better portrayals, if not the best, of what the disease is like” (“A Rare Day: The Movies Get Mental Illness Right” The New York Times, Feb. 5, 2002). On the other hand, the profession of psychiatry, while sympathetically portrayed for the most part, is nevertheless demonstrated to have its limitations by showing treatment that may have some helpfulness but also have side effects that hinder the healing process.

A Beautiful Mind does not offer a thoroughly Christian perspective; John Nash triumphs by purely human effort. There is no mention of God, church, Scripture, clergy, sacrament or any other source of spiritual strength or healing known in Christian tradition. But what Mind does do is offer a realistic portrayal of one of the most difficult challenges facing humankind and the hope that that challenge can be faced and, if not conquered, at least neutralized. And the film does so with excellence and grace, reward enough for a viewing.

1. How would you describe the role of the psychiatrist in Christian healing? 2. The title of the film comes from the Nobel Prize speech with which the film essentially ends. What does it mean? 3. What can be learned from this film about psychiatric disease? What can we learn particularly from the character of Alicia Nash? 4. What is genius? How important is the discovery/creation of a new theory that may help thousands of people and solve many vexing problems if it is at the expense of a human being’s mind or his marriage? 5. What role does friendship play in this movie? How many different kinds of friendship are portrayed? Which is most important to you and why?