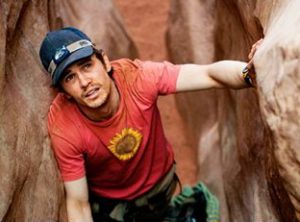 Love is a Cry for Help
A couple of years ago, when Slumdog Millionaire came out, I went to see it five times in the theater. Each time I took a different group of friends, eager to share my enjoyment with them. Each time I wept, moved by the staggeringly joyous ending, feeling what critic Roy Anker, in his review of the film, called “the soul’s deep thirst for repair of some small slice of the world’s incalculable woe.” We were given a glimpse of that repair when the two protagonists, Jamal and Latika, kiss and then cue the credits with one seriously awesome dance scene. For perhaps the first time in a very long time, a movie’s “happily ever after” ending didn’t seem trite or affected. I remember at the end of that year making a list in my journal of the high points of the past twelve months, a record of experiences that had left their mark on me. Seeing Slumdog made it on that list.

And now director Danny Boyle’s next film, 127 Hours, is playing in theaters as I write this. I’ve now seen it three times, first with my brother, then with two other couples, dear friends both. I think I probably won’t see it again, but who knows. The only time I can remember being this moved by a cinematic experience is, well, when I watched Slumdog Millionaire. And that same hunger—the thirst for what this film has given me—just may take me back to the theater for one more go.

You probably don’t need me to rehearse the plot, but just in case, here’s the outline. 127 Hours tells the true story of then 27-year-old Aron Ralston, who in 2003, while hiking in Blue John Canyon in Utah, was trapped by a chockstone that pinned his right arm to one wall of a crevice. After surviving for about five days—hence the movie’s title—on 500 ml of water and exhausting all other options (he ingeniously tried to devise a pulley with his climbing rope and carabiners, to hoist the rock off his arm), he fashions a homemade tourniquet and with a blunt pocket tool cuts off his arm and hikes out of the canyon.

At one level, it sounds like just another action movie, with maybe a bit more gore than is usual for that genre. But pinning it with that label just doesn’t capture this movie’s profundity. Why does this film grip me so much? In the first place, James Franco’s performance as Aron Ralston is a remarkable, beautiful feat of acting. I suspect it will go down as one of the great cinematic performances we have. Think about it from a purely artistic standpoint: How many actors can you name who could manage to remain compelling while dominating 90 minutes of screen time with virtually no supporting cast?

More deeply, this film explores what it means to love. (All good stories boil down to this, so if this movie is good, then it shouldn’t be a surprise that it does too.) At the beginning of the film, Aron barrels into the canyon, music blaring in his headphones. He arrives there after ignoring phone calls from his mom and sister and brushing aside his boss’s queries about where he was headed. The archetypal narcissistic loner, he fits every aspect of the stereotype: brash, enamored with his own humor (snapping pictures of himself incessantly and flirting with a couple of girls he meets on the trail), arrogant, overconfident. But by the end of the film, when the moment has come for him to decide whether to actually go through with the amputation, what ultimately gives him the courage to do so is a memory of his ex-girlfriend looking at him with a mixture of pain and pity, saying, “You’re going to be so lonely, Aron.” He’d wanted the loneliness at the time, savoring freedom from entanglements. But now, remembering her love, he has a premonition of himself having a son—hoisting him on his shoulders, holding his hands, letting him place his tiny boy feet on top of his massive man feet and walking him around the room, as if on stilts, laughing. Imagining that future—a life of family, children, love, relationships—is what gives him the final motivation to pull out his pocket knife. He realizes he’s made a terrible mistake, isolating himself, and he wants another chance to live life differently.

Aside from the sheer brilliance and zany innovativeness of the film’s technical artistry, it’s this narrative arc—from loneliness to love—that explains, I think, my enthusiasm for this movie. Near the end, when Aron has made it out of the canyon and is on the trail, his severed arm dripping blood, he sees some other hikers a little way ahead. With the triumph of Sigur Rós’s song “Festival” providing the soundtrack, he cries out, barely audible at first, “Help me.” Then, bellowing hoarsely: “PLEASE HELP ME!” The hikers hear him, turn around puzzled. Then, seeing what’s happened, they come running. That was the moment the screen started to blur as I tried to blink away tears. For me, it wouldn’t be much of an exaggeration to call that moment in the theater, holy.

Browsing the Internet recently, I stumbled across this quote from the actor Hugh Laurie:
One of my favorite moments in Star Trek is when Captain Kirk looks over the cosmos and says, ‘Somewhere out there someone is saying the three most beautiful words in any language.’ Of course your heart sinks and you think it’s going to be, ‘I love you’ or whatever. He says, ‘Please help me.’ What a philosophically fantastic idea, that vulnerability and need is a beautiful thing.

It’s when Aron asks for help that the film’s weight and euphoria reaches its climax. His vulnerability, his plea for rescue, is what leads him back into the arms of his family, back into relationships with people, back to love.

1. Did the characteristically frenetic cinematography of a Danny Boyle film enhance or detract from this particular story? Why? 2. This film includes a scene of horrifically graphic violence. How would you compare this scene to violent moments from other films? Does this scene fit on a continuum with those or does it stand alone? Is it effective, necessary? Why or why not? 3. How would you explain Aron’s looking upward to say “Thank you” once he’s free? If you don’t interpret it as a prayer to God, how else would you make sense of it? 4. Discuss Aron’s journey in the film under the heading of “conversion.” Why is Aron’s story an instance of what Christians mean when we talk about “repentance”? Or, if you don’t think that it is, why not? How has Aron changed? 5. Is this movie a “feel-good film” (as Danny Boyle has said that it is)? Why or why not? Should Christians—with our story of Creation, Fall, Redemption, and Restoration—like “feel-good films”? What makes for a genuinely happy ending?